One of the cool features that Microsoft actually added in Windows Vista is the ability to recover previous versions of files and folders. This is part of the VSS (Volume Shadow Copy Service) which allows automatic creation of backup copies on the system. Most users ā??virtually meetā?¯ this service when they are installing new software, when a restore point is created that allows a user to easily revert the operating system back to the original state, if something goes wrong.

However, the ā??Previous Versionsā?¯ feature can be very handy when other mistakes or incidents happen as well. For example, if a user deleted a file in a folder, and the ā??Previous Versionā?¯ feature is active, it is very easy to restore a deleted file by clicking the appropriate button in the Properties menu of the drive/folder that contained the deleted file. The user can then simply browse through previous versions and restore the deleted file, as shown in the figure below: 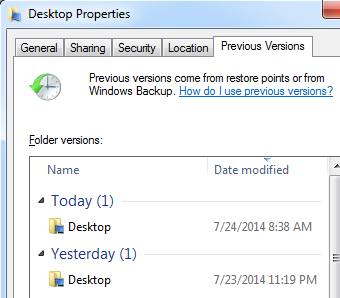 You can see in the figure above that there are actually multiple versions of the Desktop folder that were saved by the ā??Previous Versionsā?¯ feature. A user can now simply click on any version he/she desires and browse through previous files.

As we can see, by using this feature it is very simple to restore previous files. This is one of the reasons why I see many companies using this feature on shared disks ā?? it can be very handy in case a user accidentally deleted a file.

However, there are also security implications here. For example, a user can restore a file that was previously deleted and that you thought is gone. Of course, the user still needs access rights on that file ā?? if the ACL does not allow him to access the file he wonā??t be able to restore it, but in case an administrator set ACLā??s on a directory, which is typically the case, and everything else below it is inherited, the user might potentially be able to access a file that was thought to be deleted.

This cannot be prevented (except by changing ACLā??s, of course), so all we can do in this case is to try to monitor file restoration activities. Unfortunately, Windows is pretty (very?) limited in this. The best you can do is to enable Object Access Audit to see file accesses and then see what a particular user accessed. That being said, I have not been able to stably reproduce logs that could tell me exactly what version the user accessed ā?? in some cases Windows created a log such as the following:

This is event 5145 (ā??A network share object was checked to see whether client can be granted desired accessā?¯), and it is visible which copy was accessed but, as I said, I was not able to have this event generated by this constantly.

The ā??Previous Versionsā?¯ feature is very handy in cases when you need to restore a file that was accidentally deleted or modified and can sometimes even help when a bigger incident such as a ransomware infection happened. Make sure that you use this feature if you need it, but also be aware of security implications ā?? such as the fact that it automatically preserves deleted files and their modified copies.

Finally, for some reason Microsoft decided to remove, actually modify this feature in Windows 8. The ā??Previous Versionsā?¯ tab does not any more exist in Explorer (actually it does, but you need to access files over a network share). For saving local files Windows 8 now use a feature called ā??File Historyā?¯. It needs to be manually setup and it needs to have an external HDD which will be used to save copies of files. This is definitely better since, if your main HDD dies, you can restore files off the external one, but keep in mind that it needs to be setup manually. Finally, if you use EFS to encrypt files, the ā??File Historyā?¯ feature will not work on them.

"In newer variants of Cryptolocker the VSS is almost always deleted at deployment."

Thanks JH - seems like they were doing some research around this as well.
Guess it can still help, depending on the version of ransomware that infected the end user's machine.

Interested in novel ways to identify IOCs as early as possible to limit damage and allow earliest response...apart from the usual known IPs and domains etc.

VSS access on remote shares can also be useful when attempting to copy files which may currently be locked, but a previous version is still valid.

I've used this forensically to bring down registry hives from systems which I could access admin shares, but not remote registry services. Mapping whole "snapshots" of user's browser cache, documents, and the like.

Where I work, we have deployed "canary" files - custom, empty files that we place strategically on local machines and network shares. Just like taking a canary into a mine to detect poisonous gasses, these files are meant to detect unwanted activity. They are named so that they are always the very first in any folder; our AV and SIEM solutions then watch for anything touching those files (backup utils, etc, are specifically excluded) and alert immediately if anything tries to write to them. We can then cut the network port, which preserves the machine in it's "active" state so we can take it and perform some forensics on it. Seems to work pretty well, and doesn't rely on signatures, etc...