One of very important steps when performing penetration tests is to verify configuration of any SSL/TLS services. Specifically, the goal of this step is to check which protocols and ciphers are supported. This might sound easier than it is – so this will be a series of diaries where I will try to explain how to verify configuration but also how to assess risk.

We cover this in the SEC542 course (Web App Penetration Testing and Ethical Hacking), but verifying configuration is not limited only to web applications – we should do it in both external and internal penetration tests.

While one could create a small script around the openssl command to verify for all supported protocols and ciphers, it is much easier to use some of the following tools. Let’s dive in:

While some people might use nmap only for port scanning (Trinity used it for OS fingerprinting as well – good job Trinity), in last couple of years I became a huge fan of Nmap’s scripts. NSE (Nmap Scripting Engine) allows creation of scripts in the embedded Lua programming language. There are ~600 NSE scripts which are distributed with nmap today and some of them should be your everyday tools – especially for checking SSL/TLS configuration. Here they are:

ssl-enum-ciphers.nse – this is the most powerful NSE script for SSL/TLS checking. It will verify which protocols are supported (SSL3 and above) and then enumerate all cipher algorithms. Besides this, ssl-enum-ciphers will also give you a rating (score) on how good or bad a cipher is. Do not take this for granted, although generally the scores are good.

Below we can see ssl-enum-ciphers executed against my mail server. The output is pretty self-explanatory and you can see that I tried to lock the configuration a lot by supporting only TLSv1.2 and using strong ciphers, with preferred PFS (Perfect Forward Secrecy) algorithms. All of these will be explained in future diaries.

sslv2.nse – while the ssl-enum-ciphers script is amazing, it does not support SSLv2. Keep this in mind – because when you scan a network with it, it will not report usage of SSLv2 so you might miss it. This is why we have the sslv2 script, so make sure you run it everywhere.

ssl-cert.nse – this is a nice small script that will retrieve information about the X.509 certificate used on the target web site – perfect for easy collection and examination of this information on wide range of targets. We can see it running here:

ssl-dh-params.nse – finally, this is the last script I use when checking SSL/TLS configuration. This script will analyse Diffie-Hellman MODP group parameters and report if weak DH parameters are used (i.e. CVE 2015-4000 and other weaknesses).

Finally, just keep one thing in mind – whenever you use nmap make sure that you have the latest version installed (I actually pull the one from Subversion and compile it manually). Many Linux distributions come with ancient nmap versions so not only you might be missing features and bug fixes, but the scores for ciphers might be wrong.

Another great resource for SSL/TLS configuration testing is the testssl.sh script. This script comes with its own, statically precompiled version of openssl which supports every possible protocol and cipher. This way the author ensures that nothing will be missed (there was a huge hiccup with Kali Linux and SSLv2 support back in 2013 when they removed it and a lot of penetration testers got burned).

My suggestion is to clone testssl.sh from github to make sure you have the latest version – no compilation is needed. Just run it against the target web site and you will see nice coloured results as shown in the screenshot below for my server: 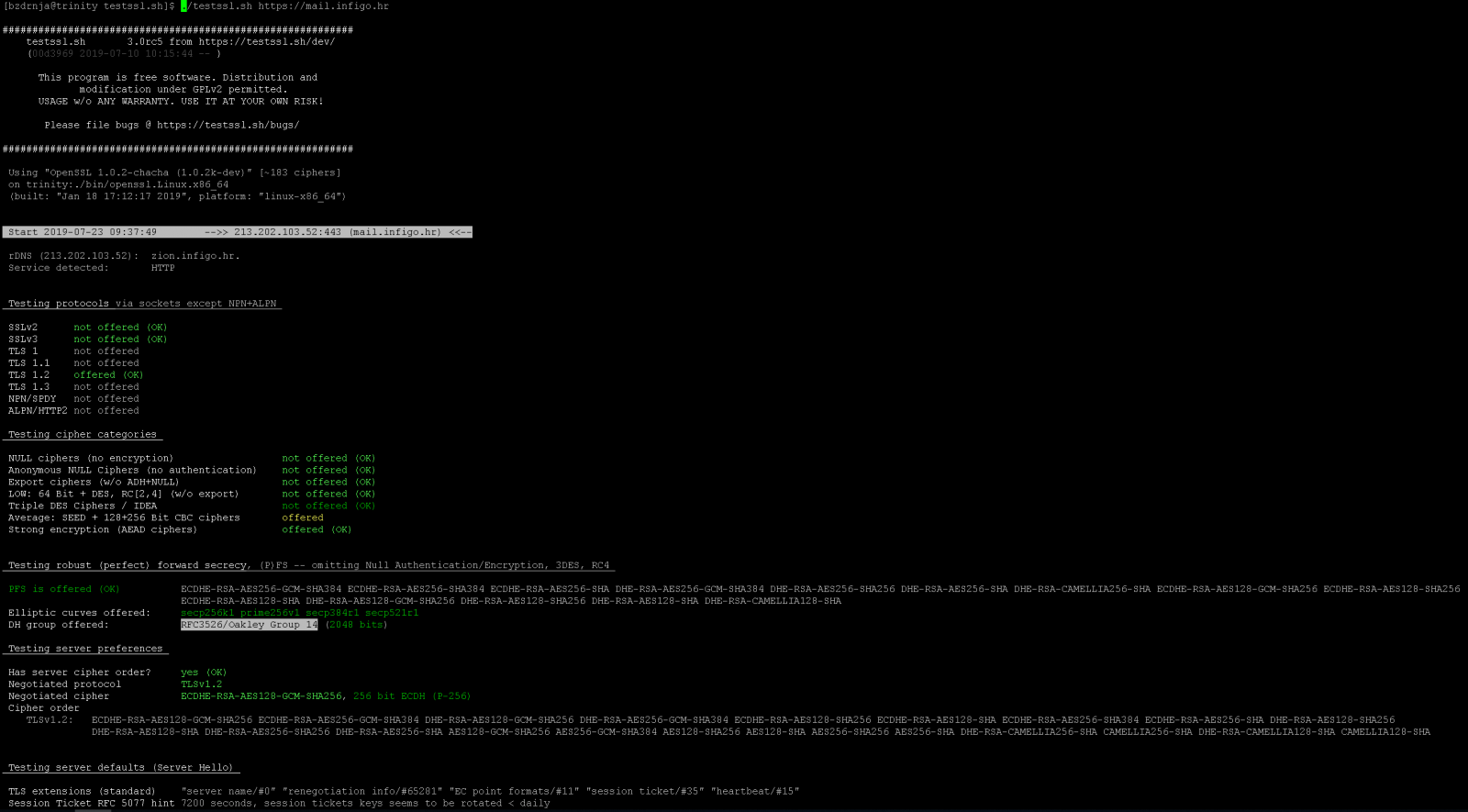 Finally, the last great online resource is the Qualys SSL Labs SSL Server Test done by @ivanristic. SSL Server Test will perform a bunch of different tests and generate a very, very detailed report on SSL/TLS configuration, together with the final score – and everyone will try to achieve A+ of course (we all like green, A+ grades).

SSL Server Test is available at https://www.ssllabs.com/ssltest/ so, obviously, you can use it only for publicly available web sites. Additionally, don’t forget to select the “Do not show the results on the boards” box so your test will not be shown on the web site.

As we can see, there is a plethora of good tools we can use. But besides running tools, we need to be able to interpret the results as well. For example, if 3DES is used on your Microsoft Terminal Server (RDP), is that a bad thing or not? Can we live with it?
I will cover all these cases in future diaries – let us know if there is something specific you would like us to write about.

An even longer presentation will be at the BalCCon2k19 conference this year so let me know if you are around!

I think https://www.hardenize.com/ deserves a shout out as well, although it is broader than just TLS configuration testing.

Here is a link to a presentation I helped put together with a peer that has some similar content to your efforts.
This presentation was given at the Rocky Mountain Information Security Conference in Denver this past June 2019.