E-mail scams, phishing and social engineering is something that we (security people) became really used to. Even from the penetration testing engagements I do, when we utilize social engineering, it’s almost always extremely successful showing that, unfortunately, people still do not pay enough attention to validity of e-mails they received.

That being said, sometimes we do encounter really good (or bad for us defenders :/) phishing attempts. Couple of weeks ago, one of our readers, Matthew Henry sent in an example of a scam against Uber users (and we know that those count in millions).

The e-mail appeared as a typical Uber receipt where it looked as the recipient was charged for a ride in France. The e-mail is shown below: 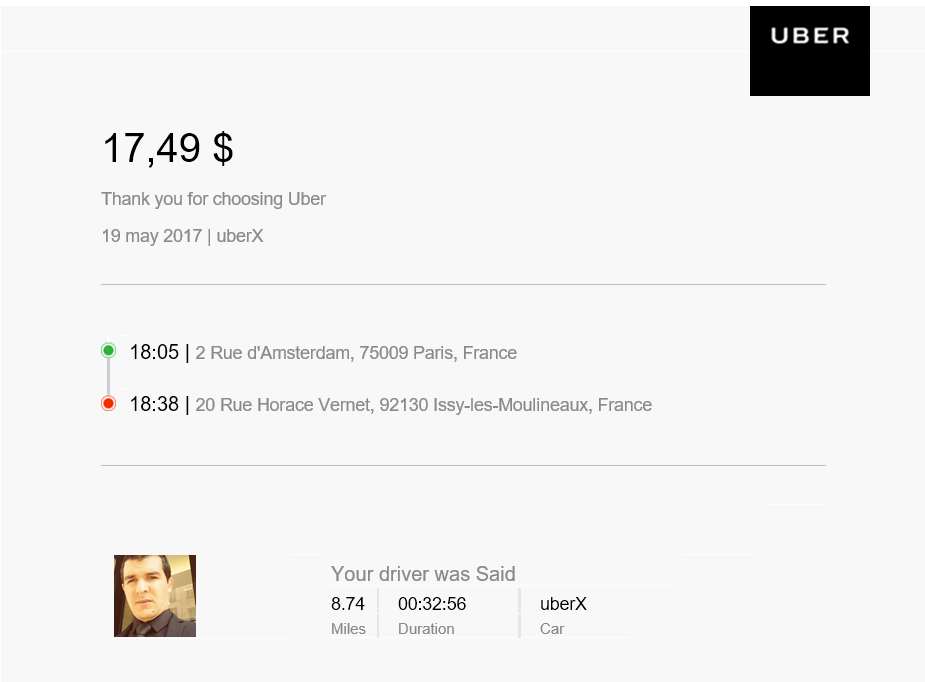 The bait was at the bottom, and you can see it here:

Of course, none of the users that receive this e-mail would have taken this trip so the phisher in this case is trying to get people to click on the link to dispute the received receipt.

See the domain? uberdisputes.com is not an Uber’s domain. At the time of the phishing e-mail circulating around, the domain was only a day old. If you visited the link shown above while it was still up, you would be asked to log in: 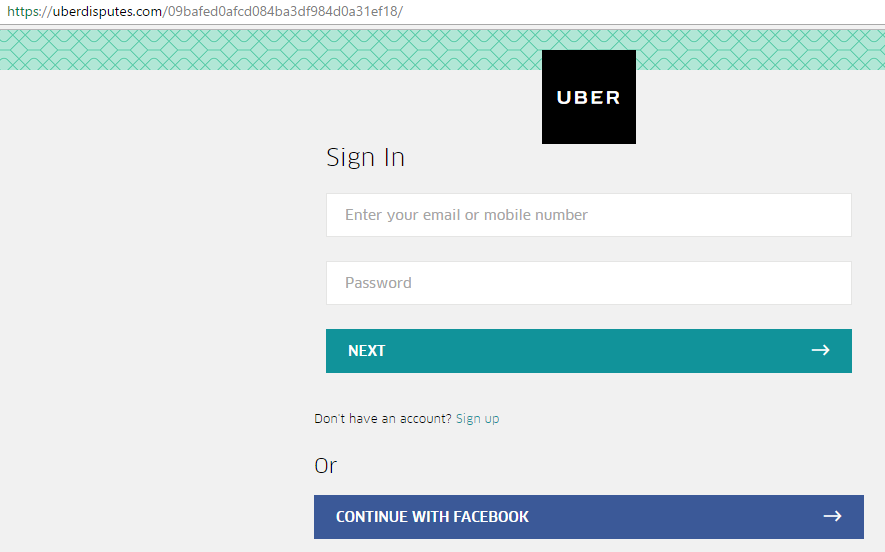 After logging in, in order to dispute the receipt, the site would ask for the credit card number, of course, so the victim can be reimbursed. You can probably guess what happened with the credit card after submission …

While all this is nothing particularly amazing, what I do find unbelievable is how easy it is for the bad guys to get certificates for such web sites. Although there has been a lot of discussion about how Let’s Encrypt can be used now for all sorts of certificates, in this example we can see that another CA, this time COMODO, happily issued a certificate for domain uberdisputes.com: 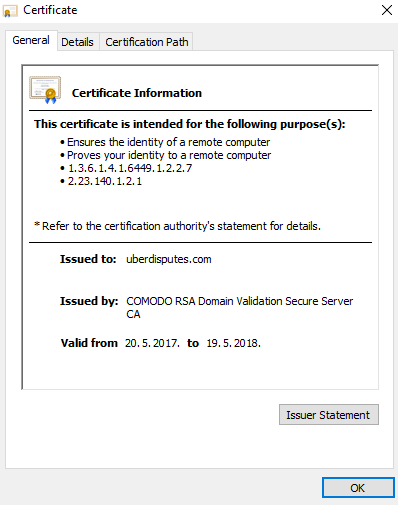 (Small rage: I wonder who was the GENIUS in Google that decided to remove SSL/TLS certificate information from the lock icon in Google Chrome. Yeah, it was a great idea to make users open Developer Tools to see it grrrr).

Such cases are very common and always make me wonder why both CA’s and big companies do not do the following:

On the matter of "reserving" certificates that appear related to certain other identities, be careful what you ask for. This is related to the issue of who gets to register domains in the first place -- issuing certificates for them is just the next step in the same chain.

It's not at all clear that someone who owns, say, yoyodyne.com should therefore automatically be entitled to claim ownership of any *yoyodyne* names as well. Just to name one potential issue, someone else might want to register yoyodyne-sucks.com as a matter of free speech. Conflict resolution could get tricky in a hurry, too. What if there's a yoyodyne.net that is not the same corporate entity? Who wins?

Net/net, any defense at this level would involve the CAs and/or registrars doing a lot of work, and accepting a fair amount of dispute resolution and argument, for not a lot of direct payoff to their own operation. Therefore, unlikely to happen -- and that just might be the best possible outcome.

Very good point and I absolutely agree with it!

Now I see that I wasn't too clear - I actually wanted to suggest that such potentially high value domain names simply go through another process when being approved, one that requires a human operator to click on "Approved", instead of having everything done automatically as it is now.

Of course, I'm also aware that is might be very difficult on how to decide on what's good and what's not.
Something to think about for sure :)

Couldn't agree more. It would be great if CA's would take a little more responsibility in that manner. I'm also fully aware that might be easier said that done since I'm not responsible for a globally trusted CA either.

Also, YES YES YES on your "small rage" item. In an age where security awareness is critical for the general public, and not just IT based folk, sure......let's hide some very useful information in the dev tools. #nerdrage

Re: #ChromeRage -- at least they left useful stuff under the Lock icon, like "MIDI Devices full control" settings!

Y'all don't want some silly 8-bit pre-80's video game theme song autoplaying on you while you get rick-rolled for your credentials from a phishing site, now do ya?

I do agree with this on some level. Registrars should do a better job verifying the domain being purchased for keywords but I also believe companies should make more of an effort to protect it's name and customers. As a pentester I like the fact that if I need a phishing domain, it is quite easy to think of one and have it available.

I already have a number of domains registered for the purpose of phishing Office365, VMware, Citrix, etc... Now I'm not talking some big long domain name that reads like a sentence, these domain names are a company name or product with an extra word related to the company and its services. Some of the domains that are available would make you cringe and think 'why on earth have they not registered this domain'...so I do it for them ;)

Just to reiterate I only use these domains for social engineering attacks on companies I an contracted with and only with their consent.