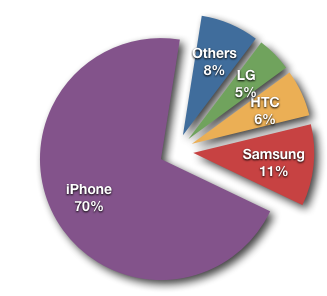 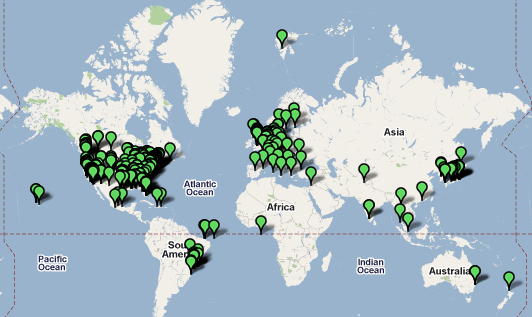 I checked my iphone 3gs photos (some of which I have on my web server). While it does have the GPS coordinates, they are very inaccurate. They seem to be off by about 5 city blocks.. The GPS in the iphone must be pretty far off.

My name is not in the EXIF data for the iphone, but the pictures from my canon do have my name (I know I put it in the camera).

The picture from upnorth:
The note says that all diary products have moved elsewhere. The picture is from Longyearbyen, Spitsbergen.

My Android phone has a setting for "Store location in pictures", which can be turned off if you desire.

The phones have several mechanisms for determining location. It can use the location of the nearest cell towers as an approximation, and those coordinates can obviously be off by quite a bit. If I turn on real GPS in the phone, it is quite close. But I choose to leave it turned off - it really sucks down the battery, and I simply don't need it 99% of the time.

Omigod - you remember how they used MMS pics of clock faces in The Wire to co-ordinate drug re-ups? Now Osama is doing it with pizzas!

John, I've noticed the same thing with my iPhone 3gs. The GPS coordinates can be wildly innacurate at times. I even see this when using applications like Latitude and Loopt....my location is often depicted several blocks from where I am actually at.

Fixed a typo in the article: it is twitpic.com, not twitpix.com.

Regarding GPS and the iPhone: The iPhone will use cell phone towers if it doesn't get a clean GPS signal. In that case, accuracy is not that great. GPS signals take a while to acquire and if you just pull your phone and take a quick snapshot, chances are that you are using the non-GPS coordinates.

Greg: "Omigod - you remember how they used MMS pics of clock faces in The Wire to co-ordinate drug re-ups? Now Osama is doing it with pizzas!"

What an idea! I bet there is a code. Maybe if you overlay a map to the pizza, the meat pieces mark attack sites. Or maybe a grid that then is used to encode words!

I've been doing this for a while. Some sites that you upload your pictures to strip exif data.. while others like Photobucket don't. I've pulled exif data on lots of pics that reveal far more than people wish to share. I used to use http://regex.info/exif.cgi but maybe i'll give yours a shot.

I include contact information in my EXIF, in addition to copyright restrictions. Several times I've found my work being used without my permission and having full EXIF brought each violation to a very swift and satisfying conclusion.

This has been going on for a while now. Digging out the EXIF data in peoples' images has been a game that some people play, kind of like Tag - "I know where you were last night!"

I use the exif utility (http://libexif.sourceforge.net) to remove or scramble the EXIF data on my images before I post them.