On Friday 2017-01-20, I checked a malicious spam (malspam) campaign that normally distributes Cerber ransomware.  That Friday it delivered ransomware I'd never seen before called "Sage."  More specifically, it was "Sage 2.0."

Shown above:  It's always fun to find ransomawre that's not Cerber or Locky.

Sage is yet another family of ransomware in an already crowded field.  It was noted on BleepingComputer forums back in December 2016 [1, 2], and Sage is a variant of CryLocker [3].  Unfortunately, I can't find an in-depth write-up on Sage that I like.  With that in mind, this diary examines Sage 2.0.

Emails from this particular campaign generally have no subject lines, and they always have no message text.  The only content is a zip attachment containing a Word document with a malicious macro that downloads and installs ransomware.  Sometimes, I'll see a .js file instead of a Word document, but it does the same thing.

Shown above:  Data from a spreadsheet tracking the malspam (1 of 3).

Often, the recipient's name is part of the attachment's file name.  I replace those names with [recipient] before I share any info.  A more interesting fact is the attachments are often double-zipped.  They contain another zip archive before you get to the Word document or .js file.

Shown above:  Data from a spreadsheet tracking the malspam (2 of 3). 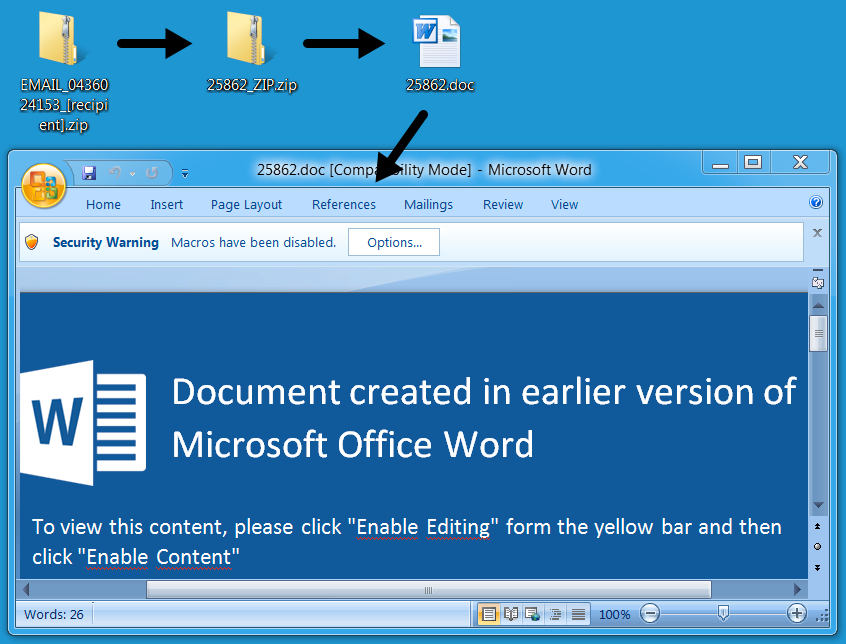 Shown above:  Example of a Word document with a malicious macro. 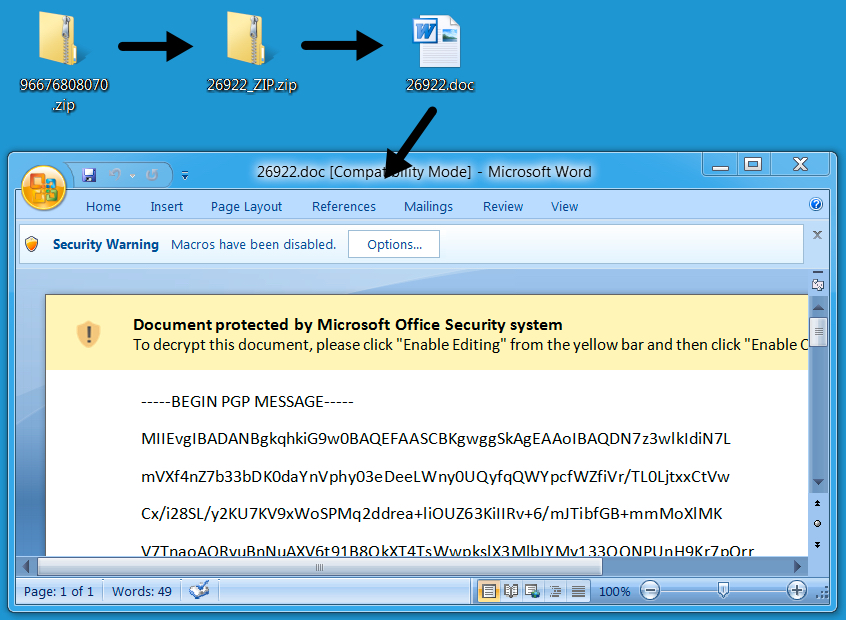 Shown above:  Another example of the Word document with a malicious macro.

The Word document macros or .js files are designed to download and install ransomware.  In most cases on Friday, the ransomware was Sage 2.0.

Shown above:  Data from a spreadsheet tracking the malspam (3 of 3), mostly Sage 2.0.

Under default settings, an infected Windows 7 host will present a UAC window before Sage continues any further.  It keeps appearing until you click yes. 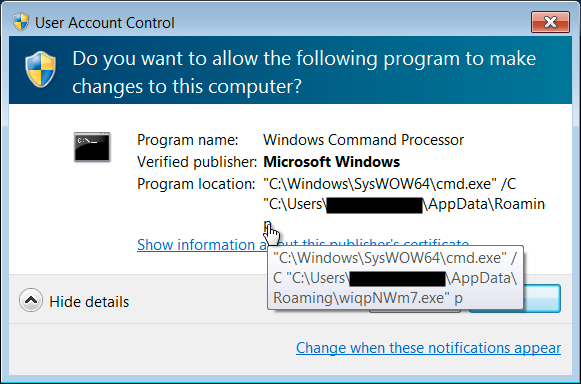 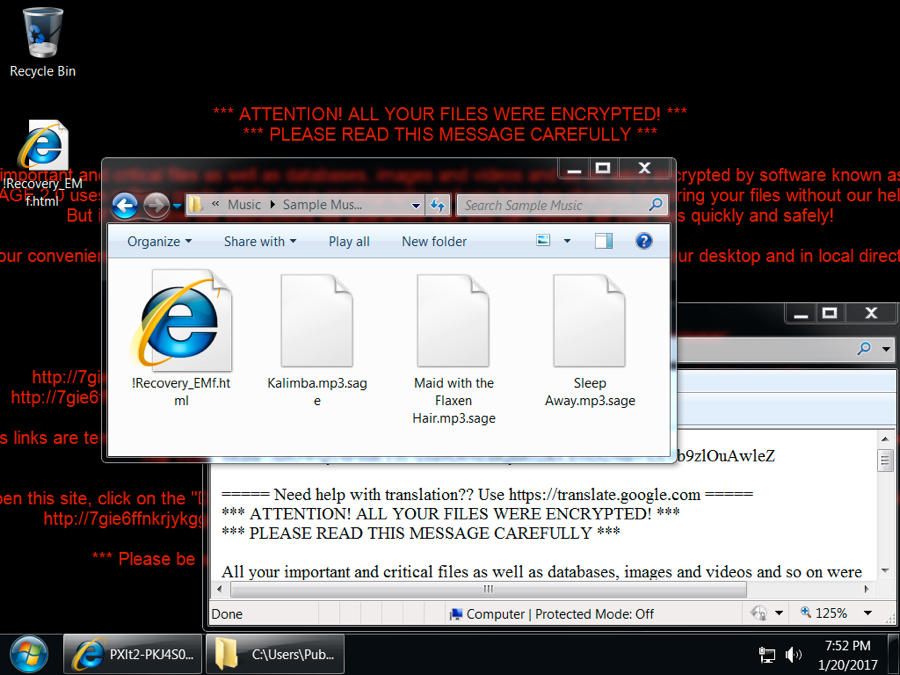 Sage ransomware is kept persistent by a scheduled task, and it's stored as an executable in the user's AppData\Roaming directory. 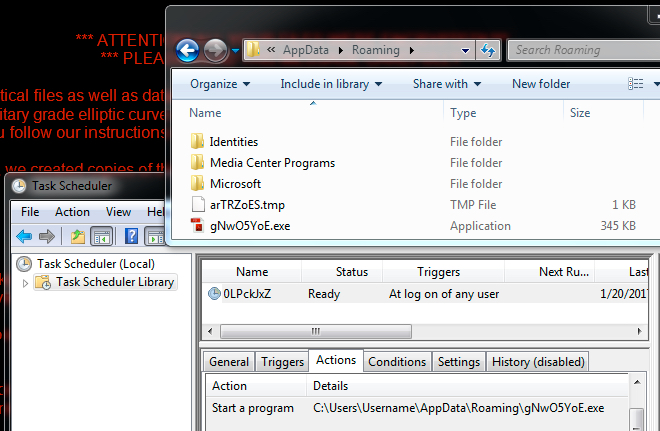 Shown above:  Sage ransomware and it's scheduled task for persistence.

Following the decryption instructions should take you to a Tor-based domain with a decryptor screen.  On Friday, the cost to decrypt the files was $2,000 US dollars (or 2.22188 bitcoin). 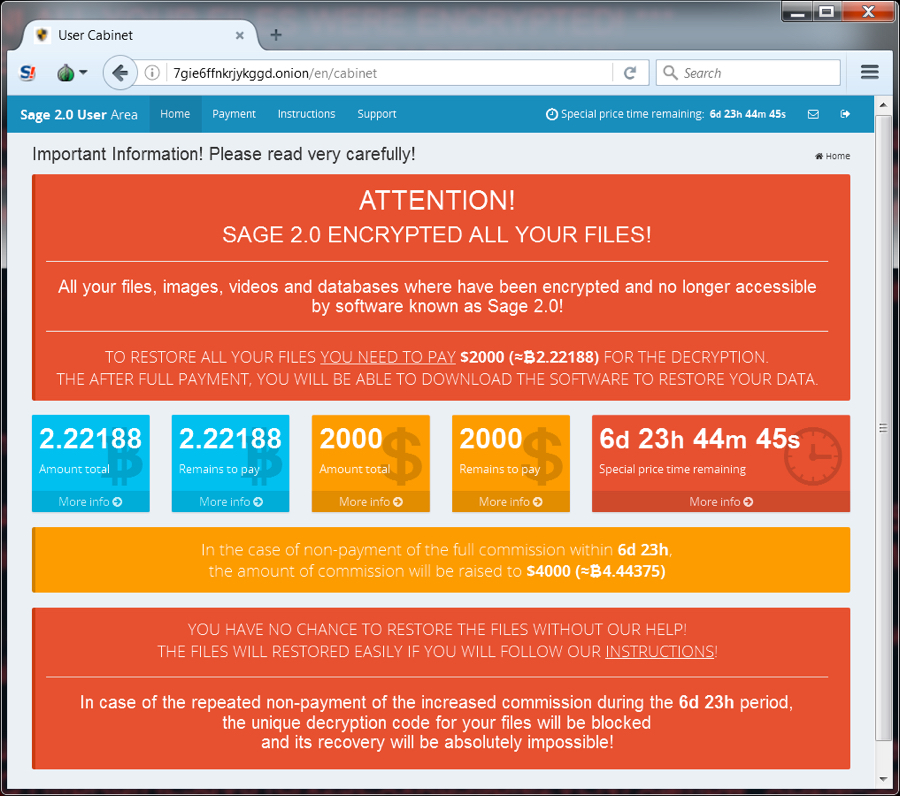 Shown above:  The Sage 2.0 decryptor.

Sage ransomware generates post-infection traffic.  In the image below, an initial HTTP GET request to smoeroota.top was caused by a .js file retrieving the ransomware.  The remaining HTTP POST requests are callback traffic generated by Sage 2.0 from the infected Windows host.

Shown above:  Screenshot of the infection traffic, filtered in Wireshark.

Shown above:  TCP stream of an HTTP request for the post-infection traffic.

When the callback domains for Sage didn't resolve in DNS, the infected host sent UDP packets sent to over 7,000 IP addresses.  I think this could be UDP-based peer-to-peer (P2P) traffic, and it appears to be somehow encoded or encrypted.  BleepingComputer's September 2016 write-up on CryLocker shows the same type of UDP post-infection traffic, but CryLocker's traffic was not encrypted [4]. 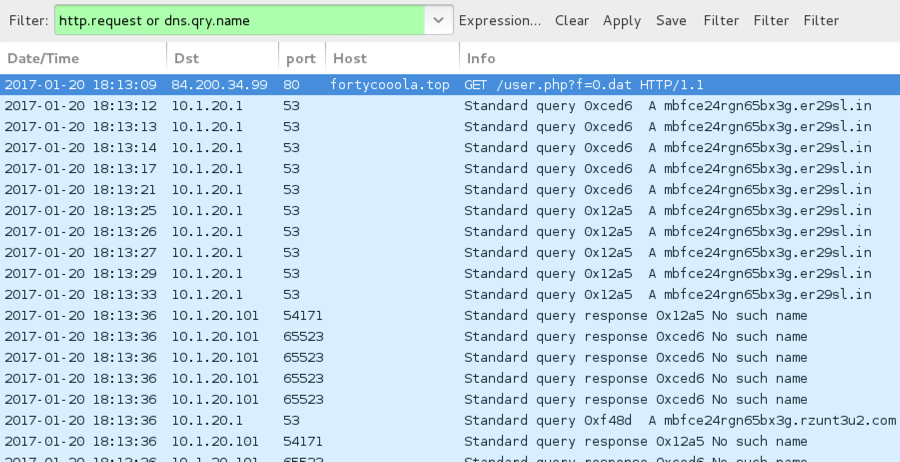 Shown above:  An HTTP request for the Sage 2.0 binary, followed by callback domains not resolving in DNS.

Shown above:  UDP traffic caused by Sage 2.0 when callback domains were unavailable. 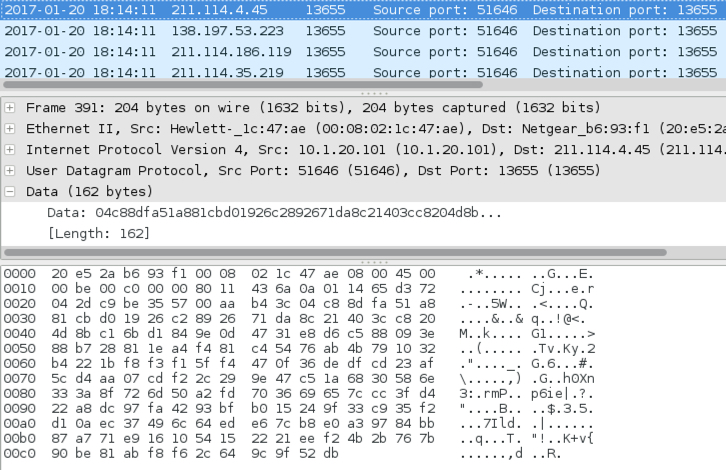 Shown above:  Examining one of the UDP packets.

Examples of locations on the infected Windows host where Sage 2.0 was made persistent:

An important note:  URLs for the ransomware download will send Cerber one day, but the same URLs can send something like Sage ransomware the next.

Still, Sage is another name in the wide variety of existing ransomware families.  This illustrates how profitable ransomware remains for cyber criminals.

Pcaps, emails, malware, and artifacts for this diary are available here.

Thanks for sharing this, all the analysis is really good.

Hi, I am now investigating on this kind of Ransomware and it would be great if you could answer the following question:
How are you able to differentiate the malspam campaigns and how are you able to say that this campaign normally distributes Cerber ransomware?
The thing in this case is indeed an infection with Cerber at the first day, but executing it now, the payload for Sage 2.0 is downloaded and executed.
The confusion in this thing is perfect because two different variants of Ransomware are distributed the same way ...
Cheers

Malspam campaigns are based on the characteristics of the traffic, URLs, emails, attachments, etc. I've been looking into this particular campaign since the beginning of the year.

Ultimately, ransomware is just another form of malware, and it can be distributed the same way any other malware is. This particular malspam campaign has a history of occasionally changing the ransomware sent from the URLs generated by those Word documents or JS file.

Thank you for your reply. It is rather interesting in this case, because I recognized that the victim received on 29. November 2016, 18. January 2017 and 19. January 2017 eMails from the same sender containing the Downloader for Cerber. The first two times there was a Javascript file in it and the last time, when the victim actually opened the file (and got infected) it was a Word document. The problem is that we don't have any data to compare these campaigns. It is just possible investigating of the reports we have. Is there any open database or other resource we could compare and find out if it is the same campaign?

Unfortunately, no I don't know of any databases. For what it's worth, if someone's email is publicly known (posted anywhere on the web), it'll get malspam from any number of campaigns.

This particular campaign that I'm tracking is not targeted, and it spreads a wide net. It's a botnet-based campaign from what I can tell, and it continues to spew massive amounts of malspam out on a daily basis. Once again, it's not targeting people. It's only using publicly-known email addresses that somehow get circulated on spammers' lists.

Sorry I can't be of more help.

Thank you, this is helping me to understand the structure a bit better (I am rather new to this topic). It is hard to learn about it if you just have a few reports and don't look behind the whole thing ;) That is the great thing about such blogs like this one or yours - getting a better overview!

I am currently under attack by this ransomware! So am I understanding that as of today the only option is, to pay the ransom so I can get my files back? I am not a computer specialist but have 5 that are computer specialists (all in different fields). They all seem to have different answers. How do I know who to go with, especially since my computer is on a time limit? $2,000 may not be a lot to some but it is to me, especially if I pay and it still doesn't work after. Anyone have any advice?

Hi, I understand you completely. Try to use the following methods described here. http://www.besttechtips.org/remove-sage-2-0-ransomware-and-decrypt-sage-files/

We got hit by Sage but managed to contain it. Out of three machines that were hit, only one was damaged, as the other two were running anti-ransomware technology with data protection & recovery (temasoft ranstop). Fortunately, the damaged machine shared important folders as mapped drives and those files were also protected by the anti-ransomware technology on the other two machines (actually I had two copies in the backup. But we lost the files on that machine that were not shared.