Just a quick update on the SChannel problem (MS14-066, CVE-2014-6321). So far, there is still no public available exploit for the vulnerability, and details are still sparse. But apparently, there is some progress in developing a working exploit. For example, this tweet by Dave Aitel : 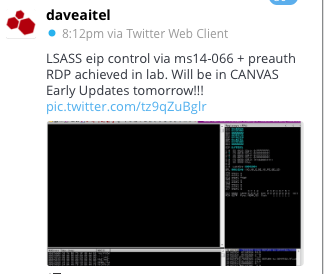 Overall: Keep patching, but I hope your weekend will not be disrupted by a major new exploit being released.

I also got a VERY experimental scanner that may be helpful scanning for unpatched hosts. This scanner does not scan for the vulnerability. Instead, it scans for support for the 4 new ciphers that were added with MS14-066. Maybe someone finds it helpful. Let me know if it works. It is a bash script and uses openssl on Unix. You will need at least openssl version 1.0.1h (and you need to connect directly to the test server, not a proxy).

Some systems we've patched show the new GCM ciphers, however, others don't.

Have a feeling the GCM ciphers only appear for TLSv1.2, which may or may not be enabled, depending on other aspects of the server config.

Also, the MS14-066 advisory mentions adding 4 GCM ciphers, whereas one of your 4 doesn't look to be GCM, so I'm not sure how it fits in.

Unfortunately, it seems the Snort rules from Emerging Threats are not open, only available for Pro subscribers.

User-defined signatures for McAfee NSM will be released here https://kb.mcafee.com/agent/index?page=content&id=KB55447 as soon as they get them written. It's just for NSM and requires you be registered with McAfee support (not free either).
If anybody knows of a free set of signatures, I'd like to get my hands on them.

There appears to be additional progress being made on an exploit. The evidence suggests that Windows 2003 in particular could be exploited:

In one case, the author threatens to anonymously publish the exploit code if Microsoft does not change the exploitability assessment to 0- Exploitation Detected by the end of Friday, 11/14/14.

"Microsoft has until the end of day Friday the 14th to change MS14-066 Exploit-ability Assessment to "0- Exploitation Detected". If they do not, I will anonymously distribute "The Exploit"."

I think it's correct that the new ciphers require TLS 1.2 to be enabled. That seems to be disabled by default on Windows 2012 and Windows 2008 R2, and not supported on any older platforms. Also, I think Windows 2012 R2 already supported these ciphers prior to this hotfix.

There was a respin done on MS14-066 to fix the reported issues. Here is the announcement: