The initial message was a very clumsy piece of spam, that at first looked like an extortion scam or maybe an attempt at phishing

The poor grammar, and the fact that police is unlikely going to email you a warning if you shot someone at a protest, should make it obvious that this is a fake. The address of the "Police Foundation" (which is called the "Atlanta Police Foundation") is correct, even though the addition of "United States" may indicate that this email was not created by someone in the US.

Click on the link will lead (most of the time) to another similar message: 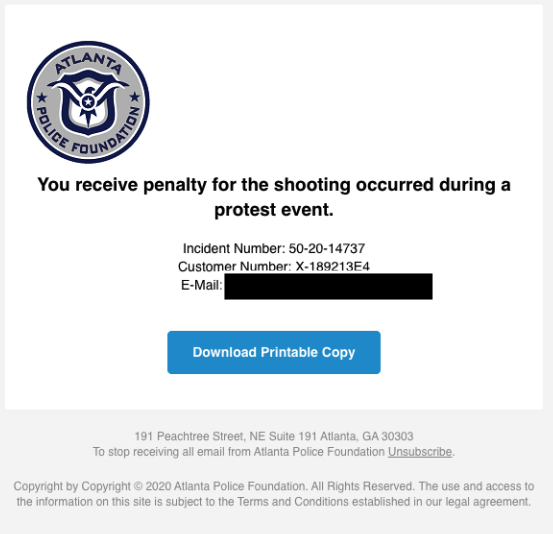 At this point, I expected a good old word document and a macro to get the latest version of some type of ransomware or trojan. No... instead, I got redirected to a donation page. 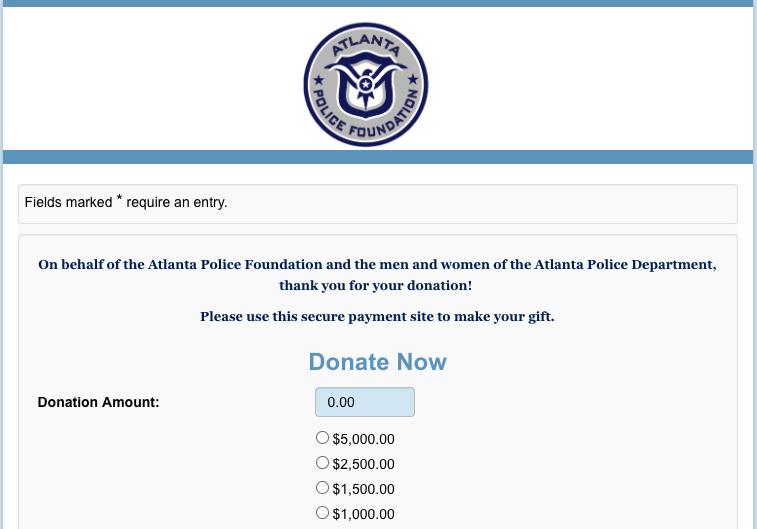 Ok... it must be a fake donation page. They are after money! Wrong again... this page is a legit donation page for the Atlanta Police Foundation.

So why would anybody do this? I very much assume that the initial email was not sent by the Atlanta Police to raise funds to survive the much talked about defunding of police. There are a few theories I have as to what could be happening here:

- Maybe the browser or IP I used was on some kind of blocklist that prevented me from seeing the actual scam. Some attackers have gotten pretty good at blocking researchers. I doubt this is the case here as nothing suggests that this attack is overly sophisticated (but then again: maybe they want you to think they are not sophisticated). I accessed the page from various IPs via VPNs. The page uses some simple obfuscated JavaScript that appears to detect fake user-agents to possibly detect an analyst. But the two URLs it directs to appear to be identical (it is possible that similar tests are performed server-side).

- At different times, I got slightly different behaviors. Sometimes I do not see the intermediate "threat" page, but instead, I am directed to the donation form directly, or to the home page of the Atlanta Police Foundation. So maybe the attack you receive is a bit up to the luck of the draw and some browser fingerprinting. The initial redirect uses lengthy obfuscated JavaScript.

- Or maybe someone is just trying to cause a "Layer 8" (human) denial of service against the Atlanta Police Foundation. With many recipients receiving an obviously fraudulent message leading to a donation form, they may report it as fake (that was my initial gut feeling) and cause the donation form to be shut down. This is currently my "most likely" explanation.

What's your guess as to what is the goal of the attack?

Perhaps the goal is simply to harvest a specific list of people to target with a different attack?

What about left wing hactivist nuisance for their humour and entertainment