New variant of CryptoWall - Is it right to call it 4.0?

Earlier this week, I saw the most recent variant of CryptoWall as a payload delivered by the Angler exploit kit (EK) [1].  Many people, including me, have been calling this new variant "CryptoWall 4.0."  However, version 4.0 is not the most accurate term for this ransomware.  So why are we calling it that?

However, many security sites followed BleepingComputer's lead, calling the malware "CryptoWall 4.0" [4, 5, 6, 7, 8 to name a few].  I even called it 4.0 in my previous ISC diary, back when I saw this new variant appear in Nuclear EK traffic [9].

A few sites haven't called it 4.0, though.  Instead, they have merely noted this is a new variant [10, 11].  However, the vast majority of people have reported the new CryptoWall variant as 4.0.

Even though CryptoWall's authors are not calling it 4.0, the changes in this new variant are quite noticeable.  From a network traffic standpoint, we don't see the malware check an external site for the infected host's IP address.  Other changes are also notable--the notification text has changed, the names of the notification files are different, and the file names of your encrypted files are also encrypted.  This is a significant change in CryptoWall.

So what's the best way to let people know about the new CryptoWall?  How can you get someone's attention?  You can give it a new name, or perhaps a new spin on the same name.  The 4.0 designation may be inaccurate from the malware authors' view; however, it's a good way for us as defenders to identify the new variant.  For example, Bitdefender explained to SecurityWeek.com that it assigned the 4.0 designation to signal a new version of the CryptoWall threat [12].

Below are the major changes in the newest variant of CryptoWall:

The images below illustrate some of the changes.

Shown above:  CryptoWall 3.0 traffic, filtered in Wireshark, with an IP address check to ip-addr.es.

Shown above:  CryptoWall "4.0" traffic, filtered in Wireshark, without the IP address check to ip-addr.es. 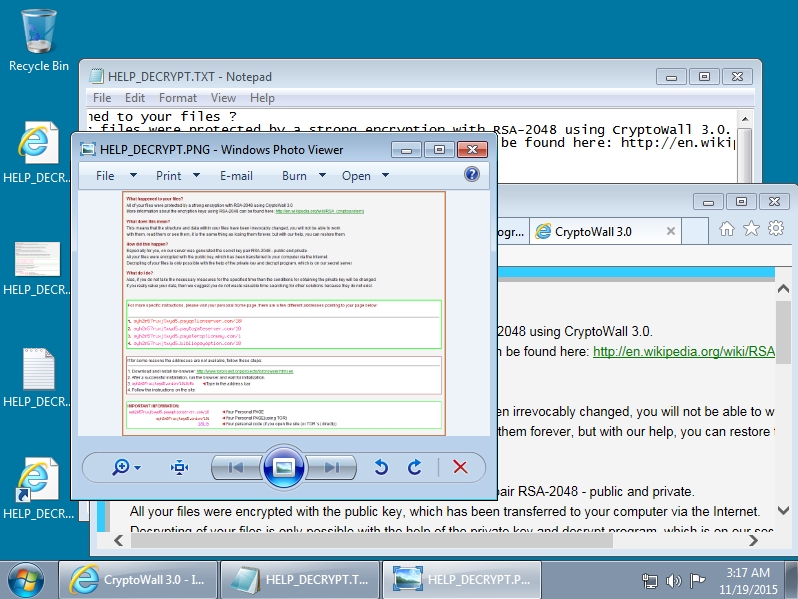 Shown above:  Windows desktop after a CryptoWall 3.0 infection. 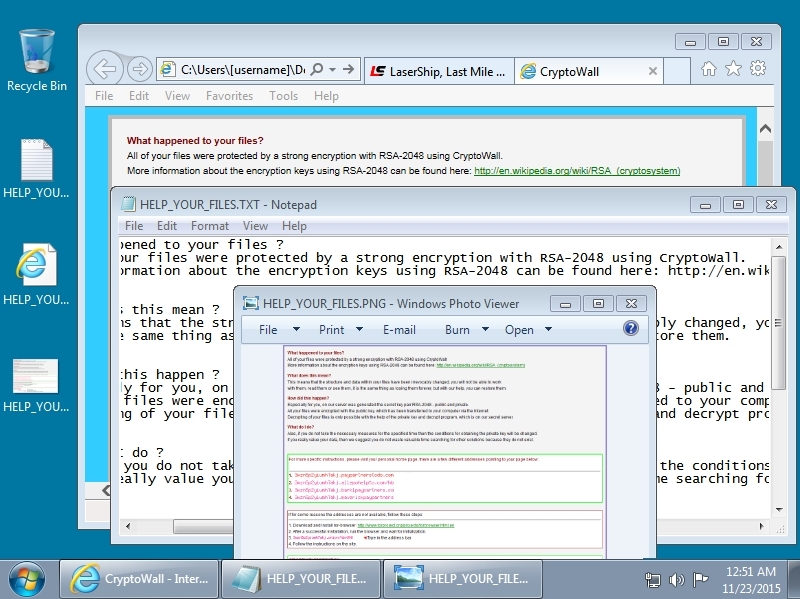 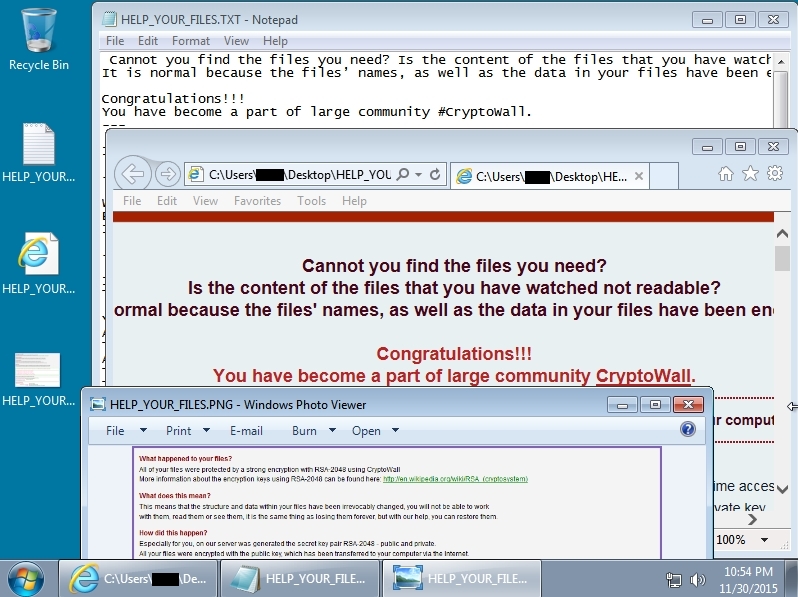 Shown above:  Windows desktop after a CryptoWall "4.0" infection (malware from another actor using Angler EK).

I've discussed this CryptoWall version issue with other security professionals.  Most have told me CryptoWall 4.0 is a good way to refer to this new variant, at least for now.

However, I like to be precise.  Calling this a new CryptoWall variant is okay.  In fact, we should probably forget version numbers when referring to CryptoWall, at least for now.

My most recent sample of this new variant of CryptoWall, delivered by Angler EK, can be found here.

Hi, did you notice that new version of cryptowall seems to avoid\modify\lock Cuckoo Sandbox? Maybe (read probably) I'm wrong but take a look at my last submissions

every answer will be appreciated.

[quote=comment#35775]Hi, did you notice that new version of cryptowall seems to avoid\modify\lock Cuckoo Sandbox? Maybe (read probably) I'm wrong but take a look at my last submissions

every answer will be appreciated.

- http://www.symantec.com/connect/app#!/blogs/tech-support-scams-redirect-nuclear-ek-spread-ransomware
01 Dec 2015 - "... first time we’ve seen tech support scams running in tandem with the Nuclear exploit kit to deliver ransomware and if this proves to be an effective combination, we are likely to see more of this in the future..."