Over the last week, "Blackworm" infected about 300,000 systems based on analysis of logs from the counter web site used by the worm to track itself. This  worm is  different and more serious than other worms for a number of reasons. In particular, it will overwrite a user's files on February 3rd.

At this point, the worm will be detected by up to date anti virus signatures. In order to protect yourself from data loss on February 3rd, you should use current (Jan 23rd or later) anti virus signatures.  Note, however, that the malware attempts to disable/remove any anti-virus software on the system (and does this every hour while the system is up), so if the machine was infected before signatures were deployed, obviously, that anti-virus software can't be expected to clean up the infection for you.

We will try to post more detailed cleanup instructions later. However, it is likely that you will have to rebuild the system from scratch. Obtaining good backups is critical as a first step.

The first thing you should do is to update your anti virus signatures.

This page will be updated as new information becomes available. Please see the end of the page for references to other sites. Use only this url to link to this page: http://isc.sans.org/blackworm

As usual, this worm/virus has collected a number of names from various vendors. It is so far known as: Blackmal, Nyxem, MyWife, Tearec among other names. Update: we have been informed that the CME number will be 'CME-24'. cme.mitre.org should shortly list this number.


How would I get infected?

The worm spreads via e-mail attachments or file shares. Once a system in your network is infected, it will try to infect all shared file systems it has access to. You may see a new "zip file" icon on your desktop.


What will BlackWorm do to my system?

It will disable most anti virus products and delete them. The worm will e-mail itself using a variety of extensions and file names. It will add itself to the list of auto-start programs in your registry.

Joe Stewart (Lurhq.com) provided the following snort signatures based on his analysis of the worm:
(for up to date rules, see bleedingsnort.org.

The worm did hit a counter on the web as noted above. We took those logs, removed the attempted DoS attack from it and plotted both total hits per hour (blue line) and the first hit from each IP address per hour as well (red line). It's interesting to note the spread had slowed before the DoS attack on the counter had started. 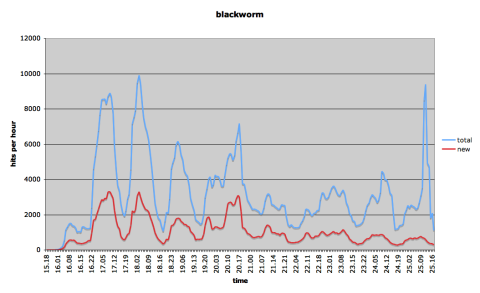 the format of the x axis is date.hour

We would like to thank the members of the TISF BlackWorm task force for analysis and coordination.

The task force emerged from the MWP/DA groups.  This task force is now known as the TISF BlackWorm task force. It involves many in the security (anti spam, CERTs, anti virus, academia, ISP's, etc.) community and industry, working together to combat threats to the security of the Internet in cooperation with law enforcement globally.

Note: some of these links will offer removal tools. We have not tested any of these tools thoroughly enough to recommend them. They should be used as a "first try" tool, but do not substitute for a full analysis and possible rebuild of the infected system. BlackWorm includes the ability to install additional components. These additional components, if installed, will likely be missed. In addition, a virus like BlackWorm is likely an indication of a more fundamental problem in your security posture and multiple infections are likely.

Q. What is CME-24?
A. A mass emailing worm with a destructive payload.
Please see http://cme.mitre.org/data/list.html#24 for pointers to antivirus vendor descriptions and analyses relating to this malware.

Q. I hear about new viruses all the time--what makes this one a "big deal?"
A. This destructive virus will delete files from a number of popular programs on February 3rd, and on the 3rd day of the month thereafter.
Files which may be deleted by the malware include files ending with the extension of DOC, XLS, MDE, MDB, PPT, PPS, RAR, PDF, PSD, DMP, ZIP
Another factor that potentially makes this virus particularly noteworthy is that it has seen broad distribution, with the estimated infected machines in the hundreds of thousands. http://www.lurhq.com/blackworm-stats.html
Another factor that potentially makes this virus noteworthy is it's self defense mechanism. It closes windows if the caption has any of the following strings in it. SYMANTEC, SCAN, KASPERSKY, VIRUS, MCAFEE, TREND MICRO, NORTON, REMOVAL, or FIX. So many antivirus programs, scanners etc... can not be updated or used on a system that is infected with cme-24.

Q. You refer to this virus/worm as CME-24 -- that's not what *my* antivirus vendor calls it. What other names does CME-24 use?

Q. What is CME?
A. http://cme.mitre.org/ CME provides single, common identifiers to new virus threats to reduce public confusions during malware outbreaks. CME is not an attempt to solve the challenges involved with naming schemes for viruses and other forms of malware, but instead aims to facilitate the adoption of a shared, neutral indexing capability for malware.

Q. How do people get infected with CME-24?
A. Known methods for infection include infected email attachments and network shares, however other mechanisms are also possible. While some areas of the world appear to be more prone toward infection than others, it appears that infected systems may be found in virtually all countries.

Q. What should I do to protect myself from getting infected with CME-24?
A. There is a number of things you can do:

Q. Help, I think I have been infected with CME-24. What should I do now?
A. If you have anti-virus software installed verify that it is up to date. Check with your anti-virus vendor if you are unsure of how to do this. If you had anti-virus software that you believe was disabled by CME-24 you may have to uninstall it before re-installing it.If you do not have anti-virus software installed there are several anti-virus products that offer free or trial tools.  Av-test.org maintains a list of antivirus products. here
and West Coast labs at http://www.westcoastlabs.org/cm-av-list.asp?Cat_ID=2 and ICSA https://www.icsalabs.com/icsa/product.php?tid=dfgdf$gdhkkjk-kkkk
Some of these vendors offer free online scans as well. Be aware online scanners usually require activex or java be enabled, may take a long time and probably require admin privileges. Online scanners also do not provide any long term protection against reinfection.If you've already been infected, you should seek professional help to deal with that infection at once. Failure to deal with this malware prior to the 3rd day of the month can result in data loss.

Q. Some very important file was trashed by the worm. I really need to get the information that was in that file. I don't have a clean backup. What can I do? Can I get back at least part of that file?
A. Possibly, some file recovery tools might recover all or part of the missing data. A data recovery service may be your be able to assist.

Q. Why would someone do something so tremendously stupid and destructive?
A. Unless the author comes out and tells us we may never know why.

Q. I run Windows Media Center Edition, Mac OS X, Linux, have a Treo, etc. Is my system at risk? Or is this just a Windows XP thing?
A. This virus only affects Windows operating systems. It affects nearly every version of windows.
From: http://www.microsoft.com/security/encyclopedia/details.aspx?Name=Win32/Mywife.E@mm&view=en-us
Windows NT 3.x/4.0, 95, 2000, XP, Server 2003, ME and 98 are all potentially affected.

Q. I'm a mail server administrator. How can I protect my customers from CME-24 and other malware?
A. There are several things you may want to do:You may want to run a server-side antivirus program, or software to strip or defang potentially dangerous attachments. Under Unix, ClamAV is one example of a free antivirus program that you can run on your mail server; Procmail Email Sanitizer http://www.impsec.org/email-tools/procmail-security.html is an example of a program that you can run to remove or defang potentially hostile attachments. Under Windows there are several email scanning antivirus programs available.
You should also endeavor to accept, process and resolve notifications you may receive about infected customers. Confirm that you have a working abuse@ address, a working postmaster@ address, and current whois contact information for your domain(s). See http://www.faqs.org/rfcs/rfc2142.html for clarification.If you have netblock(s) that have been assigned to you via SWIP or whois, or an autonomous system number (ASN), please make sure that you have current abuse reporting contact information defined in whois for those resources as well.If you operate an intrusion detection system, consider running the Bleeding Snort rules that may help you to identify potentially infected customers. http://www.bleedingsnort.com/cgi-bin/viewcvs.cgi/sigs/VIRUS/WORM_Nyxem#rev1.6Educate your customers about security effective practices. Site license an antivirus product and distribute it to your customers.Encourage customers to routinely apply patches.Encourage customers to use a software and/or hardware firewall. Encourage customers to routinely backup their systems. Where terms of service and applicable law permits, scan customer systems for vulnerabilities and insure that customers get fixed or removed from the network.

This document was prepared by the TISF BlackWorm task force which includes many elements in the security communities including: anti spam groups, CERTs, anti-virus teams, academia, law enforcement, and ISP's. The TISF BlackWorm task force would like to thank all the contributors to this FAQ including: Members of the DA/MWP groups and The Internet Storm Center handlers.

Original can be found at: http://isc.sans.org/blackworm