BazarLoader phishing lures: plan a Halloween party, get a bonus and be fired in the same afternoon

Phishing messages distributing BazarLoader have come to be commonplace in the past six months, but in the last couple of weeks I’ve been seeing more and more e-mails spreading this malware caught in my quarantine. Although contents of these messages differ, their appearance is usually similar – they all contain a fairly long link to Google Docs along with a text part instructing the recipient to visit the included URL. The lures can range quite widely and the uncoordinated way, in which the messages are distributed, can result in a single recipient receiving fairly amusing combinations of messages. Given the current global not-so-optimistic situation, I thought I’d try to share something a little bit “lighter” today and take a look at some of these messages, but before we get to that, let’s take a short look at the URLs distributed in the e-mails.

Should a recipient click on the Google Docs link, they would be directed to a web page containing a fake preview of a document corresponding to the lure mentioned in the e-mail. The page would also contain download links, from which a victim might seemingly download the promised document. The downloaded file would however insted be a BazarLoader binary. 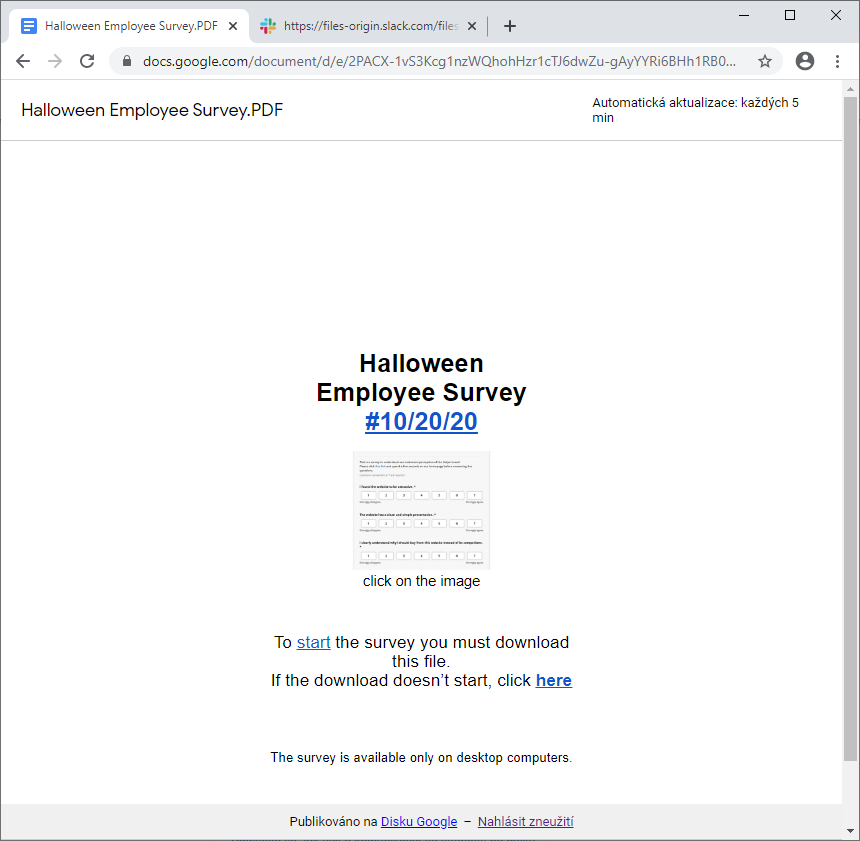 It is worth mentioning that in the latest campaign I’ve seen (the case of “Halloween survey” shown above), the threat actors appeared to use a Slack to host the final payload using the following URL.

The link was no longer working when I tried it, but from what I’ve read about Bazar, use of Slack would seem to be a new way of distributing its malicious executables. But back to the phishing e-mails themselves...

As we’ve mentioned, the messages are visually very similar, but the lures differ significantly. And since distribution of these e-mails seems to be completely uncoordinated, reading through those, which one might receive in single a week or two, might make one wonder whether the threat actors aren’t subtly trying to make us embrace the old U.S. Army motto of “Be All You Can Be”.

The reason at least I get this feeling is, that going only by the messages addressed to me personally in the last few weeks:

Reading through all of these e-mails (and many more), one can’t help but wonder whether sending out similarly looking messages to the same addresses over and over again is really effective for the attackers... Unless their aim is to make the more impressionable recipients feel a bit unsure about the dependability of their memory when it comes to their interactions with customers.

Although I don’t mean to make light of phishing, as it is an undeniable threat, it is good to sometimes take a look at it’s more amusing side. My experience is that this is especially true when it comes to security awareness courses as humor tends to make any examples "stick" a bit more. And since October is a Cybersecurity Awareness Month[1,2], if you haven’t yet shared any tips about how to stay a bit safer online with your less technically-oriented colleagues, maybe showing them the contradictory tone of some of the phishing lures above might not be a bad start...

As bad as they seem, they don't need a high success rate. Once upon a time, on a very bad day, there were more clickers than I ever want to remember on a badly worded "Invoi see attach" email. Nothing like an .scr file labeled as .zip with an aggressive address harvester propagating across your intranet.

You are, of course, right - all it takes is one person who clicks on a link in a low-quality phishing and a whole network might be compromised as a result. In this case, however, I would say the messages themselves are not - each one on their own - particularly "bad" or "low quality", but the repeated use of visually nearly identical templates would certainly make it much less probable that someone would click on the links - if someone has spotted the first phishing, they will be less likely to trust the second one, much less the fifth or tenth...