In his “Rocket Kitten” diary entry, Johannes introduces research by Gadi Evron and Tillmann Werner. They analyzed a PE-file embedded in the VBA macro code of an XLSM spreadsheet.

I want to show you how you can quickly analyze MS Offices documents and extract files. Just using my Python oledump tool, nothing else. You don’t need MS Office for this analysis.

The first line (A: ) indicates that oledump found an OLE file named xl/vbaProject.bin inside the XLSM file. Remember that the new MS Office file format (.docx, .xlsm, …) is a set of XML files stored inside a ZIP file. But VBA macros are not stored in XML files, they still use the older MS Office file format: OLE files.

If oledump finds streams with VBA macros, I always look first at the streams marked with an uppercase letter M, as these contain the most promising code.

Let’s take a look at the VBA code in stream A3 like this:

Option –s A3 selects stream A3 for analysis, and option –v decompresses the VBA source code.

Here is a part of the VBA source code. Remark function A0: it concatenates characters generated with function Chr into a long string. If you’re very familiar with the ASCII table, you know that Chr(77) + Chr(90) evaluates to string MZ. So this is very likely a PE file.

Looking at the bottom of the source code, we get a better idea: 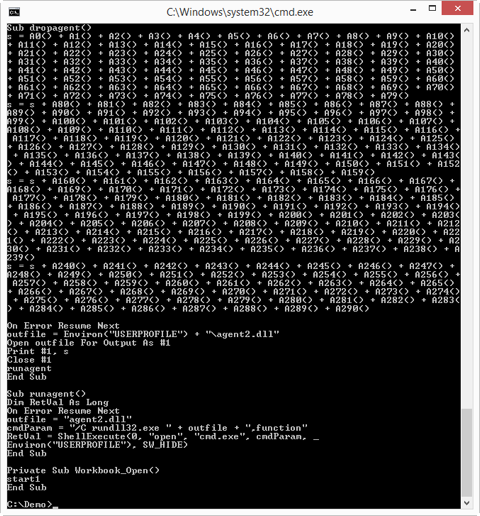 With this it becomes clear that a very long series of Chr functions is concatenated into a long string s, and that this string s is written to a file with name agent2.dll, and then executed via rundll32.

So in a nutshell: this VBA macro contains a DLL file, encoded in Chr functions, which is written to disk and then executed automatically when the spreadsheet is opened.

What we would like to do now is extract the embedded DLL file without having to execute the VBA macro. This can be done with a special decoder. oledump supports decoders written in Python. Decoders transform the content of a stream into another form. We are going to use the Chr decoder: decoder_chr. This decoder finds all Chr functions in VBA source code, takes the numerical argument, converts it to a byte and concatenates all bytes.

Here is how this works: 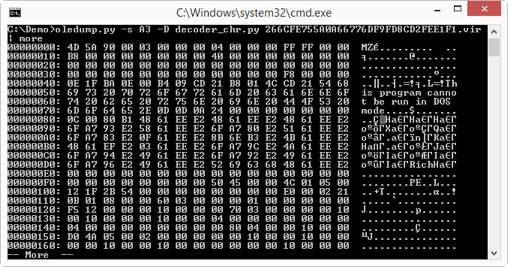 Last, we dump (option –d) the embedded PE file and pipe it through pecheck (a tool to analyze PE files): 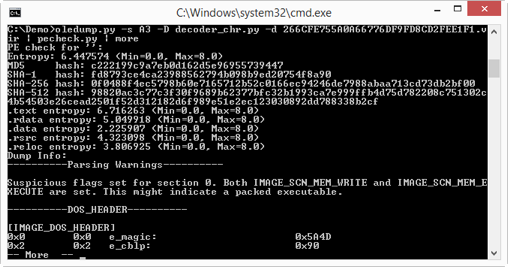 Oledump can be found on my blog.

Keywords:
0 comment(s)
Join us at SANS! Attend with Rick Wanner in starting