I often wondered what an 'average' reaction would be to a fire alarm sounding in a hotel. My question was answered a couple of weeks ago in misty San Franscico, CA. It was checking into SANSFire 2013 here in muggy Washington, DC that made me think to post this. Before I tell the story it would be good to give out the simple template I follow every time I check into a hotel.

1) Plan and Walk my Exit Route

2) Locate Nearest Fire Extinguisher (if one is installed, not so often anymore)

These are simple things that if walked through once should aid a late night wake up call from a fire alarm when that collides with drowsiness.

At 1222AM an alarm sounded at my hotel in San Francisco and I executed basic plan for egress. I was stunned at how few people were leaving hotel rooms. Some had heads peaked out of rooms looking to see if perhaps others were leaving or if they maybe "had" to leave?

When I got down stairs (Yes stairs, I did see one person staring at the elevator) this is what I was met with: 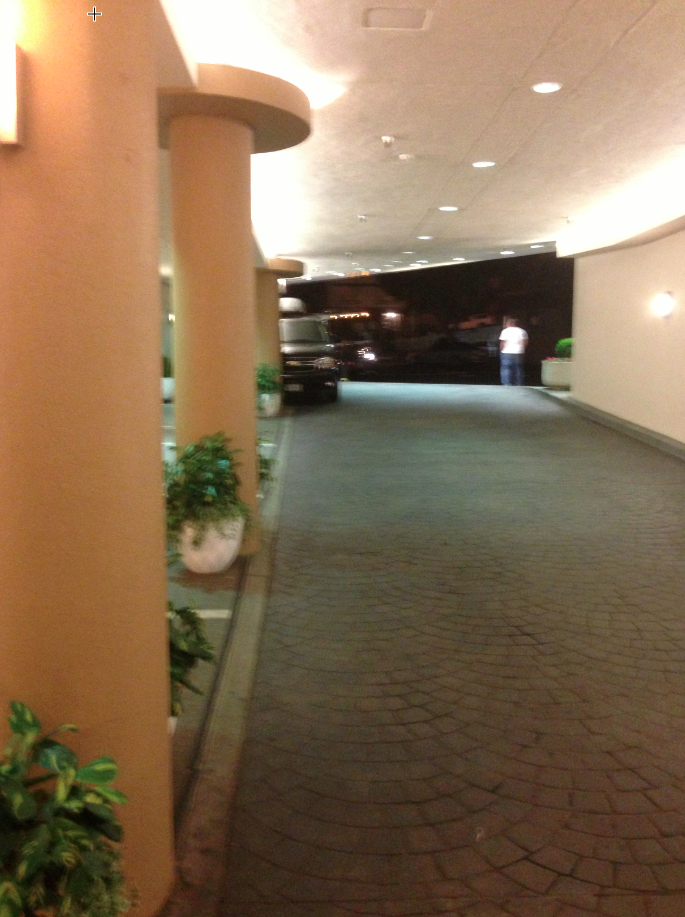 After about 45 minutes and hotel staff walking the floors and then instructing everyone to wait in the lobby, this was the result: 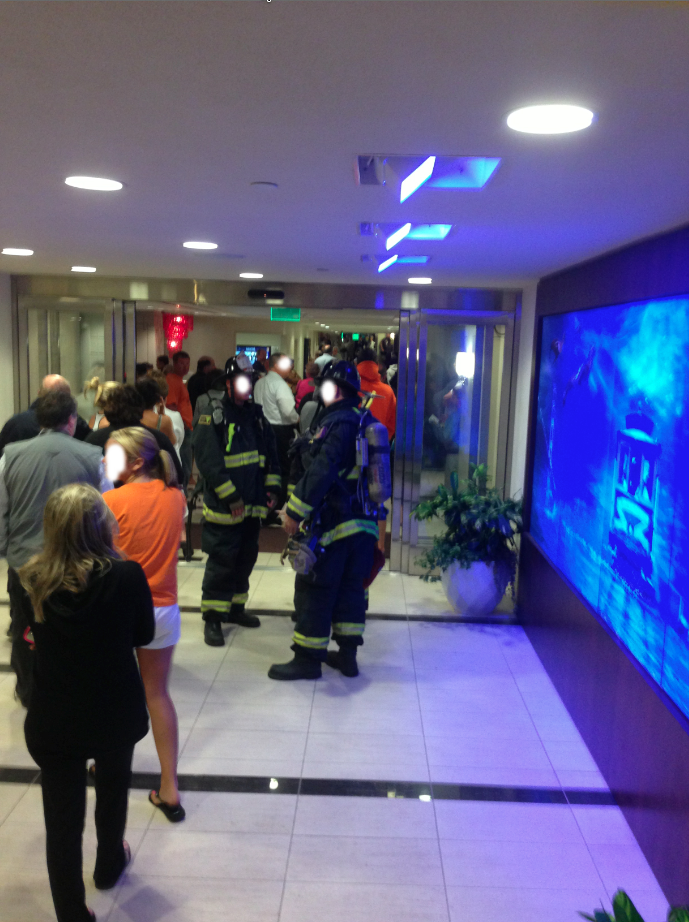 So the moral of this story is have a plan. Even though this was most obviouly a false alarm, I always treat them as if they are real.

Signing off from DC SANSFIRE 2013!

Great pre-planning steps. One thing I add to those, is I have appropriate clothing staged and ready to be put on in under 30 seconds. Going from a 70 degree room to a 40 degree night outside, this becomes a "must have". Also, car keys are a great thing to have, if you have to be outside for a prolonged period of time.

Another tip I use is to put a damp towel at the entry door. This helps to keep any smoke from coming into the room in a real fire and will generally buy you a little bit of time.

Tip number two. If you really are that concerned about it, never book a room above the 10th floor. That is about the highest a fire truck ladder can get to. Otherwise if the exits are blocked, you will have to shelter in place.

It exactly reflects my own experience.
On our second last US vacation, in a hotel somewhere in Arizona.
Around 3.00AM the fire alarm knocks me out of deepest dreams.
I wake up my wife, we jump into our cloths, grab our most important stuff (Passport, wallet, flight tickets) and run the **** down the floor were the next fire exit stairs are.

On our way down there were several heads that pop-up in the doors, take a short look on what is going on and... get back to bed.


After 15 minutes at the emergency meeting point I guess not even half of the people left the hotel.

@RyanH I was going to comment that I always sleep in Pajamas but thought that might have been TMI. You do bring up a great point and for the sake of preparedness, have clothing near by as well! As for Car Keys, I usually don't have a rental when traveling but also great point.

@snuffer Great comment on the lower than 10th floor and I agree totally.

Great advice. To add a tech bit to this, make sure your data rooms can hear a fire alarm. I've been in two situations where I was working at clients. In one, I turned around to see a fireman in full regalia with an axe staring at me in the server room. In another case, I found out 40 minutes after the alarm when I went to the bathroom. In that case, the building was on fire and I got a lung-full of toxic smoke on the way out. In neither case had anyone thought to put an alarm one could hear in the server rooms.

I guess the folks just popping their heads out of the doors are future Darwin Award winners; or they've just been desensitized by too many false alarms.

Because they shouldn't "look at what other people are doing"; they should be running their evacuation plan, or the evacuation paths printed on the map in their room. When alarm in a large building goes off: you have no way of knowing, if the alarm was due to a bomb threat, or imminent hazard, and you might have 10 minutes to save yourself: if there is a fire a floor above or below you, if your exit path may be cut off in 5 minutes.

You cannot count on a quick emergency response in such a situation, if you ignore the evac plans. A hotel is a pretty big place: plenty of places for a serious danger to be out of view, but still likely to be life-threatening...


Although I always wonder, if opportunistic thieves are sometimes intentionally setting off alarms, for a chance to burgle vacant rooms, or mug people on the way out who just woke at 3am; security concerns there?

I suppose, statistically, your stuff might be safer in your room in some cases, although you might lose access to it for a long time, since most alarms are false: many/most fires will be suppressed quickly by sprinklers and firefighters, and your laptop/bags cannot inhale smoke.

Hotel building owners and insurance companies want to protect their investment too, and try to keep their guests happy.... Perhaps you should always pack all your electronics in a waterproof bag though :)

The book "Influence" by Robert Cialdini describes very well the situation of those poking their nose out the door - they are looking for social proof of an emergency. All they see is other people poking their nose out the door looking for the same thing, leading to the phenomenon of 'pluralistic ignorance'.... which has historically lead to fatal consequences in real emergencies.

In a real fire seconds make a difference, so it pays to treat every alarm as real until proven otherwise.

Whenever I've had the fortune/misfortune to stay in large hotels, after settling into my room, I ALWAYS find the stairs/exit and walk down to exit/reception. For every meal time, I habitually walk down, it is then ingrained in my brain if I get woken from deep sleep (when everyone is at their most vulnerable) and my eyes, ears and mind aren't yet talking to each other in sync (firewall problem?) my brain just walks my body out...!

Good tips for valuables/tech - keep it light and easy to grab on the way - or review what you really need to take when travelling especially what you might lose and what you cannot afford to lose.
Perhaps leave as much as you can at home/base.
I try to keep important data etc seperate in case of theft or at least a backup on a stick or something small.

You do have to watch out with the whole 'walk your route in advance' idea. I have been in many buildings where the access to fire escape stairwells or corridors are behind doors that are either:
- locked until the alarm sounds, or
- opening them sets off the alarm.

Heck, I've even been in a few high security buildings where an alarm activation *does not* unlock the fire escape doors until a predetermined time has passed with no security personnel interaction (anything in an airport complex is an excellent example of this).

As techies we are more likely to be in 'odd' areas of buildings we do not know well, away from other people, so knowing how the fire alarm system works in the building can be equally important as knowing the exit routes.

But with all the preparation in the world, sometimes you just have to look for the nearest fire exit sign, follow it and hope for the best.

On the topic of clothing be nearby in case of real emergency.......I always pack some 100% cotton clothing in case of a fire. This goes for air travel days as well as middle of the night fires in hotels!!

I keep my keys, wallet, and knife in the jeans and laptop bag, phone, etc all right by the bed in case I have to run.