I gave a few tips over the last weeks to help friends with processing files. Turned out that each time, UNICODE was involved.

Xavier had an issue with a malicious UDF file. I took a look with a binary editor:

The first bytes, FF FE, reminded me of a BOM: a Byte Order Mark. FF FE or FE FF can be found at the start of UTF-16 text files. It indicates the endianness: little endian (screenshot) or big endian.

The fact that it contains just null bytes is unusual, but then again, this is actually not a text file, but an UDF file that was probably opened and saved with a text editor.

Another friend had a problem having a an XML file parsed by a SIEM. It threw an unusual, obscure error. It turned out here too, that the file was UNICODE, while the SIEM expected an ASCII file.

When opening text files with an editor, it's often not trivial to determine the encoding of the file. And not everyone is comfortable using an hexadecimal error.

If you want a command-line tool, I recommend the file command.

For a GUI tool on Windows, you can use the free text editor Notepad++.

It displays the encoding of the displayed file in its status bar:

LE BOM tells us that the file contains a BOM and is little endian. UCS-2 (an ISO standard equivalent with UNICODE and the basis for UTF-16). And we get bonus information: the line separator is carriage return / linefeed (CR LF). This was something Xavier had to deal with too.

This editor can of course convert encodings: 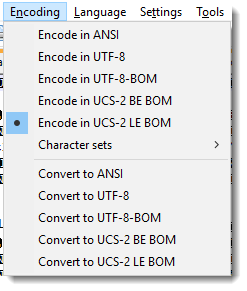 thanks Didier, I've had this problem too, and this helps.
minor typo
"And not everyone is comfortable using an hexadecimal <editor>"
Ain't auto-complete great?
John

As an alternative to Notepad++ and dedicated hex editors: I usually use the built-in "Lister" in Total Commander (I can't compute without it; it's shareware - and I have a license) to quickly view files in hex, without the risk of accidental modifications.

Christian Ghisler, the author of Total Commander, provides a separate freeware program called "lister.exe" that also does the job, although it was updated last in 2007 and is not available in a 64-bit version. But, as said, this program is freeware.

Download: https://www.ghisler.com/lister/
The file lister.exe is authenticode-signed albeit using an MD5 hash. Therefore I provide the SHA256 hashes of the files (the exe has been on my PC for many years):

To double-check you can search VirusTotal for said hashes.