Last 24 hours have been extremely interesting – this month’s patch Tuesday by Microsoft brought to us 2 very interesting (and critical) vulnerabilities. The first one, the “BlueKeep” like remote code execution vulnerability in Remote Desktop Gateway (CVE-2020-0609, CVE-2020-0610) has been kind of ignored, although it’s really critical … so I guess I’ll continue doing that in this diary (but rest assured that we are keeping an eye on the RDG vulnerability as well).

This diary is about the vulnerability in Windows CryptoAPI, CVE-2020-0601, that everyone has been talking about; we decided to sum up known and tested information so far.

The vulnerability exists in the Windows CryptoAPI component (Crypt32.dll), specifically in the part that is used to validate Elliptic Curve Cryptography (ECC) certificates. Due to a serious bug in code, ECC certificates are not properly verified – there have been several posts about why this fails (i.e. the one here), but the bottom line is that it is trivial to use an existing Certificate Authority (that must be using ECC) to create a spoofed certificate. It took only hours for first proof of concept certificates to be released, and we can confirm now that it is trivial to create such certificates. So, what can an attacker do with this?

While certificates are used for all sorts of things, the two most common ways of abusing the vulnerability are probably through spoofing web certificates and digital signatures for binaries on Windows. Let’s address those.

In order to spoof a certificate, an attacker will typically want to pick an ECC CA that comes bundled with Windows. There are several such certificates, and in examples below I used Microsoft ECC Product Root Certificate Authority 2018 which comes installed by default (and for bonus, it’s a Microsoft’s CA).

Due to vulnerability being in the way ECC certificates are verified, in the process of creating the spoofed certificate, the attacker takes the public key from the CA and creates a fake CA, where the public key will be the same, but it will use different generator (G) for the curve. Normally, this should be rejected due to the generator not being the original one, but Crypto32.dll fails to do that and, as long as the public key matches the original CA will accept the certificate.

We have generated several such certificates and put a test site that you can use to see if you are vulnerable. The test site is available at https://curveballtest.com/index.html - once you open it, there is a special style sheet loaded from a site using such a fake certificate. If it renders, you will see a message saying that you are vulnerable, as below: 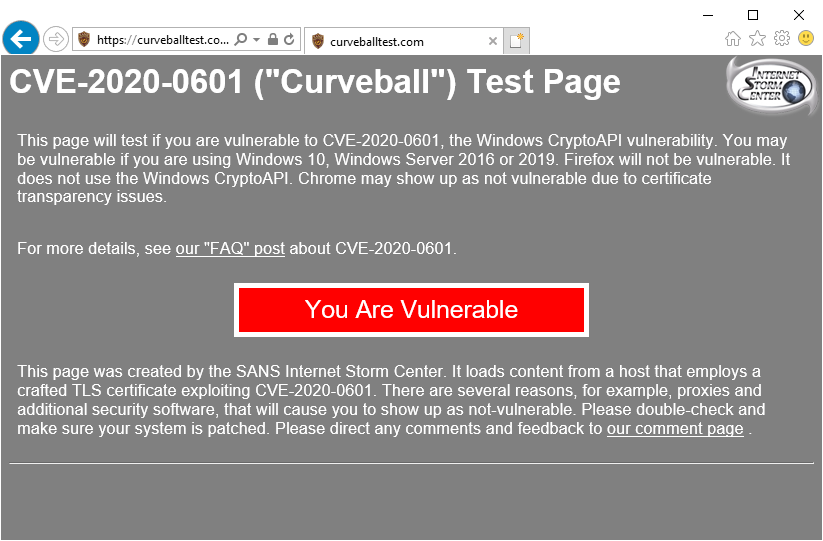 Now, this will by default work only in Internet Explorer and Edge on Windows. Mozilla Firefox does not use Crypt32.dll to verify certificates and does not have the same bug.

Google Chrome does use Crypt32.dll, however it tries to verify every certificate in Certificate Transparency log, which is another safety feature in Chrome. That being said, Google introduced that feature for all certificates issued after May 1, 2018.
Hmmm .. and we're faking certificates, aren't we? So, how about we issue a certificate before that date, let's say 24.3.2018. And voila - it works in Google Chrome out of box as well!
The maximum validity for a certificate that Chrome allows is about 27 months - enough for us
Google was fast addressing this - with the latest release of Chrome, released today (Thursday, 16/1/2020) they added additional checks for Chrome so make sure you update Chrome as well!

Finally, the vulnerability exists only on Windows 10 and Windows Server 2016 and 2019 – other Windows OSes do not support ECC certificates so they are safe.

Once you visit such a site with a vulnerable OS (and IE or Edge), the certificate will be correctly validated, although certificate details in IE will be weird, as you can see below: 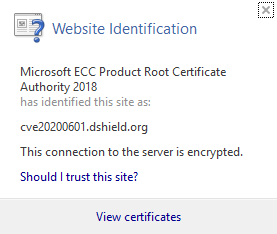 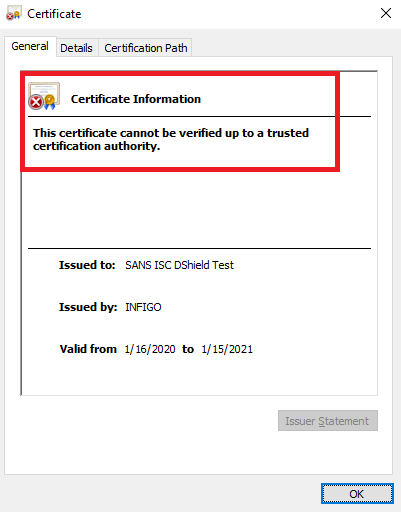 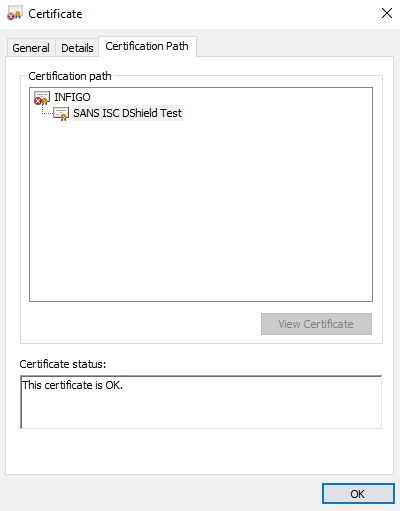 Edge is actually even worse – there isn’t a single sign of a certificate being spoofed: 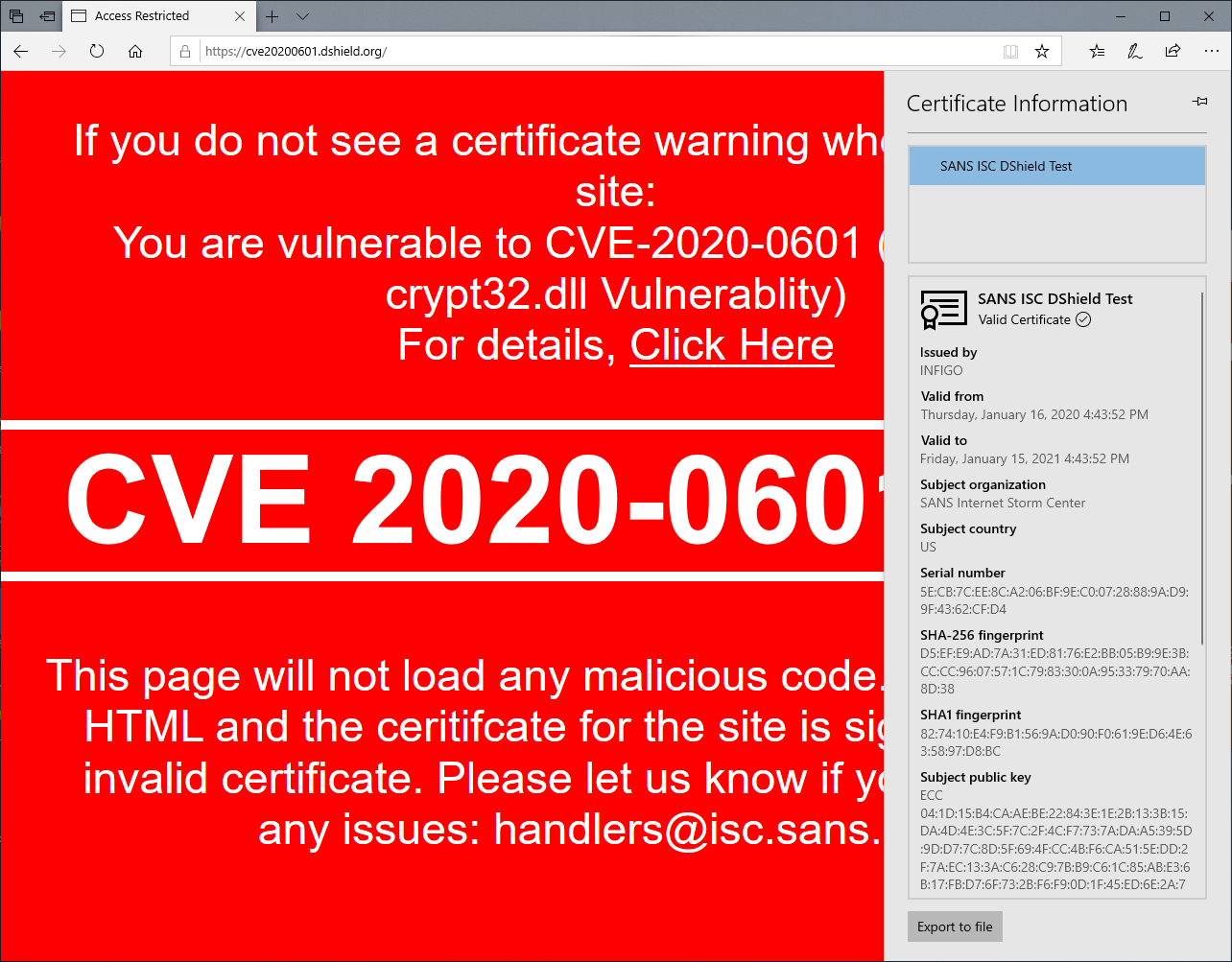 I would say that this decreases a risk a bit – sure, an attacker can use social engineering or phishing techniques, but in such an attack the final domain will be fake anyway (i.e. isc.sans.edu.malicious.com).

Besides web sites, binaries are nowadays commonly signed. Actually, a lot of endpoint security software will skip verifying correctly signed binaries and will blindly trust them. This is what makes this vulnerability more critical: if it’s possible for an attacker to spoof a certificate for a binary pretending to be Microsoft for example, then it might be possible to evade certain defenses.

We have successfully created such binaries and tested on both pre and post-patch machines and the results here were a bit more worrying.

On a non-patched machine, the digital signature shows as perfectly fine, as you can see in figures below: 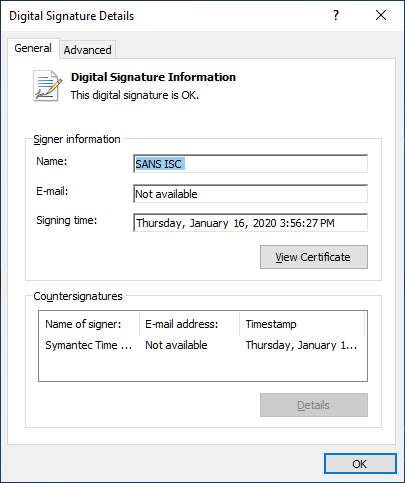 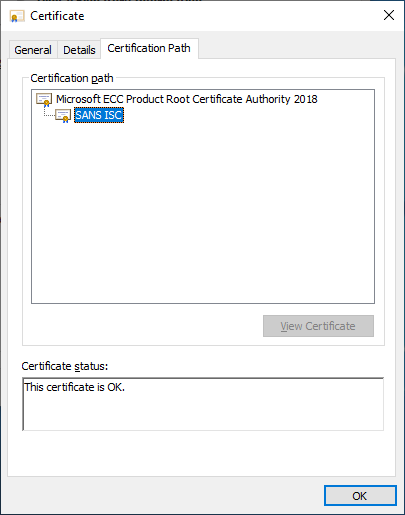 Of course, it will run without any issues, as expected.
With the patch, besides fixing certificate validation, Microsoft also added a new event to Windows Event Log, that will warn when a binary with a fake certificate is executed. This is what the signature and the event log looks like on a patched machine: 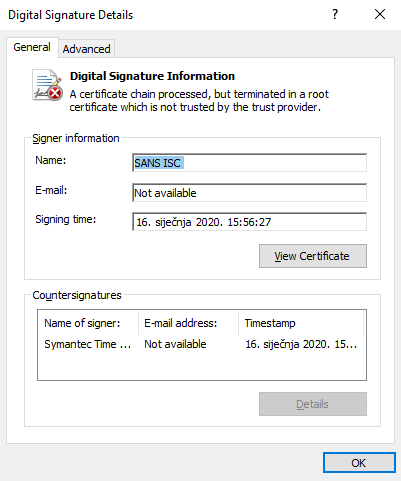 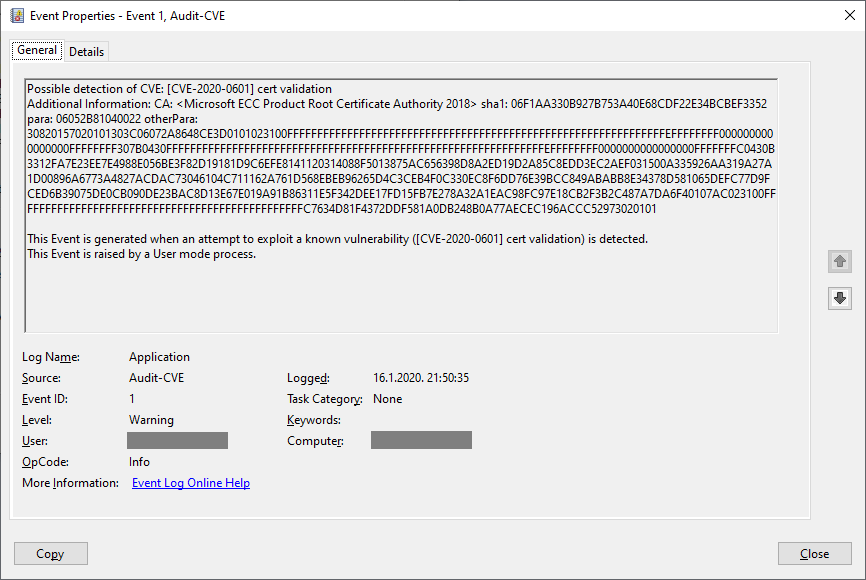 However, the bad binary will still be executed on a patched machine, silently, without any warning except the event log above. This is a serious issue since the patch will not prevent such a maliciously signed binary from working, it will just create a log. Endpoint protection software should, hopefully, in this case correctly detect and block such an attempt.

Finally, if you just want to test for detection and create a fake Event Log as the one above, our handler Didier Stevens created a simple VBA program that will generate such an event.
The code is available on his blog, at https://blog.didierstevens.com/2020/01/15/using-cveeventwrite-from-vba-cve-2020-0601/

I liked the idea so I recreated it in Powershell (hey, it's Posh), you can find equivalent PSH code below:

If you want to test with a real binary, Didier created a simple program that does nothing really except showing a window which we then signed with a fake certificate.
You can download it from here: https://curveballtest.com/SANSISC_signed.exe - once you start it, there should be an event created in Windows Event log (Application). Additionally, on a patched machine, when you start it as administrator, you should see a message about an incorrect signature.

To sum it up: it’s not the end of the world, but the vulnerability is serious: you should patch affected systems as soon as possible. Keep in mind that any other software that uses Crypt32.dll to verify ECC certificates is vulnerable, so it’s best that patching is not delayed.

We will be updating the diary as we get more information – of course, if you have something to share with us, let us know!

Just a small update regarding digital signatures for binaries. First, the binary we put last night was not signed - we have put a signed one up now (with a fake signature), it is available at the following URL: https://curveballtest.com/SANSISC_signed_fake.exe

Additionally, the fact that Windows will not prevent the binary from being executed is correct (thanks Stefan for the comment). The only sign of something going wrong will be when elevated, when the UAC prompt is shown.

On a vulnerable system, the following prompt is shown: 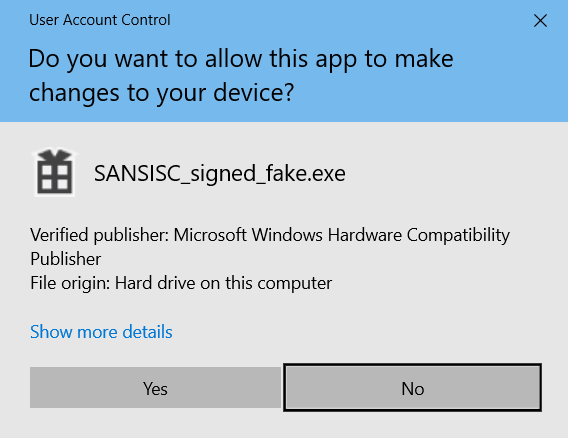 While a patched system will display the UAC prompt stating an unknown publisher.