Some years ago, I was preparing Cisco certification exams. I connected via SSH to a new Cisco router, and was presented with this familiar dialog: 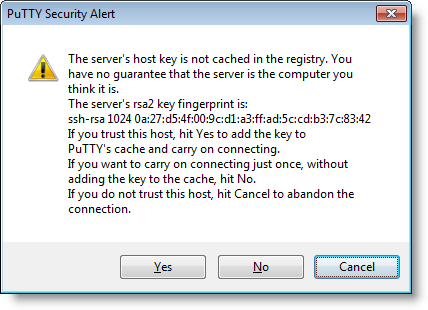 This made me think: before proceeding, I wanted to obtain the fingerprint out-of-band, via a trusted channel, so that I could verify it. So I took a console cable, logged on via the serial console, and … then I started to wonder what IOS command to type? A couple of hours later spend with Google, I was no closer to a solution. I could not find an IOS command to display the SSH fingerprint.

I found forum posts advising to connect via a crossover cable and write the presented SSH fingerprint down, but that’s not what I wanted. I had to work out my own solution. 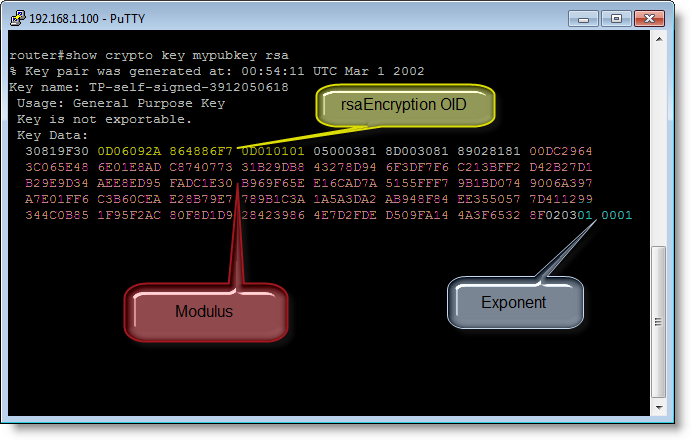 If you take the modulus and exponent of your public key, arrange them in another format (ssh-rsa) and calculate the MD5 hash, then you obtain the fingerprint.

Of course, I could not resist writing a Python program for that :-)

You can find it here.

If you know a Cisco IOS command to obtain the SSH fingerprint key directly, then please post a comment.

Update: on Cisco IOS versions released after I researched this, the "show ip ssh" command now displays the public key in ssh-rsa format (tested on 15.1(4)M3):

If you decode the base64 encoded ssh-rsa data, and calculate the MD5, you obtain the fingerprint.

Can you do "show ssh key rsa"?

You are linking to the documentation of the Nexus 1000V switch. Nexus runs NX-OS, not IOS. The command you mention isn't valid on IOS.

Nice post!
On devices that support the sh ip ssh command you can copy the key, create a new file and run ssh-keygen -lf ios.pub to calculate the finger print.

On you linux\*BSD box create a new file and paste the key in. Make sure it’s one long string with no wrap. In this example I used ios.pub as the file.

Then run the ssh-Keygen utility with the -lf options:

When I tried to connect to the device with SSH I received a message showing this key.