One, if by email, and two, if by EK: The Cerbers are coming!

"One, if by land, and two, if by sea" is a phrase used by American poet Henry Wadsworth Longfellow in his poem "Paul Revere's Ride" first published in 1861.  Longfellow's poem tells a somewhat fictionalized tale of Paul Revere in 1775 during the American revolution.  If British troops came to attack by land, Paul would hang one lantern in a church tower as a signal light.  If British troops came by sea, Paul would hang two lanterns.

Much like the British arriving by land or by sea, Cerber ransomware has two main routes from which to rob your critical data of its independence.  The first and most widely-used route is through email or malicious spam (malspam).  The second route is through exploit kits (EKs).

Am I comparing colonial era British troops to Cerber ransomware in our current cyber landscape?  You bet I am!  Is it an accurate comparison?  Probably not!

Nonethless, when I think of Cerber, I often think "One, if by email, Two, if by exploit kit."

Yesterday's diary reviewed Cerber through email, so I've already hung that lantern.  Today I'll hang another lantern as we look at examples of Cerber ransomware through EKs.

In my lab environment, I generally don't generate much Magnitude EK.  Why?  Because Magnitude usually happens through a malvertising campaign, and that's quite difficult to replicate.  By the time any particular malvertisement's indicators are known, the criminals have moved to a new malvertisement.

Since early October 2016, I've typically seen Cerber ransomware from the pseudoDarkleech campaign using Rig EK.  PseudoDarkleech currently uses a variant of Rig EK that researcher Kafeine has designated as Rig-V, because it's a "vip" version that's evolved from the old Rig EK.

EITest is another major campaign that utilizes EKs to distribute malware.  Although EITest distributes a variety of malware, I'll occasionally see Cerber sent by this campaign.

On Thursday 2016-12-15, I generated two examples of EK-based campaigns delivering Cerber ransomware.  One was from the pseudoDarkleech campaign, and the other was from EITest.  Both campaigns used Rig-V to distribute Cerber.

Shown above:  Flow chart for both infections.

Looking at the infection traffic in Wireshark, you'll find Rig-V with different domain names, but the same IP address both times.  For both infections, I could not reach the page for the Cerber decryption instructions.  The server didn't respond, and no HTTP traffic was generated by the Cerber ransomware.

Traffic patterns for Rig-V and Cerber haven't changed much since my previous diary covering the pseudoDarkleech campaign on 2016-10-14.  Only the domains and IP addresses are different. 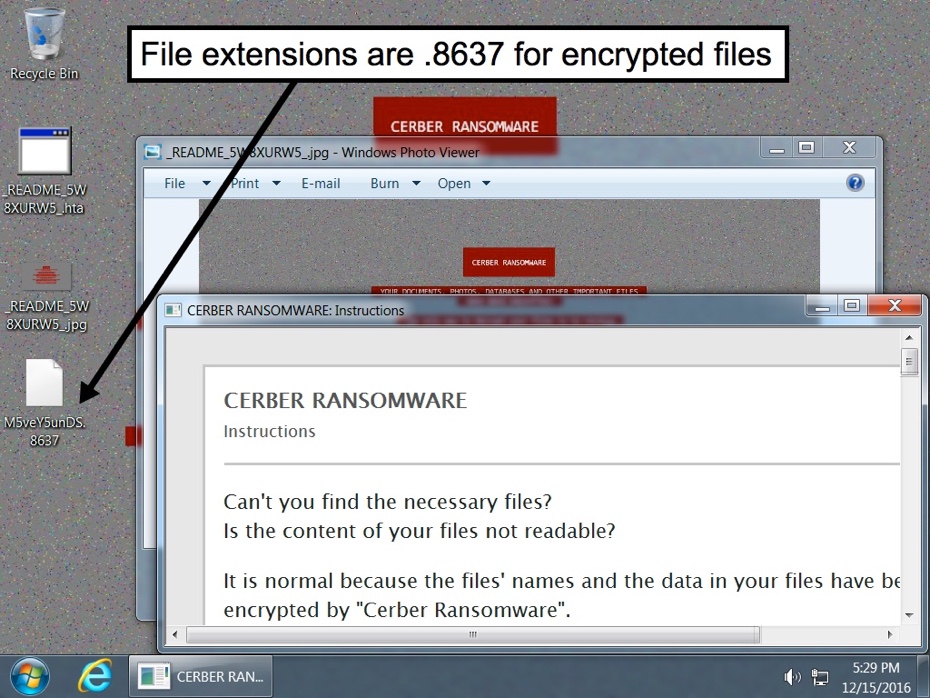 Shown above:  My copies of poems by Henry Wadsworth Longfellow...  All gone!

The following are IOCs for the infection traffic I generated:

The following are file hashes and other info for the Flash exploit and Cerber ransomware:

File description:  Cerber ransomware sent by Rig-V from the pseudoDarkleech campaign on 2016-12-15

File description:  Cerber ransomware sent by Rig-V from the EITest campaign on 2016-12-15

As always, properly-administered Windows hosts are not likely to be infected by pseudoDarkleech, EITest, and other campaigns.  As long as your Windows host is up-to-date and fully patched, your risk is minimal.  If you're running Windows 10, you have little to worry about.

Disabling Flash player, not using Internet Explorer, and running addons like NoScript are also options to help prevent infections from these EK-based campaigns.

Listen, my children, and you shall hear
Of an incident responder named Paul Revere,
On the 15th of December, in 2016;
Hardly a person is now alive
Who cares to remember that routine day and year.

Paul said to his friend, "If the ransomware march
By email or EK from the Internet to-night,
Hang a lantern aloft in the IDS appliance
For the SIEM panel to project as a signal light,--
One, if by email, and two, if by EK;
And I on the opposite shore will be,
Ready to respond and spread the alarm
Through every IT department and server farm,
For the company's folk to be up and to arm." 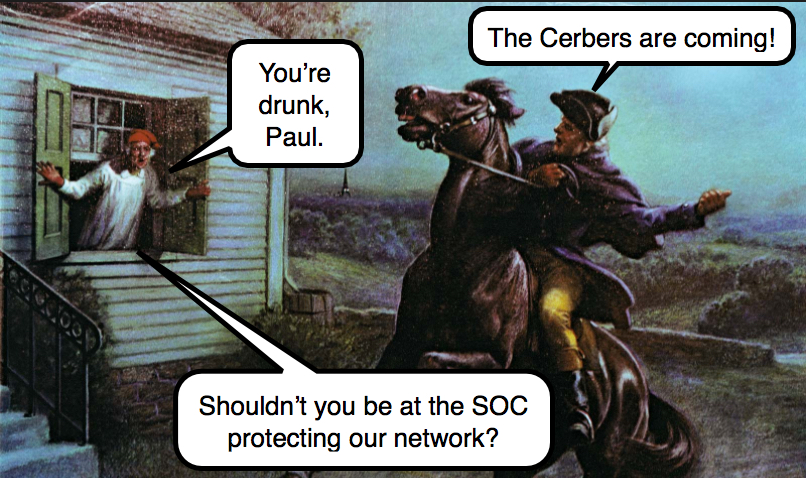 Shown above:  What really happened with Paul the incident responder.

Thanks for the wake-up laugh. It was a good way to start off a Friday when it's zero degrees outside.

Although, when I showed your cleverness to my wife, she gave me one of those looks again and replied "Shouldn't the cartoon bubble read "You're drunk, Brad."?" :-)

Brad...I bro-love you, man, but your puns hurt my brain this early in the morning.

[quote=comment#38579]Although, when I showed your cleverness to my wife, she gave me one of those looks again and replied "Shouldn't the cartoon bubble read "You're drunk, Brad."?" :-)[/quote]

That's funny... My wife told me the same thing!

Our wives must never be permitted to meet each other...