I have some personal CDs & DVDs to dispose of. And I don't want them to reamain (easily) readable.

There are paper shredders that also shred CDs & DVDs, but I don't own such a shredder.

So I ended up drilling a hole in my optical disks.

My recommendation: don't to this, it's difficult and hazardous. 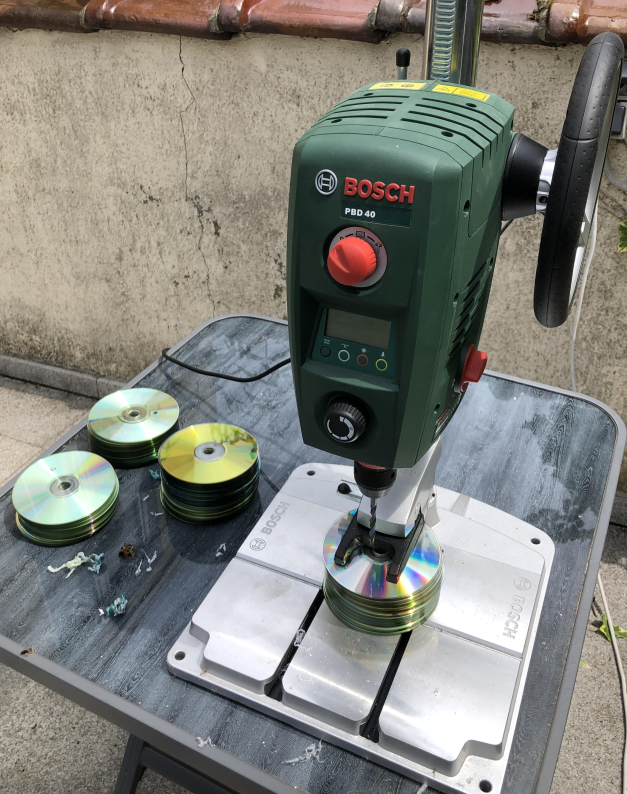 Even though I used a drill press with a clamp to hold the optical disks, I had disks that came loose and started to spin, with risk of flying in all directions.

That's because I drilled with a speed (around 2500 rpm) that was too high: it made the plastic meld, and got the drill bit stuck in the stack of disks.

A lower drill speed (500 rpm) solved that problem, the plastic no longer melted, but I still had small pieces of plastic and metal film detaching from the disks.

I drilled the hole close to the center of the optical disk, because I remembered that CDs and DVDs are written from the center to the edge. Assuming that data structures that describe the layout of the disk are found at the beginning, drilling a hole there would make the complete disk unreadable.

I tested one disk with a hole, and indeed, my drive was not recognizing any disk: 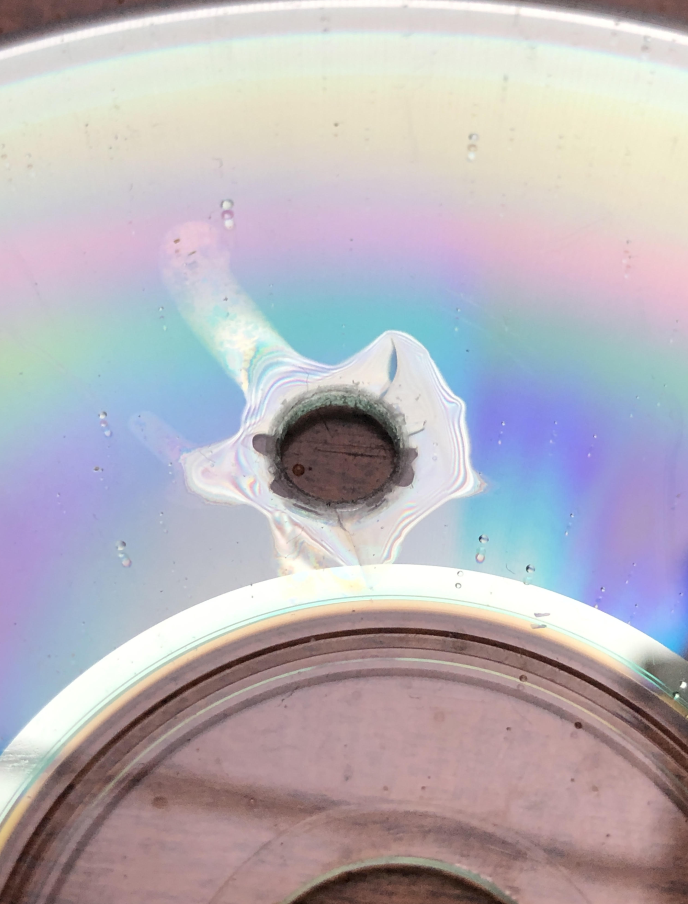 It's a difficult and hazardous process, don't do it. Especially not with a handheld power drill.

Put your discs in a microwave for a light show and total data destruction.

How about cutting them in half, for instance with a jigsaw mounted under a table, using a guided mounting apparatus like usually done in woordworking, to save fingers.
When it comes to hard drives, Zoz demonstrated quite amusing imaginative methods in DEF CON 23: see https://youtu.be/-bpX8YvNg6Y

While effective, doesn't that damage the interior of the microwave?

While effective, doesn't that damage the interior of the microwave?

This is also a great way to destruction of the microwave as well. Kind of a costly way to "nuke" the DVDs.

Slight correction on this approach - put your discs in SOMEONE ELSE'S microwave. This method is incredibly effective, visually appealing, and keeps the metallic taste from spreading to YOUR hot dogs next time lunch rolls around.

Someone I know may have done this exact destruction testing with lab-mates in the optical disc lab at a no-longer-in-existence optical disc manufacturer. The spiral arc-splosion of the material is very satisfying, and review with a very high powered microscope and a disc tester showed there was no chance any data survived the fireworks.

It's BBQ season, so when the wind's blowing away from everyone, a disposable tin tray and plenty of heat reduces the discs to something unusable.

I think it's common for optical discs to have redundant sectors so they can be read even when scratched. That might tender your drilled hole inadequate as a destructive method.

I have simplified my hard drive retirement by only putting encrypted file systems on them, so I no longer feel compelled to drill holes in them when they seem to have failed.

My recommendation would be to get a pair of sturdy working gloves (and safety glasses) and just snap them in half over a bin.

It's easy to do, does decent physical damage to the disk, requires very little investment in hardware and you should be able to do about one disk per second so even if you have a few hundred disks to dispose of it's still only a couple of minutes of work.

I prefer the good and old fire.