This is oledump's output for this file:

Although there is a VBA storage and all the usual streams associated with VBA macros, oledump does not display macro indicators (M or m).

In such cases, I always use option -i like this:

When you use option -i (--info) without options -s, an extra column is added to the overview of streams. For all VBA module streams, a value like c+s will be displayed in that column. c stands for compiled code and s for source code.

So now we know that stream 5, 15 and 17 are VBA modules, but that there's something unusual with them (otherwise we would see a macro indicator: M or m).

The first row is all NULL bytes (00), and the following 83 rows too. And then we have some binary data with a repeating ASCII string: 'fixed.

When I see this, I start to think that this is a malicious Office document that has been cleaned: the malicious code has been removed. Let's check, by taking a look at the compiled code and the VBA code separately. I'll start with the compiled code:

So this is indeed compressed ASCII text: a repetition of the line 'fixed.

But it is not VBA code compressed by an Office application, as it does not start with "Attribute VB_.." (option -v searches for VBA code staring with Attribute VB_...).

So this certainly looks to me like a malicious Office document where the VBA macros have been cleaned by an anti-virus program. But which AV?

We get a good clue by looking at the compressed data of stream 15:

That's the AV of Qihoo 360: 360 Safeguard. That's very thoughtful of the developers to add a message that helps me identify the AV product that did this.

So the module streams have been wiped: no compiled code and no source code. This maldoc can no longer execute.

But there are some other streams that contain compiled code too, like stream _VBA_PROJECT:

This one has not been cleaned. Let's take a look at the strings inside this stream: 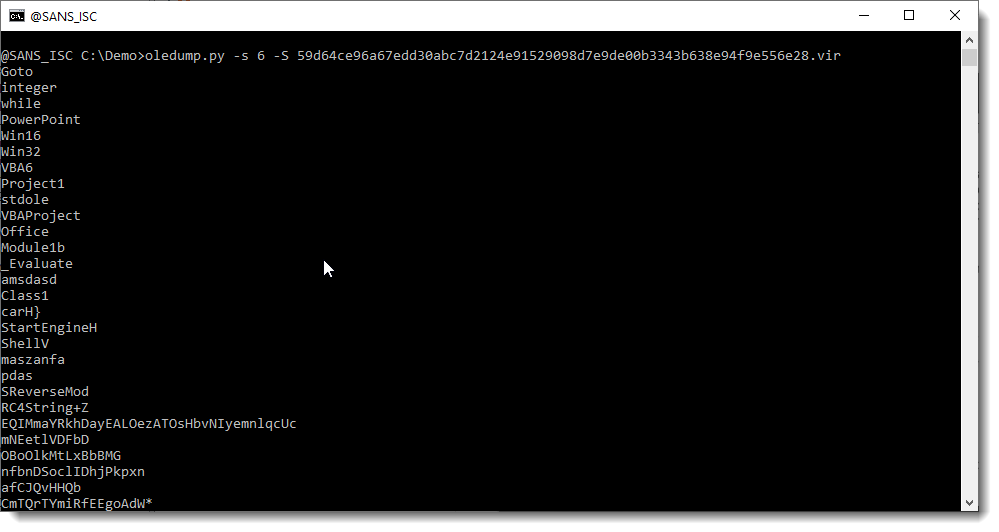 So we have ShellV and different strings that look like BASE64: this is probably a maldoc that executes a PowerShell command.

I tried to find back the original maldoc using the method I described in this diary entry, but I had no success.