To better detect any exploit attempts taking advantage of the recent Realtek vulnerability, I experimented with the open source VoIP server Asterisk. I just set it up, listening for inbound connections. The server had no existing accounts configured or connected to an upstream VoIP service. Using it for actual phone calls was impossible, but it would respond.

Even without exposing a VoIP service, there is always a trickle of SIP traffic, probing if something is listening. Here is a random packet from my home network:

This appears to be an attacker at 62.210.6.91 attempting to call a number in Israel."5", the digit following the country code, should indicate that this is a mobile number according to Wikipedia, with 56 being used in the Palestinian territories. But it may very well be that automated scripts use non-existing numbers and the standard responses for non-existing numbers to determine if a specific SIP server can be used.

Once I set up the Asterisk server, the attempts to connect immediately exploded (this is data from a /24): 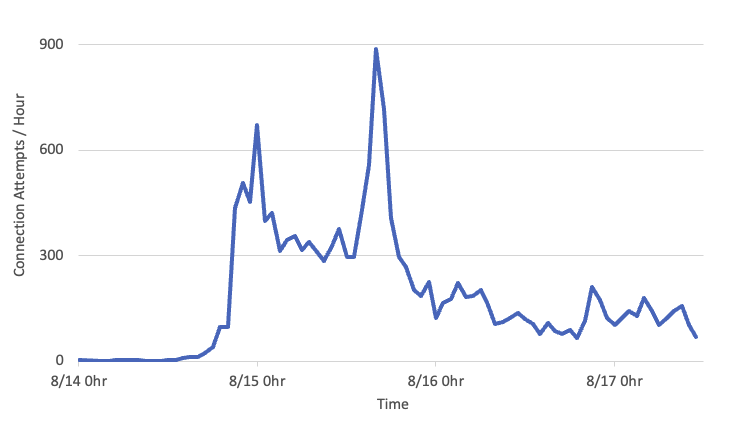 I was experimenting with the setup, which may explain the decrease after the first spike. These logs are also "sampled," so the number of connections was much higher.

The main attack I observed was brute forcing attempts. As I didn't set up an upstream provider, all calls were considered "local" by the server. A request like the above would result in an "extension not found" error. Throughout this experiment, I received 77,610 requests (about two days' worth of data).

There is no big and exciting lesson here. But the number of attacks you see may depend on what services you expose, and a SIP server appears to attract the scans like [insert witty analogy here].