Heartbleed, BlueKeep and other vulnerabilities that didn't disappear just because we don't talk about them anymore

Since new critical vulnerabilities are discovered and published nearly every day, it is no wonder that we (i.e. security professionals and security-oriented media) tend to focus on these and don’t return to the ones that came before too often. Unless there is a massive exploitation campaign, that is. This doesn’t present any problems for organizations, which manage to patch vulnerabilities on time, but for many others the “historical” vulnerabilities, which are not talked about anymore, still pose clear and present danger.

In my last post, we looked at the number of machines connected to the internet, which are still affected by CVE-2020-0796, also known as SMBGhost. Since the number was surprisingly high[1], it got me thinking about how high the numbers might be for other (and older) high-impact vulnerabilities.

Since I don’t have access to any tool, which would come even close to the ability of the Carna botnet to scan the entire internet in reasonable time[2], I’ve decided to go with Shodan once again and ask it for the numbers of machines vulnerable to specific CVEs.

To this end, I’ve put together a list of about a hundred high-impact vulnerabilities, which were discovered before 2020 and which might potentially be scanned for by Shodan. The list was mostly made up of relevant vulnerabilities from different “Top CVEs” lists[3,4] and vulnerabilities I found to be interesting in my previous searches. The list was therefore far from comprehensive, but I do believe the results for the top 10 most common vulnerabilities it included are worth a look.

The numbers reported by Shodan were generally higher than I would have expected. Nevertheless, although it is true that Shodan results aren’t necessarily fully up to date or completely accurate, I’ve tried to validate a small subset of the detections manually with relevant Nmap scripts (those, which were not too intrusive) and most of my findings agreed with the results Shodan provided.

Although all the CVEs listed in the table are certainly noteworthy, the ones which I was particularly surprised to see, given their prior media coverage, were:

Unfortunately, I don’t have data for the historical development of the number of machines affected by Hearbleed, but I can offer you a look at how the numbers changed for BlueKeep over the last 12 months. 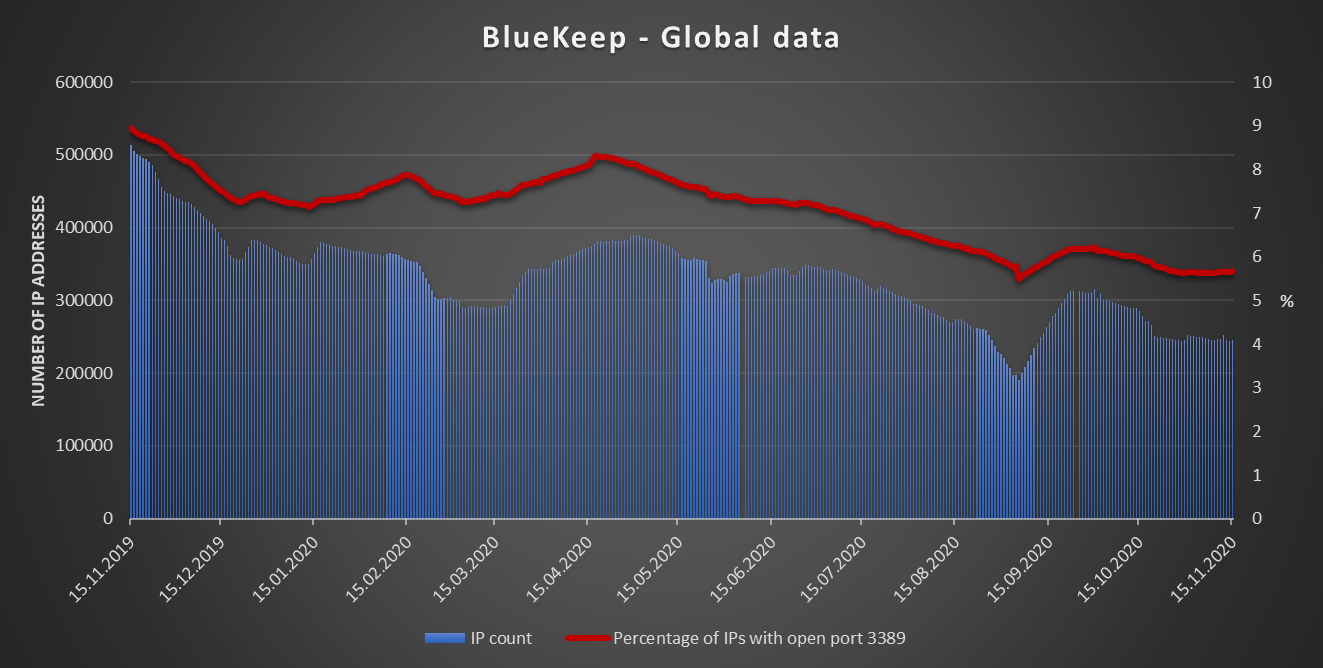 Although, as the chart shows, there has been a significant absolute as well as relative decline in the number of BlueKeep-affected machines accessible from the internet, there still appear to be over 240 000 of them. Given how dangerous and well known BlueKeep is, it rather begs the question of how many other, less well-known critical vulnerabilities are still left unpatched on a similar number of systems.

And since any of these might potentially come back to haunt us one day, this would seem to be a question worth asking…

After looking through all the CVEs published so far and identifying those, which Shodan was capable of detecting, I wrote a short follow-up to this post, discussing the vulnerabilities found most often on publicly available systems. You may find it at https://untrustednetwork.net/en/2020/11/18/most-common-vulnerabilities-based-on-shodan/.

The number of scans a day I get for port 445 is mind boggling, that and the number of wp-login attempts... :/

Edit: apparently sans doesn't like emojis, emoticons it is then.