While hunting some phishing emails these days, I came across a malware campaign similar to EngineBox, a banker capable of stealing user credentials from multiple banks [1]. XPCTRA, as I call today’s variant, in addition to banking data, steals online digital wallet users’ credentials from services such as Blockchain.info and PerfectMoney.

The malspams used in the campaign try to induce the victim to open a supposed bank bill link. It actually leads to the download of the XPCTRA dropper, that is, the part of the malware responsible for  environment recognition and downloading new components. Once executed, it initiates a connection with an Internet address to download other malware parts responsible for later malicious actions.

In this diary, I present the XPCTRA analysis the indicators of compromise used in this campaign.

Unlike the previous variant, XPCTRA (read it like “expectra”) does not make use of as many layers of encoding as EngineBox did to try bypassing security layers, which made the analysis simpler.

Look at the diagram shown in Figure 1 and the textual description below to understand the threat flow, from malicious e-mail to data theft: 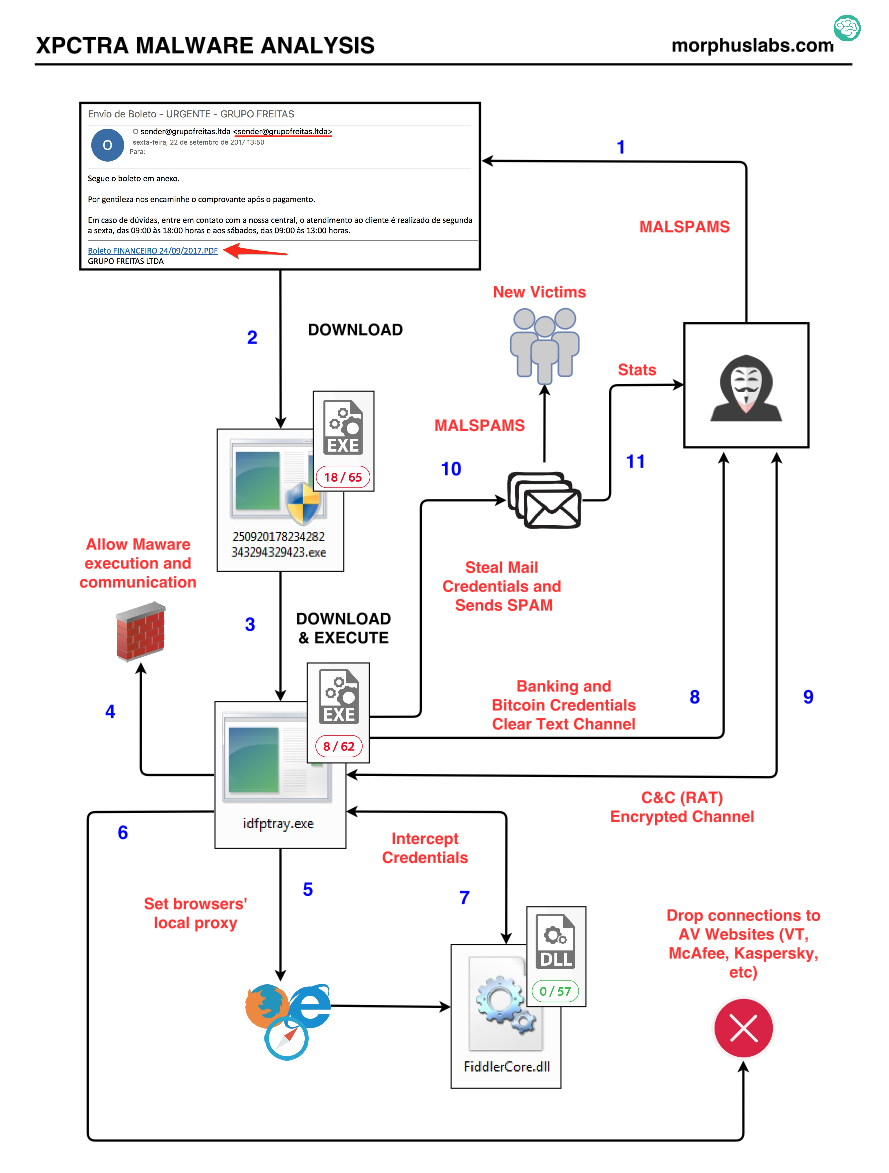 NOTE: The XPCTRA sample analysed here (idfptray.exe) was not yet known by VT (VirusTotal) until my submission.

After posting EngineBox malware analysis [1] last month, through community feedback, I came to know that the threat embedded a framework called Quasar RAT [2] developed in C#. The goal of this framework is to provide a tool for remote access and management of Windows computers— hence the name, RAT (Remote Access Tool).

It turns out the variety of functions the open-source framework has, such as remote desktop, keylogger, etc., made it quite attractive for cybercriminals who ended up using it as a RAT (Remote Access Trojan) tool within their malware.

Notice in Figure 2 the similarity of Quasar RAT directory tree on the left, and the XPCTRA code on the right. 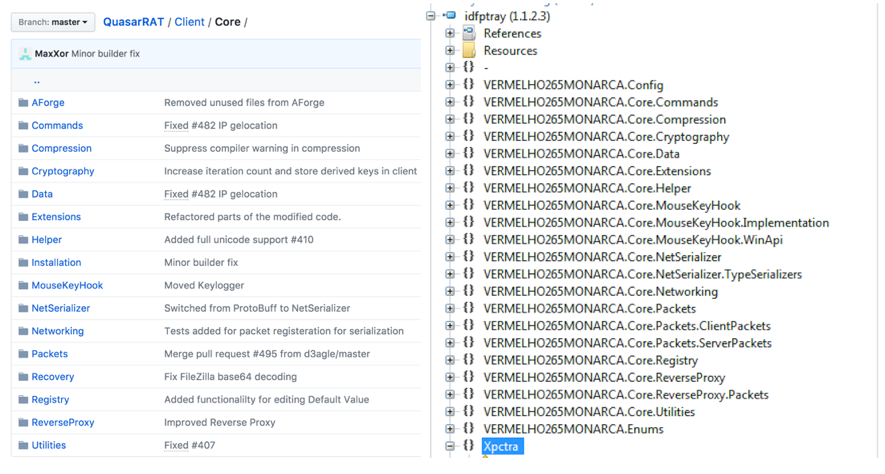 In addition to Quasar, XPCTRA incorporates Fiddler to play the role of HTTP Proxy and, of course, the code responsible for intercepting communications with financial institutions and sending SPAM as well.

In addition to banking credentials, XPCTRA is able to steal digital currency wallet’s credentials hosted online like Blockchain.info, PerfectMoney and Neteller. Look at Figures 3 and 4 for code snippets of capturing moments and sending user credentials from some of these institutions. 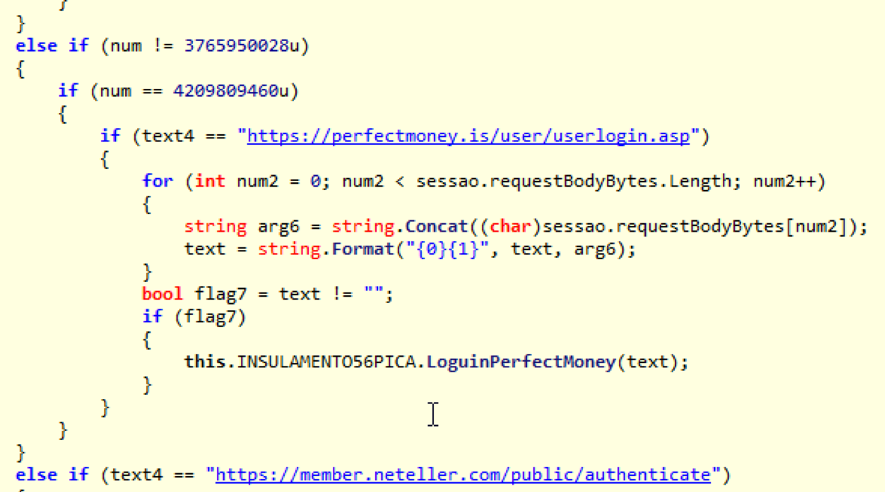 The result of this analysis draws our attention to the security of digital currency wallets, especially those “hosted” in the cloud. Just as customers of traditional financial institutions have faced over the years the most diverse fraud attempts and had to protect themselves, so should digital money users. Give preference to services that offer a second authentication factor for transactions and be sure to enable it.

Back to Basics: Writing Change Requests in Natural Language

Back to Basics is a new series focusing on the boring stuff. Tweaking and tuning the things we already do. In these articles we will discuss things that have worked and tips to get them working. This diary will focus on change requests. (see, boring …)

There are several great resources that outline change requests process and or how to stand up a governing policy [1] [2]. Some ‘googleFu’ will get you started and on the way to a decent program. One thing that reminded me of teaching days in Security Leadership (MGMT 512) is how changes are written. Imagine some senior business executive calls and says “Hey we have XYZ App launching tomorrow and the ABC team can’t seem to get to N” and so begins the classic argument of ‘if we could just get those security folks out of our way, we could do our jobs.’ Yes, in 2017 that sentiment still exists.

Instead of telling business executive “There is no way I’m putting that rule in the firewall!” a better conversation to have would go something like “So you want all users to have any access to the server from anywhere at anytime?”

Now before we get excited and think that the conversation will go our way, hold on! Said executive may not have the full picture and may say “Yes, we need this up now.” According to Dark Reading and probably many other sources the number one of the top five firewall mistakes happens to be *ding ding ding!* broad firewall policies [4]. “Okay Mr. ‘So in So’, this is outside of normal policy and change request procedures, I’ll need two executives to approve it and sign off on this. Can we remove this policy after some investigation?”

Referencing both National Institute of Standards and Technology (NIST) and SysAdmin, Audit, Network, Security (SANS), they state include as much information as possible [1] [2]. The goal here is to enhance that with some natural language.

Mr. So in So, Vice President of Such in Such, in concurrence with Ms. Such in So, Vice President of Something, have agreed that the new Widget Money Making Service firewall policy rule that follows is approved. ‘All users and all applications on any port at any time from anywhere can access the Widget Money Making Service.’ This firewall policy will remain in effect indefinitely.

The natural language idea may not be new? That is why we are getting back to boring basics, Having seen the above scenario play out a short time ago, it needed to be brought back up. In the above case, using natural language gave one of the two executives a moment of pause and it actually worked. Instead of giving into the software developers, the business leader asked them “Do you really need all that access?” This author was not around for the answer, however, noted the impact natural language had on the change.

Back to Basics Tips: Change Requests in Natural Language

Let us know if you attempt this, and what the results are?