Brute forcing SMTP credentials is hardly new. But I have seen a couple of odd patterns lately in one of my mail servers, and was wondering if anybody has any insight into these patterns. For this diary, I am using logs starting May 31st until today. 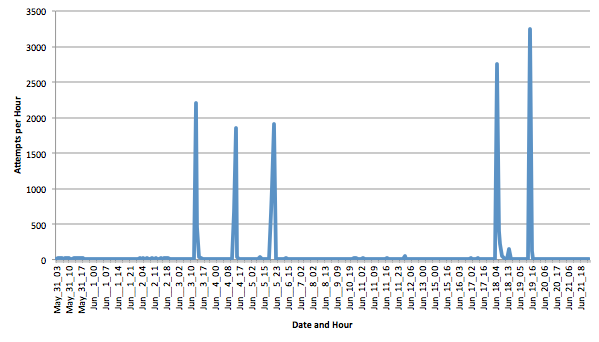 The usernames are where it gets a bit more interesting. Here is a list of the top 20:

The part that is of some concern is that a couple of the users are actual users of the server. The "ranking" goes somewhat by the amount of e-mail created by the user in general, so it is possible that spamers do try usernames they already have in their database against mail servers used by their domain. I don't capture passwords, but the number of attempts for most of the usernames is small, so I assume only a couple of passwords are used. The first and third name are odd as they look "random". Could they be used to detect if the mail server responds differently for users that do not exist?