Last week, we discussed why you'd want to do passive vulnerability scanning at strategic points in your network https://isc.sans.edu/diary/Scanning+without+Scanning/17189, and which tools you might commonly do that with.  After some reader feedback, I thought we'd discuss just exactly how to do this with both p0f and PVS.  Both packages we're discussing have a gotcha or two, so it's worth a "how-to" from start to finish.

And, to paraphrase the Dos Equis guy: "I don't often install an OS on bare metal, but when I do, it's usually a hypervisor".  So today's discussion will cover off two methods to do passive scanning of a network segment's traffic inside of a VM.

In this section we'll cover off installing and running p0f, a free passive "fingerprinting" scanner.

First of all, both Security Onion and Kali both come with an older (v2.08) version of p0f.  I chose to install the newer version, 3.06b, downloaded from http://lcamtuf.coredump.cx/p0f3/

The first thing that you'll notice is that the install is a bit strange - it's got a bundled "build.sh" installer which checks dependancies then installs.  The kicker is that no matter what, it tells you that libpcap isn't installed - even though you KNOW it's there!  After finally breaking down and running "vi README" and still getting nowhere, I realized that if I had read the actual messages from build.sh, I would know that it needs the development libraries from libpcap.

To get these (in ubuntu), run "sudo apt-get install libpcap-dev".  NOW you can likely run build.sh successfully!

Next, on to running the app.  p0f runs by sniffing the network and then reporting on what it sees, so you need to give it something to see.  The easy way to do this is to set up a SPAN port on your switch so that traffic from elsewhere is "mirrored" to the p0f port.  In this setup, I'm monitoring all traffic on the "family" segment (vlan 1) of my home network.  On a cisco switch, this will look similar to:

If you put p0f into a virtual machine, be sure that you either:

a/ dedicate an ethernet to it using vt-d (called DirectPath I/O in ESXi)
or
b/ enable promiscuous mode in the virtual switch or port group.  Since I've got multiple sniffers on my ESXi host, I chose this second option.  I created a dedicated "PROMISCUOUS" vSwitch for this purpose, and attached it to the vNIC attached to the physical switch port g0/2, then set the port group to allow Promiscuous mode.   If you are monitoring several VLANS, be sure to put the port group into VLAN 4095 (which tells VMware that the VM will correctly handle tagged frames for multiple VLANs).  When done, the vSwitch config looks like:

NOW you're ready to run the app.  There are a few different modes to run in.

The basic text output from "sudo p0f -i eth0" will look like: 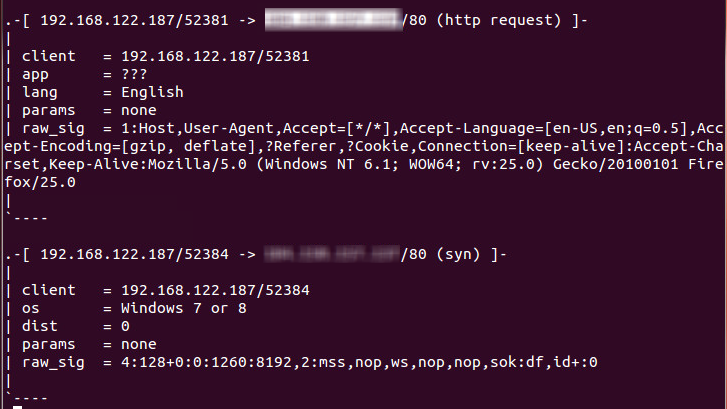 This basic "dump to the screen" mode gives you nicely formatted text, but after a few minutes of watching it whiz by you'll realize that this will be impossible to parse into a spreadsheet or database or really do much useful with.  You probably want to output to a file, which will create a CSV file that you can parse into a spreadsheet or database table, using "pvs -i eth0 -o pvsout.txt".  Finally, you can also run p0f against an existing saved PCAP file:

So, what did I find?  After importing into excel and playing with the data: 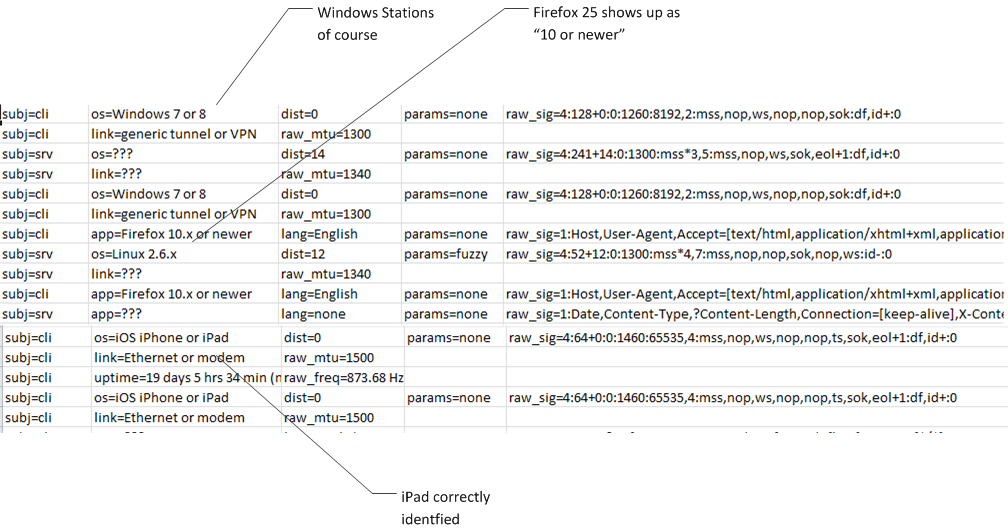 Because we used VMware's promiscuous mode support for p0f, I chose to dedicate a NIC using VT-d (DirectPath I/0 in ESXi speak) for PVS.  After cabling the NIC (and before I forget), set up the second monitor session on your switch to allow vlan-wide packet sniffing - so, on the switch:

(again, it's in cisco-speak, but everyone's switch monitor syntax is fairly similar)

Back over the VMware, we need to determine which NIC we can use to dedicate to the VM.  In our case, it's vmnic3.  We'll then use the vCLI to determine which PCI device number is associated with that NIC (we'll need this number in the next step).  You can install vCLI on your laptop (the preferred method by far), or run these commands within the hypervisor's CLI if you have that enabled. 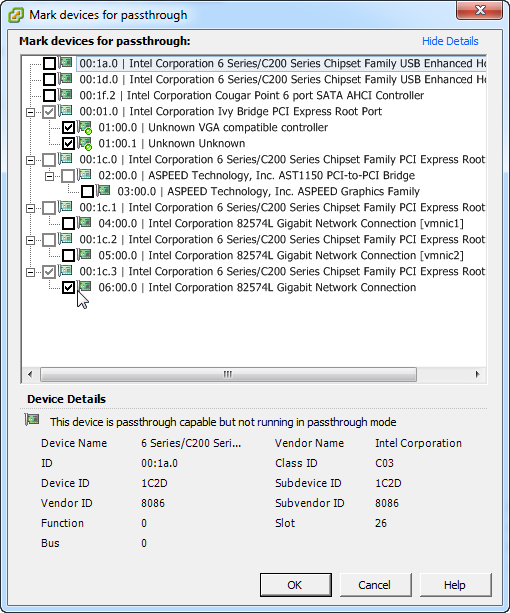 Note that you'll likely see a little red "reboot" icon over the device after it's set up - this indicates that the ESXi host needs a reboot to finish the process.  It's so rare that we need to reboot these that it caught me by surprise - good thing it's in my home lab, all I need to book around is my wife using the DLNA server and my kid using the minecraft server.

Finally, over to the VM.  Add a device, and instead of an Ethernet adapter, we'll select "PCI Device", and choose the ethernet NIC we just reserved. 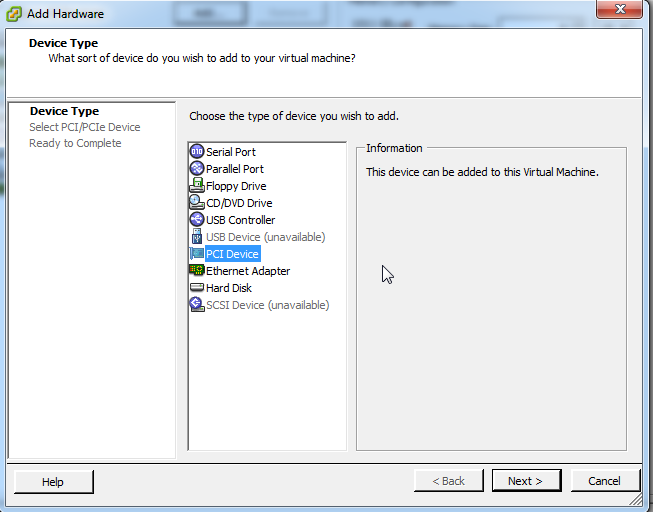 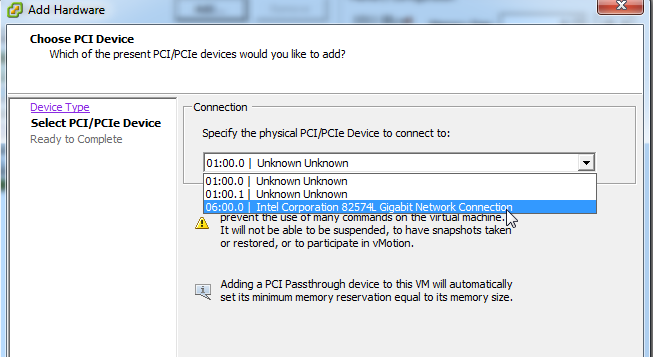 Before you start the install of PVS, be sure that you have MS Visual C++ installed (any version, i used the redistributable 2010).  If this is a new VM,  C++ likely won't be installed and the PVS install will complete with no errors, but it won't work - the PVS install does not check dependancies for you.

Once the install is done, fire up your services list and start "Tenable PVS Proxy" service.  The install app won't start this for you.

THe final configuration steps are in your browser - browse to https://localhost:8835 - you'll need to identify the network list to be monitored (192.168.122.0/24 in my case), change the default admin/admin credentials, and also identify which interface is "sniffing".  Since they represent this in the NPF notation, I cheated and used Wireshark to figure out which interface was which.

Once installed, the PVS output was pretty much what I expected.  I fired up a few ssh and browser sessions on my laptop, hosts and clients where properly identified, the only risk that showed up was my DLNA server was running UPNP - which i need to chase down, I'm not sure it's needed or not.  The basic monitor screen shows a colour-coded screen by host: 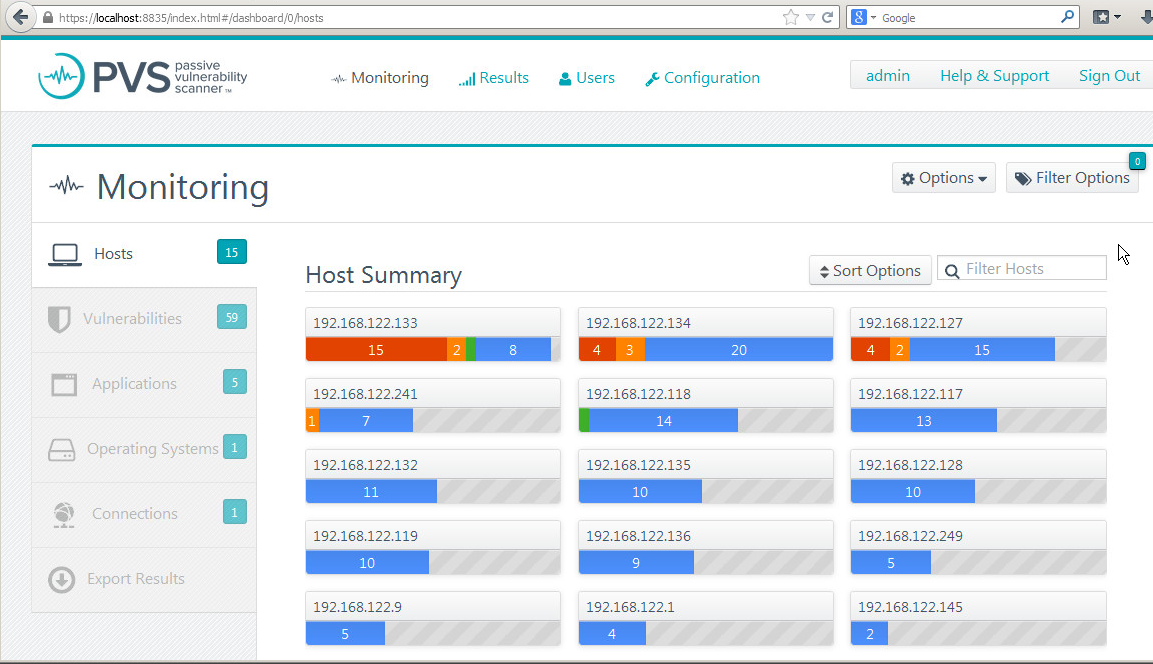 But then I fired up some internet functions on our TV, and immediately got a screen full of red.  Not only is our TV running an old version of Opera, but it's got an XSS vulnerability!  Oh, and it's also running UPNP (no surprise there).  I think it's time to update my TV! 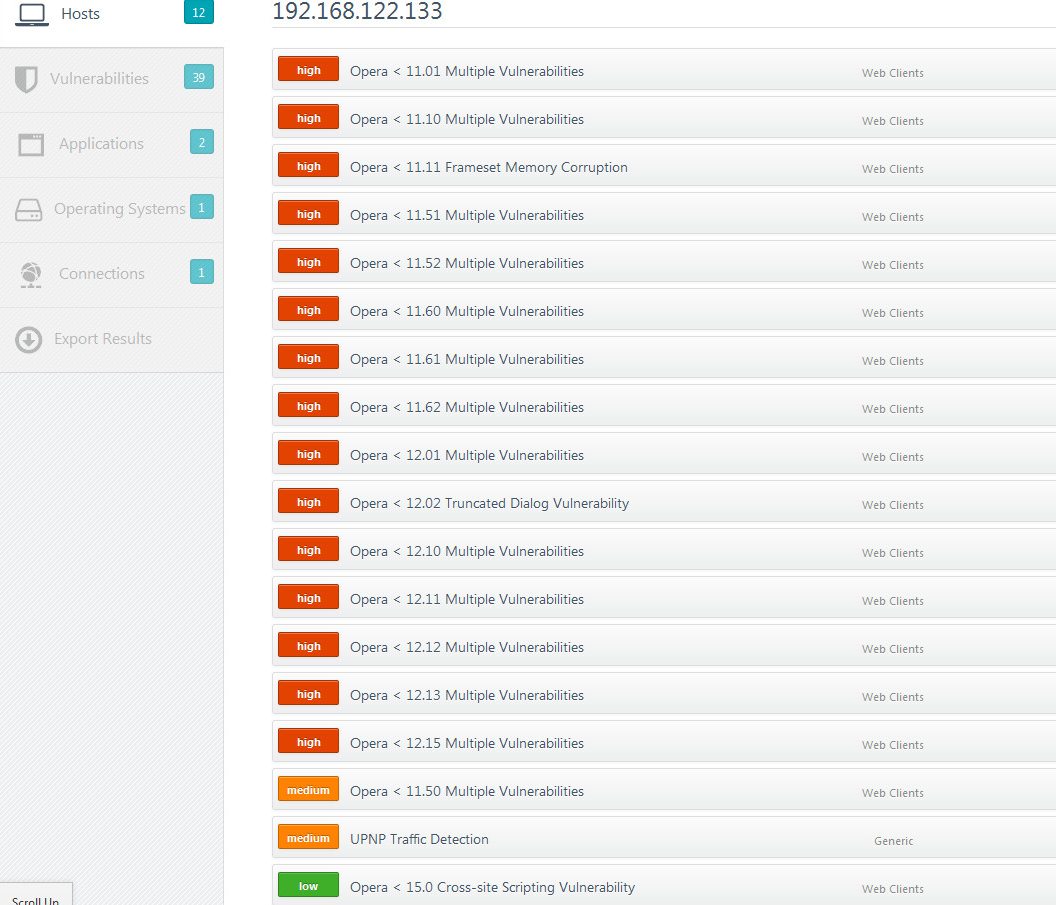 It also found the Flash versions on all hosts that had flash.  This in itself is worth the price of admission on a corporate network!  As time goes on, you'll see more and more applications that generate network traffic show up in the list.

An interesting situation is that in the vulnerability page, PVS identifies all of our i-devices (and we have a bunch), but Apple IOS is not listed in the discovered Operating Systems page.    It was nice to see that it could tell an iPod from an iPad.  Each of these findings has more pages of detail behind it of course.

As in any scanner, there was one false positive.  The DHCP server that I have running on my ASA Firewall was mis-identified as a vulnerable ISC DHCP server (from isc.org, not isc.sans.edu), but as with any scanner, system log or monitoring tool, you need to a/ look at the results and b/ apply some thought to the results, so a false positive here or there is much better than missing information entirely (false negatives).

The main "monitor" screen is a close to real-time display, with a short memory (you can configure the retention times).  This is a good thing in a corporate environment, as mobile devices on a network today might be on a different network in an altogether different location tomorrow.  There is a "results" tab that snapshots results at regular intervals (also configurable), so that you still have access to historical content.

While PVS found things on the network that p0f did not, the reverse is also true.  The major difference for me was the data presentation.  If you are short of time (which I think we all are), a colour coded display that lays everything out has a lot of value.  On the other hand, if you need to get into the weeds, the logs from p0f provide a lot more detail than PVS graphical screens do.  Mind you, the volume of raw data that comes with it makes weeding through the data a challenge, and until you get some scripts that suit your requirements it can take a lot of time.

A final note - if you use PVS and are yearning for the hundreds or thousands of log entries per day that p0f would give you, you can configure PVS to cough up that raw data as well.  More correctly, you can configure it to syslog it for you - there are separate settings for a "realtime syslog server list" and a "vulnerability syslog server list".  An important note on these settings, just punching in your syslog server IPs into these fields will not work, you need to include the listening ports:

If you use a different passive scanning tool, or have found something *interesting* while running passive scans on your network, please share on our comment form

All in all, this was a fun little bake-off, I'll be leaving both products running on my home network long term.  I hope you have as much fun installing one or both on your home network (or even better, your network at work) over the holdays!

Brian Krebs has a nice write-up on the Credit Card data breach at Target US ( http://krebsonsecurity.com/ )

The interesting thing for me in this story is that it affects US locations only.  The reason that this is interesting is that the data that was stolen was all mag-stripe data.  This mag-stripe data is much less useful on a  CHIP+PIN card, which is used in pretty much every other country on the planet.  We'll continue to see credit card attacks focus on countries that make it easy - while of course you can steal / duplicate a chip+pin card, for a criminal it's so much easier to simply skim a mag stripe and take the win.